Rasmussen reported last Friday that 52% of likely voters approve of Obama’s job performance. This number is both astonishing and depressing. The avalanche of Obama’s failures both domestic and foreign should have buried this presidency months ago. Yet despite the slow-motion implosion of Obamacare now catching the attention of even the court-journalists of the mainstream media, millions of American voters still think one of the worst presidents in modern history is doing a good job. 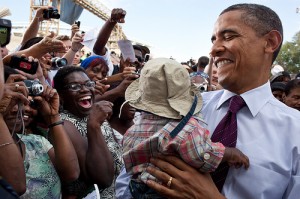 In any other administration, even without Obamacare, the litany of scandal and bungling would have politically crippled not just Obama but the Democrats as well. The murderous gunrunning of the Fast and Furious debacle, Attorney General Eric Holder turning the Justice Department into the Democrats’ Luca Brasi, the out-of-control EPA waging its economy-killing war on carbon, the National Labor Relations Board unleashed to browbeat business and revive a moribund labor movement, the SEC shaking down banks for billions, the IRS targeting political opponents, the trillion-dollar “stimulus” spent to achieve the worst economic recovery in history, the trillions more borrowed and created out of thin air to finance entitlement spending and payoffs to political cronies––and that’s just domestic policy.

Add the outrageous incompetence and indifference that got 4 Americans murdered in Benghazi, the subsequent lies and cover-up for political advantage, the waste of American money, toil, and blood in Iraq by the precipitate withdrawal of our forces, the likely reprise of that malfeasance in Afghanistan, the alienation of allies like Egypt, Saudi Arabia, and Israel, the cozying up to the genocidal Muslim Brotherhood, the appeasement of the equally genocidal mullahs in Iran, the groveling to a rampaging Russia, the whole Syria “red line” humiliation over chemical weapons––any one of these foreign and domestic fiascos would have inflicted serious political damage if we weren’t living in the alternative political universe in which we suddenly found ourselves on January 20, 2009.

It’s easy to blame an obviously biased and politicized media determined to ignore or downplay Obama’s incompetence. Skeletons in the closet like Jeremiah Wright and terrorist Bill Ayres have been ignored, gaps in Obama’s personal biography left unfilled, and evidence for his alleged brilliance like college test scores and transcripts left in the dark. By fiat he has been declared the most intelligent president ever, the media reflexively agreeing with his estimation of himself as the smartest guy in every room despite ample evidence to the contrary. More mysterious are the assertions of his rhetorical prowess, which are average at best when he reads a teleprompter, but non-existent whenever he speaks ex tempore, when every third word is followed by “uh-uh-uh.” Barefaced lies, obviously duplicitous spinning of mistakes and scandals, blatant double standards, passing the buck to George Bush, and shameful self-contradictions have all been rationalized, ignored, or explained away by the media. The self-proclaimed watchdogs of the public weal have become lapdogs, fawning over their master while snarling and snapping at his political enemies.

So yes, a corrupt media have contributed to Obama’s continuing popularity. Just compare the media’s treatment of the Watergate scandal with their indifference to the IRS’s use of its power to give the Democrats a political advantage during a presidential election. Watergate was a minor political scandal of the sort that can be found on every page of American history. It didn’t make a difference politically, as Nixon was on his way to a landslide victory in any case. The same Europeans who would later snicker at America’s high dudgeon over Bill Clinton’s sordid sexual hijinks with an intern felt the same way about our hysterical reaction to Watergate––another sign of America’s provincial moralism and naiveté. Yet self-righteous liberals and their media hacks elevated this two-bit scandal into the greatest threat to the republic since the Civil War. Watergate became a mythic narrative illustrating the fascist instincts of Republicans and the nobility and bravery of the media, even though all the Washington Post did for the most part was give the public information fed to reporters from a disgruntled FBI functionary.

Compare that to the IRS’s using its regulatory power to intimidate and silence political rivals of the president, betraying the public trust and tarnishing their duty as public servants. And unlike Watergate, the IRS did have an impact on the election by taking many Republican-friendly organizations out of the game. Yet here we are months later, and all that’s happened is Lois Lerner is now enjoying a cushy retirement after pleading the Fifth before a House committee and lying serially to the country. No one has been held accountable, and the media have spent more time on Miley Cyrus’s twerking prowess and Kim Kardashian’s impending nuptials than on getting to the bottom of this blatant misuse of taxpayer-financed government power.

Having said all that, however, we still can’t let those 52% of likely voters off the hook. These days too many alternatives to the mainstream media, from Fox News and NRO to Rush Limbaugh and Ann Coulter, exist for anyone truly interested in learning the truth ignored or distorted by the legacy media. Those who want to know will know. Yet many Republican Party operatives, refusing to hold the people accountable, have been more eager to blame some in their own party rather than admit that millions of Americans simply don’t want to listen to the Republicans’ message. Old Senate dinosaurs like John McCain validate the media caricatures of the Tea Party as extremist “wacko-birds” and slack-jawed racists, and then settle down to try and cut deals with the Democrats over big-government monstrosities like comprehensive immigration reform. Or Republican consultants, presumed masters of political tactics and strategies, call for better “messaging,” as though millions of Americans just don’t know about Benghazi, the IRS, the cancerous national debt, or the myriad other scandals.

They know all right. They just don’t care. And if they don’t know, explaining it to them won’t make much difference. Either they’re on the government dole and happy to stay there, or they have drunk the Progressive kool-aid and are intent on committing intellectual and political suicide.

Saying this angers many Republicans, who think these folks just need some explaining to see the light. But too many alleged conservatives have forgotten the profound distrust of the people underlying the Constitution. The Founders endorsed the maxim of Machiavelli: “It is necessary to whoever arranges to found a Republic and establish laws in it, to presuppose that all men are bad and that they will use their malignity of mind every time they have the opportunity.” That’s why the Founders gave the people freedom, but limited it with numerous checks and balances, many of which have been weakened, not the least being the limited government that makes it difficult for ambitious elites to corrupt the people with government handouts and redistributed property.

That Constitutional horse obviously left the barn a long time ago. We have become what Churchill once called “Government of the/by the/for the dole-drawers.” So as long as the government checks fill the mailboxes, the EBT cards work, satellite television delivers the shows, the Cineplex offers the latest special-effects extravaganza, and the shelves of Walmart and Whole Foods stay stocked, the people will shrug off Obama’s lies and failures and keep on amusing themselves to political death.

Republicans need to drop their mantra that this is a “center-right” country of natural conservatives who just need some tutoring to recognize their own best interests. And they need to accept that Obama’s failures won’t damage his success until the grievous costs of those failures start concentrating enough people’s minds by hitting their wallets. The rolling disasters of Obamacare look more and more like they may do the trick. Then people might be more receptive to our founding ideas of limited government and fiscal prudence.