The former hope-and-change president no longer gets a pass.

By 1968, President Lyndon Baines Johnson was finally done in by his “credibility gap” — the growing abyss between what he said about, and what was actually happening inside, Vietnam. 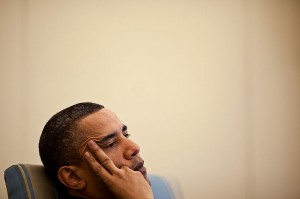 “Modified limited hangout” and “inoperative” were infamous euphemisms that Nixon-administration officials used to mask lies about the Watergate scandal. After a while, few believed any of the initial Reagan-administration disavowals that it was not trading “arms for hostages” in the Iran–Contra scandal.

George H. W. Bush thundered during his campaign that voters should “read my lips: no new taxes,” only to agree later to raise them. Bill Clinton’s infamous assertion that he “did not have sexual relations with that woman” was followed by proof that he did just that with Monica Lewinsky.

The George W. Bush administration warned the nation about stockpiles of weapons of mass destruction in Iraq and never quite recovered its credibility after the WMD were not found. No one believed Bush when he told incompetent FEMA deputy director Michael Brown that in the midst of the Katrina mess he was doing a “heck of a job.”

Yet the distortions and lack of credibility of the Obama administration have matched and now trumped those of its predecessors. The public may have long ago forgotten that Obama did not close down Guantanamo as promised, or cut the deficit in half by the end of his first term, or stop the revolving door of lobbyists coming in and out of the executive branch.

The public may even have forgiven the president when the stimulus bill never lowered unemployment as promised, or when his misleading boasts about vast increases in oil and gas production came to fruition despite, not because, of his efforts.

But the distortions and broken promises have now become so frequent that many at home and abroad are finally tuning out the president. Almost nothing promised about the Affordable Care Act is proving true. Contrary to presidential assurances, Obamacare has not lowered premiums or deductibles. It will not reduce the deficit or improve business competitiveness. It really will alter existing health plans and in some cases lead to their cancellation. Signing up is certainly not as easy as buying something online on Amazon.

First, the economy must be robust to offset the deception. Voters rejected the first George Bush for deceiving them, largely because the economy tanked in 1992. Yet the public did not turn on an impeached Bill Clinton, since the economy was quite robust in 1998. Watergate’s lies came at a time of oil embargos and stagnation. In contrast, Reagan survived Iran–Contra because of the boom years.

Second, we expect presidential mendacity to be sporadic rather than serial. By 1968, even when LBJ told the truth, no one listened. In 1973, no one believed anything that the Nixon administration asserted.

Unfortunately, Barack Obama has presided over five years of continued economic sluggishness that have not diverted attention from his administration’s disingenuousness. If unemployment were down to 5 percent, the gross national product growing at 4 percent, and the budget nearly balanced, we might have forgotten about the Benghazi cover-up, the monitoring of AP reporters, the politicization of the IRS and its vast overpayment in income-tax credits, the NSA disclosures, and the Syrian mess. Or if Obama had spoken untruthfully only once, made false promises just twice, or offered empty boasts merely three times, he might have been forgiven.

If Republicans agree to pass a comprehensive immigration-reform bill, can they be sure that Obama won’t suspend “settled law” on border enforcement, as he did with the employer mandate? If Secretary of Health and Human Services Kathleen Sebelius assures us yet again that Obamacare is suffering from a mere glitch, why should we believe her?

For that matter, will a Saudi ambassador or an Israeli diplomat now trust Obama when he swears that Syria’s next use of chemical weapons will cross a red line, or that another newly discovered secret Iranian nuclear facility is a game-changer?

Will German chancellor Angela Merkel listen to Obama when he insists that the NSA did not monitor her phone? Would the American public trust administration officials if they stated on television that the next attack on a U.S. embassy was due to anger over a mere video, or that Guantanamo would be closed in 2014?

Obama understandably came into office with a sense of immunity. His personal story and nontraditional background made him an emblematic figure. An enthralled media had unfortunately redefined its role as an appendage to, rather than an auditor of, the presidency. After the unpopular Bush administration, even Obama’s empty “hope and change” platitudes were considered deep.

Yet after nearly five years of scandals, untruths, and hard economic times, a now-ignored Barack Obama has finally learned that even an iconic president can tell one too many untruths.