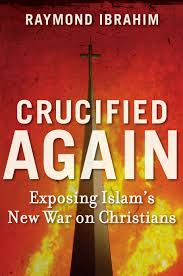 Throughout  the Muslim world from Morocco to Nigeria to Indonesia – and even occasionally in Western Europe and North America, Christians are being harassed, tortured and murdered.  As reported by Reuters in January, 2012, some 100 million Christians were then being persecuted while a few years earlier the British Secret Service, M-16, put the number closer to 200 million.  German Chancellor Angela Merkel says that Christianity is “the most persecuted religion worldwide.” (A statement that elicited condemnation from many world leaders.) The Organization for Security and Cooperation on Europe estimates that a Christian is killed for his faith every five minutes.

What is the reason for such treachery?

By any measure, this persecution of Christians is one of the most dramatic stories of  our time, so why is it ignored ?

Raymond Ibrahim, fluent speaker of Arabic and a fellow of the Middle East Forum,  has written a timely and disturbing book that provides answers to these questions, sobering answers that explain both the sources of Islamic violence and the infirmities that plague the West.

As usual, history provides a large part of the answer to these questions.   For Islam from its beginnings, and in contrast to Christianity, promised its followers worldly success and prosperity.  From Mohammed’s first raids and down through the centuries of jihad conquests that followed, Islam has been a religion of victors vanquishing victims.     Though it’s rare to find someone who knows this, but contemporary Muslim lands in the Middle East and Africa include what were once great centers of  Christendom, like Jerusalem, Alexandria,  Damascus, Antioch, and Constantinople.  Imperialism is not a Western invention.

Islam, having conquered this vast territory, then went on to dominate it by imposing the cruelties of Sharia law and dhimmitude, both of which reduce all “infidels”, non-Muslims, to servile positions including the obligatory payment of a special tax called “jiizya”,

Ibrahim provides many examples of the brutal conditions under Muslim rule during these times where “according to one medieval historian, over a two period of a particularly ruthless Christian persecution campaign, some 30,000 churches were burned or pillaged in Egypt and Syria alone.”  In other periods under the Abbasid rule in 936 the Church of the Resurrection in Jerusalem, believed to be built atop the tomb of Christ, was burnt down.  A century later one Hakim bi-Amr Allah ordered what was left of the church to be destroyed, including its foundations dug up, as well as the destruction of the Golgotha and the church of Saint Constantine and all surrounding grave stones.  “They even tried to dig up graves and wipe out all traces” of the existence of these holy places.

Though apologists for Islam admit that  Hakim was a madman, they coyly offer him as an aberration, implying that Christians suffered primarily only under his rule.  Not so, writes Ibrahim for, “there is no dearth of Muslim leaders throughout the whole of Islamic history that have persecuted Christians and their churches.”

As children, many of us read stories of  medieval Europe in which “Mohammedans”, “Moors”, “Saracens” and “Turks” were fearsome antagonists.  Then when we got to high school and university, somehow that feature of European life played a less prominent role or was even absent from history courses.  It seems, though, that our earliest stories are accurate and Ibrahim relies on a broad set of facts to support this.

First of all, Islam, in merely the first decades of its existence, had conquered half the Christian lands in the world and it appeared to be on such a roll that it would soon squash Europe into a flat, single Islamic polity.  As Ibrahim writes, “In fact, Europe as we know it was forged in large measure by the Islamic conquests, which severed the Latin West from the Greek East, turning the once highly trafficked Mediterranean into a ‘Muslim Lake’ – so that , in the words of medieval Muslim historian Ibn Khaldun, ‘the Christians could no longer float a plank upon the sea.’ ”  Henri Pirenne, the Belgian historian, makes the same point when he writes, “The classic tradition was shattered because Islam had destroyed the ancient unity of the Mediterranean.” ( Mohammed and Charlemagne )

But in 1798 Napoleon invaded and handily conquered Egypt in the heart of the Muslim world.  This conquest was followed during the rest of the 19th century by other European powers who subjugated and colonized Moslem territories.

These invasions traumatized Islam; for prior to this, its centuries long winning streak served to intensify the triumphalism inherent in the religion.  Muslims’ loss of confidence declined further as they witnessed close up the power and dynamism of Western ideas and technology.  Ibrahim quotes late Osama bin Laden to the effect that, “When people see a strong horse and a weak horse, by nature, they will like the strong horse.”

And so it was throughout the nineteenth century that Muslims saw the West, synonymous for them with Christianity,  as the strong horse and both feared and admired it.  As Ibrahim writes with his characteristic directness, “The reason for this admiration is simple:  Islam, the quintessential religion of might makes right, teaches respect for power.”  Indeed, in the 20th century leaders like Mustafa Kemal Attaturk in Turkey, the Shah in Iran and  Gamal Nasser in Egypt, the latter wanting to unite all Arabs under what he called “The United Arab Republic,” attempted to emulate, at least in theory, Western ideas of nationalism, modernism and secularization.  During this time of Western confidence and hegemony which extended to about 1950, Christians were tolerated in Muslim countries, some even calling this a “Golden Age for Christians” among Muslims.

Of course, some Muslims remained loyal to their old ways, but by the early twentieth century Western scholars saw Islam as “a spent force, an ideology  on the wrong side of history.”   That people would think this is understandable.  After all, the much extolled ”secular city” had triumphed in the West so it became increasingly difficult to imagine that the appetites for consumer items and sexual freedom that it unleashed could be refused by anyone.

But then the West began pulling up stakes in the Islamic world and elsewhere while at the same time it adopted the religion of sentimentality as a replacement for Christianity.  Soon influential Westerners filled the air with mea culpas for their imperialism and other supposed sins.

What was not understood amidst this confessional pose adopted by the West, was that Islam sees imperialism as the normal use of power. So when the West began apologizing for what to them were normal actions, Muslims respect declined further while at the same time they grabbed these propaganda clubs handed to them and proceeded to bash the infidels in their own words.

This loss of respect spiraled downward into contempt when Islam saw “the new culture of sexual licentiousness moral relativism, godlessness, and even the Western self hatred that flooded Western societies in the late 1960s and 1970s, though they had roots going back decades earlier.”  Thus, Islamic supremacy and aggression, features of that old time religion from the seventh century, were revived.

Nothing embodies this revival more than the Iranian Revolution of 1979 when Islam reasserted itself under the fiery leadership of The Ayatollah Khomeini and various bearded and morose mullahs who inveighed against “the Great Satan”, the United States.   Their affirmations of Islam and loathing of America led to the overthrow of the Shaw and the take over of the United States embassy in Teheran, not only an act of war against America but a repudiation of centuries old international protocols.  “Islam is back,” these actions said loudly, though many people saw this as a mere episode, perhaps even the last gasp of an antiquated ideology rather than what it has shown itself to be, the harbinger of the last 35 years of terrorism.

Ignorant of all this, people see Muslims ravaging and killing as merely an extended bad hair day for them, a departure from their enlightened and peaceful past.   But the truth is the reverse:  the period of tolerance toward Christians in Muslim lands is an exception and the present attacks on Christians are the norm.

As an exemplar of this turnaround,  Ibrahim uses Sayyid Qutb, the 20th century’s most renowned Islamic scholar , author of a 30 volume commentary on the Koran, and a man who visited the United States in the 1940s.   Though Qutb had advocated that “Muslims should emulate Western science and  technology”,  visiting America radicalized him, for he detested the materialism, violence and open sexuality in the United States.  He insisted that Islam using Sharia law must first clean things up within Muslim countries which he thought were full of apostates and then next the world would have to be cleansed.

Not only did large segments in the universities, the intelligentsia and the media in the 1970s in America and Europe demonize the Western tradition, but these groups encouraged and financed “indigenous peoples” or, for that matter, anyone with a grudge against the West to beat a quick path back to “their ethnic identity.”   Thus the growth of “multiculturalism” and “diversity”, categories implicitly justified as patronizing charades which exploited people must have in compensation for centuries of mistreatment.

Unfortunately many of these ethnic traditions include varieties of tribalism, sometimes known as racism and anti-Semitism.  This should not be surprising either, since the source of identity politics and multiculturalism is German romanticism, a lethal ideology that venerates blood over civilization as we saw, or at least I thought we saw, in National Socialism under Hitler.   As a consequence of such “noble savagery” quackery,  Western intellectuals broadened the pathway for “once Westward-looking Muslims” to return to their roots.

So history then began to be taught as melodrama wherein the West is the villain and Islam is the noble victim.  Within these assigned roles, the objective history of the relationship between the West and Islam  gets reversed with the West becoming the greedy, violent Crusaders who invaded peaceful Muslim lands.

From such melodrama, as Ibrahim reports, we get Robert Fisk, correspondent for the respected British newspaper, The Independent, who follows this script of “spot the victim.”  Thus, he criticizes Christians for supporting status quo candidates like Ahmed Shafiq, the Murbarak candidate in Egypt, and for supporting Assad in Syria, not seeming to understand that the Christians are the victims and that jihadist alternatives to these regimes will kill Christians and burn their churches while imposing Sharia law.

Former president Bill Clinton misreads the situation in much the same way when he relies on a materialist explanation for, as he puts it, “what’s fueling all this stuff” which he says is “inequality and poverty.”  Thus, when the Nigerian government uses force against the Boko Haram jihadist gang for killing Christians, Mr. Clinton preaches that such “violence” will not solve the problem.

From these ignominious examples flows a pathetic irony: the Muslims presently persecuting Christians are themselves descendents of Christians who were persecuted by the same ideology and in the same terrible circumstances!

Ibrahim was born in America of Coptic Christian parents and has traveled widely in the Middle East; he has appeared before Congress and on national radio and television as well as having published in major newspapers and scholarly journals.  So his comprehensive description of the persecution and killing of Christians in Muslim lands is extensively documented in Crucified Again.   While the book may not always provide comfort, reading it is necessary for an understanding of the dynamic that propels the Islamic threat.