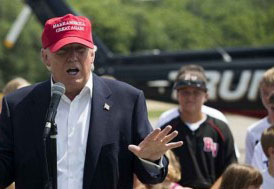 Donald Trump’s success has been the most perplexing phenomenon of this election cycle. Why on earth has this New York vulgarian resonated with a full third of Republican voters? Trump’s appeal taps into a middle-class fear of American decline: crises from trade and immigration to debt and foreign policy are pulling down a once great America to the mediocre status of other flailing countries. Yet while Trump has proved Machiavellian in tapping into popular furor, his policy proposals are typically vague and at times preposterous.

Take his signature talking point: “Build a wall and make Mexico pay for it.” Americans certainly want the southern border with Mexico sealed off to illegal immigrants. Most also support finishing the fence and beefing up security around its more porous sections. But Trump so far has offered no details about how Mexico would hand over $4 to $8 billion for the wall’s completion—other than promising to leverage Mexico with counterproductive threats of trade retaliation and harping on “the Great Wall of China.” Why cite the example of third-century B.C. China, when a number of sophisticated contemporary countries in Europe and the Middle East have built border fences that have worked well in turning away illegal immigrants and improving security? Could it be that Trump is unaware of these relevant examples—and has no real desire to invest the time to learn from the experience of others?

Latin Americans and Mexican citizens currently send home in aggregate about $70 to $80 billion per year in remittances. It would be both lawful and feasible to require all foreign nationals who do not have proof of legal residency in the United States to pay a 10 percent surcharge on any money sent outside of the United States. That fee alone might eventually earn sufficient funds to pay for the wall—and it would pass on the costs to those whose illegality prompted the need for its construction in the first place.

Trump also could ask Mexico to stop encouraging its own citizens to ignore U.S. immigration statutes. Mexico winks and nods at illegal immigration because it is a generous foreign-exchange earner and offers a safety valve for domestic social tensions. Proof of the government’s complicity in illegal immigration was its 2005 publication of a cartoon graphic handbook, “Guide for the Mexican Migrant.” The pamphlet offered advice about how to cross illegally into the United States, suggesting that Mexico does not care if its citizens break the laws of its neighbor—and that the Mexican government assumes that its own emigrants cannot easily read either Spanish or English, which is why they are in need of pictorial assistance.

In addition, Mexico, through its American consulates, is planning workshops in the United States to teach its expatriates about the naturalization process, in hopes of influencing the 2016 presidential election through a rush of new voters in swing states—just the sort of rank interference in the internal politics of a foreign nation that its own constitution does not countenance.

Trump could have expanded his critique of illegal immigration to describe how immigrants have not assimilated or integrated into American life, given that our culture has lost confidence in the time-tested melting pot, and immigrants arrive without language facility, legality, education, or capital. He might have further suggested that sanctuary cities promote an illiberal, neo-Confederate precedent of local government nullifying federal law. The Left would go ballistic, for example, if Cody, Wyoming, suspended federal statutes about firearm registration, or Salt Lake City, Utah, rendered null the Endangered Species Act within its city limits.

The issue of immigration fairness and meritocracy is usually ignored amid smears of nativism and xenophobia. Yet current immigration non-enforcement, in chauvinistic fashion, favors those who arrive illegally from Latin America and Mexico at the expense of those who wait patiently and legally from Africa, Asia, and Europe. Trump raised an issue that for too long has been ignored, but characteristically muddied the waters with bombast and silly solutions.

Trump’s veiled suggestion that the United States might leave NATO touches on another sore point too often ignored, but in a way and at a time that is counter-productive. He has said, “We are paying disproportionately. It’s too much, and frankly it’s a different world than it was when we originally conceived of the idea.” Most NATO members choose to ignore its requirement of a 2 percent national investment in defense, in expectation of piggybacking on the military heft of the United States. The current 28-member alliance has grown too rapidly in the post-Cold War era, and too far beyond the traditional European sphere. After the Ukraine crisis, it is almost impossible to envision the membership collectively coming to the defense of any tiny disarmed state perched on the volatile Russian border.

NATO’s Article IV—requiring consultation of the entire alliance over supposed threats to a member state—was never invoked once during the Cold War, despite Soviet global bullying. However, the clause has been invoked five times in the twenty-first century—and four times alone by a crying-wolf Muslim Turkey, the most anti-democratic of the NATO members that is now often at odds with many of America’s allies. The idea, for example, that the United States would go to war on behalf of NATO member Turkey if it picked a preemptive fight with Israel, its current de facto enemy, is absurd.

In sum, NATO’s finances need to be recalibrated. Its membership deserves reexamination. European members must step up and pay their fair share. All NATO deployments beyond the European continent, such as the recent optional no-fly zone mission over Libya, should be reassessed. Once more, let’s give credit to Trump for raising a legitimate issue, but lament that he did so in a clumsy fashion and at the wrong time. Europe, after all, is under jihadist assault, facing fiscal implosion, and witnessing the near legal dissolution of its Union.

Trump has been most criticized for his blunderbuss suggestion of suspending immigration of Middle Eastern Muslims into the United States, in the wake of jihadist terrorism in San Bernadino, Paris, and Brussels. Again, he has raised an important issue, given the disastrous laxity shown by Angela Merkel’s Germany, the insane border policies of the European Union, and the inability of Europeans to authenticate, integrate, and assimilate Middle Eastern Muslim immigrants into their societies—especially the enormous numbers of young males arriving from war-zones in Iraq, Libya, and Syria.

Trump, however, did not need to discriminate on the basis of religion. Instead, he simply could have generically targeted war-torn countries, whose instability, violence, and lax record-keeping make a good case for periodically suspending all their citizens’ privileges to emigrate to the United States—such as wild-west “nations” like Iraq, Libya, Syria, and Yemen.

Trump has a habit of turning his invective not just against countries, but against people as well. Here, too, the same rule applies: He correctly spots a real problem, but only makes the issue worse. Hillary Clinton, for example, recently has suggested that Trump was a sexist for a series of his chauvinistic and crude quips. Trump fired back on the topic of Bill Clinton’s callous womanizing. Clinton then quietly dropped the issue.

In fact, under the expansive definition of sexual assault promulgated by the left on college campuses, Bill Clinton would be expelled from school. His behavior—in the cases of Juanita Broaddrick, Gennifer Flowers, Paula Jones, Monica Lewinsky, and Kathleen Willey—arguably falls under the rubric of sexual harassment, as defined on campuses today, and has led indirectly to impeachment, out-of-court cash settlements, and court-ordered disbarment. Hillary Clinton’s empowerment of his sexism is also a legitimate political issue, given that she has emphasized that female accusers in general must be prima facie believed in their accusations of sexual assault. Yet as First Lady, Hillary Clinton helped to silence female accusers, deprecating their characters as a way of discrediting their accusations. Trump could have apologized for his own crude sexist behavior, and then more effectively pointed out why both Clintons have shown a habitual disregard for women. Of course, he did neither.

Trump dismissed a rude and interrupting Univision anchorman Jorge Ramos from a recent press conference. But he did so in a brash and equally rude style that missed another opportunity. Ramos is not a disinterested reporter, but an immigration activist masquerading as a journalist. He favors open borders as part of his progressive political agenda, lobbies against enforcement of immigration statutes, and has praised his daughter’s current work in the Hillary Clinton campaign. Ramos is certainly a self-interested careerist. Univision’s profits depend on a permanent audience of millions of Spanish-only U.S. viewers—an audience that would not exist if the United States had controlled borders.

Trump could have pointed out that border enforcement, as well as legal, measured, and meritocratic immigration would soon make Univision—and Ramos’s lucrative bilingual activist journalism—as relevant as Italian- or German-language news programs. Of course, such newscasts are not needed because millions of Italian and German immigrants assimilated once mass immigration from their homelands ceased.

Trump is not a populist, but a half-populist. He shows an uncanny knack for tapping public discontent over elite hypocrisies, but a characteristic inability to offer viable solutions.