America can still avoid sharing Europe’s fate. But only if we take action. 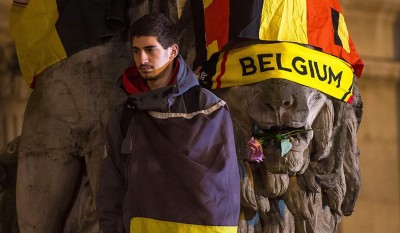 Because of what Europe has become, it now has few viable choices in dealing with radical Islamic terrorism. Its dilemma is a warning to Americans that we should turn away from a similar path of national suicide.

After suffering serial terrorist attacks from foreign nationals and immigrants, a normal nation-state would be expected to make extraordinary efforts to close its borders and redefine its foreign policy in order to protect its national interests. But a France or a Belgium is not quite a sovereign nation any more, and thus does not have complete control over its national destiny or foreign relations.

As part of the European Union, France and Belgium have, for all practical purposes, placed their own security in the hands of an obdurate Angela Merkel’s Germany, which is hellbent on allowing without audit millions of disenchanted young Middle Eastern males into its territory, with subsequent rights of passage into any other member of the European Union that they wish. The 21st-century “German problem” is apparently not that of an economic powerhouse and military brute warring on its neighbors, but that of an economic powerhouse that uses its wealth and arrogant sense of social superiority to bully its neighbors into accepting its bankrupt immigration policies and green ideology.

The immigration policies of France and Belgium are unfortunately also de facto those of Greece. And a petulant and poor Greece, licking its wounds over its European Union brawl with northern-European banks, either cannot or will not control entrance into its territory — Europe’s window on the Middle East. No European country can take the security measures necessary for its own national needs, without either violating or ignoring EU mandates. That the latest terrorist murders struck near the very heart of the EU in Brussels is emblematic of the Union’s dilemma.

As far as America is concerned, a fossilized EU should remind us of our original and vanishing system of federalism, in which states were once given some constitutional room to craft laws and protocols to reflect regional needs — and to ensure regional and democratic input with checks and balances on statism through their representatives in Congress. Yet the ever-growing federal government — with its increasingly anti-democratic, politically correct, and mostly unaccountable bureaucracies — threatens to do to Americans exactly what the EU has done to Europeans. We already see how the capricious erosion of federal immigration law has brought chaos to the borderlands of the American Southwest. It is a scary thing for a federal power arbitrarily to render its own inviolable laws null and void — and then watch the concrete consequences of such lawlessness fall on others, who have been deprived of recourse to constitutional protections of their own existential interests.

Europe’s immigration policy is a disaster — and for reasons that transcend the idiocy of allowing the free influx of young male Muslims from a premodern, war-torn Middle East into a postmodern, pacifist, and post-Christian Europe. Europe has not been a continent of immigrants since the Middle Ages. It lacks the ingredients necessary to assimilate, integrate, and intermarry large numbers of newcomers each year: There is no dynamic and fluid economy, no confidence in its own values, no belief that class and race are incidental, not essential, to one’s persona, no courage to assume that an immigrant made a choice to leave a worse place for a better one. And all this is in the context of a class-bound hierarchy masked and excused by boutique leftism.

Naturally, then, Europeans are unable to understand why a young Libyan came to Europe in the first place, and why apparently under no circumstances does he wish to return home. Specifically, Europeans — for a variety of 20th-century historical and cultural reasons — often are either ignorant of who they are or terrified about expressing their identities in any concrete and positive fashion. The result is that Europe cannot impose on a would-be newcomer any notion that consensual government is superior to the anarchy and theocracy of the Middle East, that having individual rights trumps being subjects of a dictator, that personal freedom is a better choice than statist tyranny, that protection of private property is a key to economic growth whereas law by fiat is not, and that independent judiciaries do not run like Sharia courts. It most certainly cannot ask of immigrants upon arrival that they either follow the laws of a society that originally made Europe attractive to them, or return home to live under a system that they apparently rejected. I omit for obvious reasons that few present-day Europeans believe that Christianity is much different from Islam, and apparently thus assume that terrorists might just as well be Christians.

Even worse is the European notion of medieval penance: Because one in the concrete present apparently wants little to do with a Moroccan second-generation ghetto dweller, he fabricates abstract leftist bromides to square the circle of hypocrisy and assuage his guilt — sort of like Hillary Clinton or Mark Zuckerberg calling for perennial open borders to justify their Wall Street–funded luxury and tony apartheid existence.

In Europe, immigrants are political tools of the Left. The rapid influx of vast numbers of unassimilated, uneducated, poor, and often illegal newcomers may violate every rule of successful immigration policy. Yet the onrush does serve the purposes of the statist, who demagogues for an instantaneous equality of result. Bloc voters, constituents of bigger government, needy recipients of state largesse, and perennial whiners about inequality are all fodder for European multicultural leftists, who always seek arguments for more of themselves.

So unassimilated poor immigrants from the former Third World become easy proof that inequality and unfairness are still here and must be addressed with someone else’s money — as if France has failed because it did not make an immigrant born in Algeria a good French socialist restaurant owner in 20 years.

The same phenomenon is with us in the United States. Without open borders, the Democrats would have had to explain to Americans how and why more taxes, larger government, more subsidies, less personal freedom, racial separatism, ethnic chauvinism, and a smaller military make them more prosperous and secure. Yet importing the poor and the uneducated expands the Democratic constituency. The Democrats logically fear measured, meritocratic, and racially and religiously blind legal immigration of those who want to come to America to seek freedom from statism. If a poor Oaxacan, who crossed into the U.S. three years ago — without education, legality, or knowledge of English — does not have a good car, adequate living space, and federalized health care, then the Koch brothers, Wall Street, Fox News, or the Chamber of Commerce — fill in the blank — is to blame, and legions of progressives are available to be hired out to redress such social injustice.

The Western therapeutic mindset, which maintains that impoverished immigrants should instantly have what their hosts have always had, trumps the tragic view: that it is risky, dangerous, and sometimes unwise to leave one’s home for a completely alien world, in which sacrifice and self-reliance alone can make the gamble worthwhile — usually for a second generation not yet born.

Demography is Europe’s bane. One engine of unchecked immigration has been the need for more bodies to do the sorts of tasks that Europeans feel are no longer becoming of Europeans. Demographic implosion is an old and trite observation; but more curious is the reason why Europe is shrinking — the classic and primary symptom of a civilization in rapid decline.

Europeans are not having children for lots of reasons. A static and fossilized economy without much growth gives little hope to a 20-something European that he or she can get a good job, buy a home, have three children, and provide for those offspring lives with unlimited choices. Instead, the young European bides his time, satisfying his appetites, as a perpetual adolescent who lives in his parents’ flat, seeks to milk the system, and waits for someone to die at the tribal government bureau. After a lost decade, one hopes to hook up with some like soul in her or his late thirties. The last eight years in the U.S. have seen an acceleration of the Europeanization of America’s youth.

Socialism also insidiously takes responsibility away from the individual and transfers it to the anonymous, but well-funded, state. The ancient Greek idea that one changes one’s children’s diapers so that one day they can change his is considered Neanderthal or just crudely utilitarian. Why seek children and the honor of raising and protecting them when the state can provide all without the bother and direct expense? Why have a family or invest for the future, when the state promises a pleasant and politically correct old-age home?

Without a Second Amendment or much of a defense budget, Europeans not only divert capital to enervating social programs, but also have sacrificed any confidence in muscular self-protection, individual or collective.

Even postmodern nations remain collections of individuals. A state that will not or cannot protect its own interests is simply a reflection of millions of dead souls that do not believe in risking anything to ensure that they are safe — including their own persons and those of their family. Finally, Europe is Petronius’s Croton. It does not believe in any transcendence as reified by children or religion. If there is nothing but the here and now, then why invest one’s energy in children who live on after one dies? Like atheism, childlessness reflects the assumption that ego-driven rationalism and satisfaction of the appetites are all there is and all that there ever will be.

Europe’s perfect storm is upon us. A shrinking, statist, and agnostic society that does not believe in transcendence, either familial or religious, is now in a war with near neighbors of a very different sort. In the Middle East, the fundamentalists are growing in numbers, and they most certainly do believe that their own lives are nothing in comparison to the Phoenix-like resurrection of their Caliphate and the sensual pleasures in the hereafter that will reward their martial sacrifices in the here and now. Of all the many reasons why immigrants to Europe so often dislike their generous hosts, the simplest may be because they so easily can.

Even H. G. Wells could not dream up any better harvest of Eloi by Morlocks, and it would take another St. Jerome (“All were born in captivity and siege, and do not desire the liberty they never knew. Who could believe this?”) to chronicle the Western tragedy.

As a general rule, whatever Europe is now doing, we should do the opposite — for our very survival in an increasingly scary world.