Are the recent raves about a new California renaissance true? 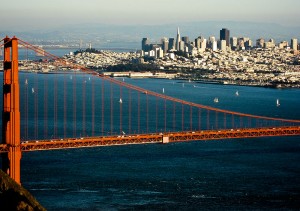 Rolling Stone magazine just gushed that California governor Jerry Brown has brought the state back from the brink of “double-digit unemployment, a $26 billion deficit and an accumulated ‘wall of debt’ topping $35 billion.”

The unemployment rate just went back up in July to 8.7 percent. That is significantly higher than the current national average of 7.3 percent. Such a high rate of joblessness is a bad omen when the Democrat-controlled state legislature is pushing for the mandatory minimum wage to reach $9.25 in a little over two years.

The “wall of debt” is not $35 billion. According to the State Budget Crisis Task Force report that was issued in January, California’s debt ranges from a minimum of $167 billion to a staggering $335 billion.

To close the budget deficit, Brown cut expenses, but he also just raised already-high income, sales, and gas taxes to the nation’s top levels. We won’t know the full effect of those costs on either businesses or the ongoing exodus of the more affluent for months to come.

Yet why was California ever in a fiscal crisis at all?

World food prices are soaring. California has the best soils, weather, and farmers in the world. Silicon Valley hosts Apple, Google, Intel, and Facebook. The state hosts some of the nation’s largest corporations such as Wells Fargo, Chevron, Hewlett-Packard, and Safeway.

The movie industry in Hollywood, tourism from Disneyland to Yosemite, the Napa wine industry, and vast deposits of gas and oil should make California more prosperous than Switzerland. Its top five universities — Caltech, Stanford, UC Berkeley, UCLA, and USC — usually rate among the top 20 worldwide.

Yet despite what God and man have given the state, California has often squandered its inheritance. For all its costly investments in wind and solar power, California’s electricity rates are the steepest in the nation.

The tab falls most heavily not on the green elites of the affluent coastal communities, but on the poor and middle classes concentrated in the hotter and colder interior. For many in Fresno or Bakersfield, keeping the air-conditioning on when August temperatures hit 100 is a fantasy from a bygone age.

Californians pay among the highest gas prices in the country. Again, those astronomical costs seem surreal, given that the state sits atop huge untapped deposits of gas and oil.

The California paradox of having among the highest taxes and among the worst services is also echoed in state-by-state rankings of public-school test scores. California continues to place near the bottom.

In the last 20 years, 3.4 million middle- and upper-middle-class Californians have fled paradise for low- or no-tax states. In contrast, the state currently has the largest influx of residents who immigrated illegally. Although exact numbers are impossible to obtain, estimates suggest that about 3 million Latin American nationals are residing in California. Many are hardworking immigrants, but most arrive illegally, don’t speak English, and don’t have money or a high-school education.

Ensuring foreign nationals minimum parity with U.S. citizens requires huge state inputs in education, law enforcement, and health services. The 2012 census listed California as having the highest poverty level (23.5 percent) of any state in the union. A state with roughly 12 percent of the U.S. population is now home to 33 percent of the nation’s welfare recipients.

What, then, is the state’s strategy for recovery? More taxes, regulations, and government.

Apparently, officials in Sacramento assume that the state’s rich inheritance, coastal culture, and natural beauty and climate will ensure that most Californians stay put, keep innovating, and pony up far more in sales, income, and gas taxes.

The exorbitant cost of living will simply be the shakedown price of being a resident of hip Newport Beach or Palo Alto — places believed to be safe, if not immune, from the turmoil growing elsewhere in the state.

So will California recover its past glory — or go the way of Detroit?

It may do both.

Coastal greens, progressive Bay Area gays, liberal urban elites, and hip dot-com workers will probably not soon flee the temperate, scenic corridor from Berkeley to San Diego. For at least a while longer, they will be wealthy and confident enough to afford the living costs that high taxes and myriads of regulations ensure.

Yet for the strapped middle classes in the interior of the Los Angeles basin and the Central Valley, there is a perfect storm raging. They can ill afford the soaring taxes, high unemployment, costly illegal immigration, escalating crime rates, substandard roads, record power and gas prices, underwater home values, and dismal schools.

In short, the California coastal corridor still resembles Germany, while much of the interior is becoming Greece.

Victor Davis Hanson is a classicist and historian at the Hoover Institution, Stanford University. His new book, The Savior Generals is just out from Bloomsbury Books. You can reach him by e-mailing author@victorhanson.com. © 2013 Tribune Media Services, Inc.