Today launches the Freedom Academy®, a project some 18 months in the making. In the 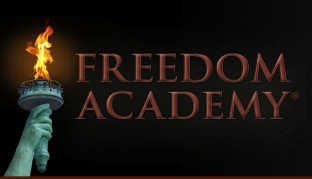 present age, we need a meeting place where people can rediscover what freedom entails and appreciate the origins and role of liberty. The majority of Americans yearn for a rebirth of these values that have sustained Western civilization, and birthed the American experiment. Such reverence for our heritage and origins is why we at PJ Media will offer a variety of ways to understand our present dilemmas through an appreciation of past ideas and events.

Despite all the contemporary upheavals in Washington—whether over the government shutdown, debt-ceiling increase, or Obamacare—we can be certain that history remains both our gateway to the future and our window to the past. The political strife we are witnessing is not new, but a continuance of the age-old struggle between the tragic and therapeutic views of the human condition, over the collision of history and humanities with the social sciences, and the liberty of the individual pitted against the coercive power of the collective.

We cannot fully understand and appreciate the magnitude of our current challenges if we do not study the world around us through learning from past events and the contributions of earlier minds—both the ordeals and triumphs of people of action, and the thoughts and ideas of others who tried to make sense of such events through literature and philosophy.

The Academy is the online home for the intellectually curious. They can draw on a book club that encourages reading and discussion of the principles of freedom and liberty, e-books, discussion guides, and a video lecture series that bring to life the ideas, people and states that shaped Western civilization.

Anyone can read, listen, or watch the current news. Yet if you want to place the present noise in a larger context of understanding modern civilization, then the Freedom Academy Lecture Series and its Book Club can aid your odyssey of intellectual and political discovery. While we have created the content of the Academy especially for those who love freedom and liberty—and are worried over the present endangerment of both—we were also mindful to make our offerings appealing to all generations through videos, written texts, and web formats.

Beginning with the first lecture series, the Odyssey of Western Civilization, I will guide viewers on a 2,500-year journey across the landscape of Western civilization, from its origins in the Greek city-states to its most affluent and free expression in modern America. The second series, The Western Story, explores the many connections between the classical Greek and Roman worlds and the present era, and how our contemporary experiences are explicable through the knowledge of our classical culture and civilization. My final series, History in the News, also correlates the present with the present by showing how present controversies are best understood through drawing on historical precedents.

The Freedom Academy also features a fourth video lecture series created and narrated by Scott Ott. Called Freedom’s Charter, this 20-episode video series takes you behind the scenes of the creation of the U.S. Constitution.

Comprised of four-lecture series, the Freedom Academy’s online video lectures and companion e-books can be purchasedon its website http://freedomacademy.com. The Freedom Academy Book Club is free and a veritable intersection where those who cherish freedom and liberty can explore books that can shape our common destiny.

President Abraham Lincoln once said, “Fellow citizens, we cannot escape history…[we] will be remembered in spite of ourselves.” I fully agree with Lincoln and I so also believe “we know how to save the Union.” If we do not educate ourselves on our past—and the past of other nations—then we fail. The choice is ours to make, or break, the “last best hope of earth.”

Click on the image above to view Victor Davis Hanson's Interview with Megyn Kelly on CSPAN Book TV.

Get VDH's "Week In Review"