What does it take to warn Americans about unchecked pension growth, socialized medicine, vast increases in 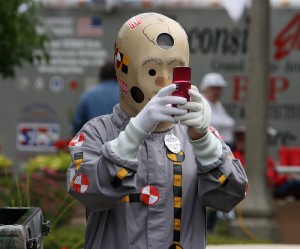 entitlements, higher taxes, and steady expansion of government? In other words, what is it about Detroit, Italy, or Greece that we do not understand?

In the last five years, the Obama administration has raised taxes on the top income rates, implemented Obamacare, added millions to the disability and food stamp roles, grown the size of the federal work force, run up the national debt, and vastly expanded the money supply, along with insuring near zero interest rates. Are there any historical examples where these redistributive efforts have brought long-term tranquility and prosperity?

To put it another way, does anyone ask basic questions about human nature anymore? If one gives more incentives to obtain government support while unemployed, why would not fewer people be working? If the food stamp, unemployment, and disability rolls are markedly up, and if it is almost impossible to verify that recipients are also not working for unreported cash wages (we hear mostly of government efforts to add more to these programs, rather than to audit those already on them), why would one seek a “regular” job that would lose such subsidies and make all one’s income reportable? (We know two basic truths about the IRS in the age of Obama: first, it goes after political opponents in partisan fashion, and second, it gives away billions of dollars in federal income tax rebate credits to those who did not deserve them.)

If you allow illegal immigrants to enjoy full government subsidies, driver’s licenses, in-state tuition discounts, sanctuary cities, participation on juries, and all without fear of deportation, then why (a) would people not flock here illegally from Mexico, and (b) why after arriving would they go through the hassle of seeking citizenship when residency provides almost all the same benefits?

If Obamacare is structured to ensure health insurance in extremis without paying a premium upfront, why would anyone buy it — as opposed to simply purchasing it only after an illness or operation, and paying a small fine? (Do life insurance companies allow us to purchase $1 million policies after open heart surgery, and if not, why not?) And if young people often choose to play the very good odds that they won’t get sick, or at least not terribly sick, and therefore do not need health insurance until after their ordeal, how could a plan be predicated on luring millions of young people (a poorer cohort than either the middle-aged or elderly) to buy something they would not often need in order to pay for others who would pay less for something they would constantly need?

The problem with socialism (cf. Detroit to Athens) is not just that it destroys individual initiative and creates a dispirited and montonous sameness to everything, but that its architects usually find exemption from the ramifications of their own ideology and thereby are more emboldened to implement it.

Unions, pet businesses, and D.C. insiders will all receive waivers or subsidies to excuse them from the full wrath of Obamacare — and, therefore, they foist it on others. The Wall Street Journal’s credo of “comprehensive immigration reform” is predicated on the assumption that none of the opinion writers live either along the border or in areas that have experienced huge influxes of illegal immigrants (e.g., their children are not in the public schools of a Tulare or central Los Angeles. They do not try to ranch in southern Arizona; they do not drive in rural Tulare County. And they are not lower middle-class residents of California trying to pay steep taxes for very little in return).

How did it happen that the United States chose to follow the path of socialism at precisely the time that it was imploding the world over?

Is there still a notion of scandal? If EPA director Lisa Jackson’s fake email con and the Pigford payouts were small beer, what were the scandals about Benghazi, the IRS, the AP, and the NSA?

Does anyone care that every presidential pronouncement about the Affordable Care Act was false? We have reached a new point where either the media is an appendage of government, or the public is too weary to care about the conduct of its government — to the degree that this administration could do pretty much anything.

If running up $6 trillion in debt and disrupting one-sixth of the U.S. economy with Obamacare are passé, what would not be? Tapping a German chancellor’s phone? Turning the entire Persian Gulf into an anti-American enclave? Reducing the president’s word abroad into the stuff of jest? Arbitrarily deciding not to enforce “settled law”?

Can anyone recall in our recent memories a period in which the Federal Reserve essentially ended real interest rates (almost non-existent interest that does not match the rate of low inflation)? We understand the logic behind quantitative easing, given that only with about 2% interest on federal obligations can the government service the huge $17 trillion debt (our service costs on the debt are actually less than during the 1990s in inflation-adjusted dollars when the debt was a third of the present amount). Is the theory that the deserving poor who are debtors should pay their undeserving rich creditors very little?

But how does that work out in fact? Debtors are paying high interest, from 7-8% on many student loans to 15-20% on credit cards — especially those who cannot take advantage of cheaper mortgage loans. Yet why save, when passbook accounts pay about 1% or less? Are you to turn to the stock market with your $1,000 and risk another 2008? Or dabble in real estate and ditto the same?

Would it be better to have worked 30 years at the DMV and be receiving a California state pension, or to have owned a small business and scrimped to have put away $3 million in savings? In terms of monthly income, perhaps the state pension is preferable.

In our “sue anyone” America, we are told that companies are responsible, even indirectly, for the unintended but pernicious effects of their products. We not only sue tobacco companies for the bad lungs of the smoker, who on his own free will plays poker with cancer, but also the fast food outlet whose coffee when spilled burns inattentive buyers. By that litigious standard, why are there no suits against Apple for its iPhone — an insidious device far more addictive than opiates, an impairment to driving far more deleterious than two martinis, and at a monthly cost as disruptive to household finances as habitual visits to the casino?

In the last week, on five occasions I have dodged two swerving semi-trucks on State #99, a motorist who made a rolling stop into a pedestrian walkway and almost hit my bicycle, and two drivers going no more than 40 mph in the fast left freeway lane. The common denominator? They were all texting on their phones. According to liberal legal minds, isn’t Silicon Valley guilty of hawking one of the most dangerous consumer items of the last fifty years?

How did Barack Obama become the most anti-civil liberties president in history — to almost complete silence? Well aside from the fact that Obama embraced, or more often expanded, all the Bush-Cheney anti-terrorism protocols (e.g., preventative detention, Guantanamo, renditions, the Patriot Act, etc.), he has droned ten times more suspects than did Bush.

Do we remember Obama’s own reference to Bush’s occasional use of bombing and predators in Afghanistan, when he called for more ground troops so that the U.S. had “enough troops that we’re not just air raiding villages and killing civilians which is causing enormous problems there”?

When was the last time a president got caught tapping the private phones of French elites, a German chancellor, or a Brazilian head of state? When has an Associated Press reporter found his communications monitored? Has any president since Richard Nixon been accused of politicizing the IRS to go after supposedly partisan enemies? What might have been the media response had George Bush monitored the communications of our key allies? Never in recent U.S. history has a president so impaired the concept of civil liberties — and to the complete silence of the media that proclaims itself the very champion of the First Amendment.

In sum, we have become so inured to recent distortions in reality, that we assume aberration is the new normal — or we are too busy texting to care.