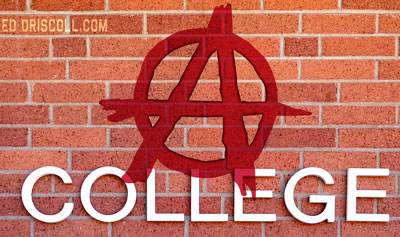 Campuses are becoming the haunts of the very wealthy and the poor, with little regard for any in-between — sort of like California.

Let me explain. Lately lots of strange things have been in the news about college campuses — from the Rolling Stone’s mythography [1] of the University of Virginia fraternities to Lena Dunham’s invented charges [2] of rape against a supposed Oberlin College Republican to courses on “white privilege” to “hands up; don’t shoot” demonstrations protesting the police shooting of Michael Brown.

But there are lots of campus topics that garner little publicity. Take tuition costs. Aggregate student debt is reaching $1 trillion [3] — a result of an insidious relationship between federally guaranteed loans (many of which cost over 5% annually to service) and tuition spikes that habitually exceed the rate of inflation.

As a result, in a logical universe, there would be widespread student protests against the lack of transparency in university budgeting. There would anger at paying Hillary Clinton nearly a third of a million dollars [4] for a boilerplate 30-minute chat. There would be grassroots complaints about the costly epidemic of new administrative positions and federal mandates that have nothing to do with in-class instruction. There would be inquiries about why teaching loads have declined as tuition skyrocketed.

Instead, there is mostly silence on campus. Why? Perhaps the answer reflects the fact that the campus bookends the trajectory of California — in that elite and wealthy students do not really care that much whether their combined tuition, room, and board tab goes from $55,000 a year to $60,000, given their parents’ ample resources. At the other end, poorer and often minority students are more likely to have access to college grants and scholarships. The working classes in between, who often lack familial capital and are not designated as disadvantaged in ethnic or class terms, more often pay the full bill. Do universities count on such dichotomies — that the most influential in terms of race, class, and gender issues are the most likely not to have to pay themselves the spiraling tab?

Another dead issue is the presence of winners and losers on campus. The universities are divided into two classes: tenured and tenure-track professors versus part-time lecturers. At some public universities, the number of units taught by the part-time pool is exceeding 40% of all classes offered. The former grandees make three to five times more per class than the latter losers, and receive better benefits, life-time security, and far better working conditions (class selection and times, offices, release time, sabbaticals, etc.).

Yet on a per-class basis, there is often little difference in the quality of instruction. Many part-timers publish more than tenured full professors. Often the most progressive of my professorial colleagues, who were prone to complain about supposed Wal-Mart inequalities, were the least concerned about the exploitation of part-time faculty. Indeed to meet escalating faculty demands for more release time, research assistance, and race/class/gender services, ensuing additional costs were made up by the illiberal practice of hiring more part-time faculty.

There is a “I got mine, Jack” attitude among full professors, or maybe “après moi le déluge,” that reflects the fact that the traditional full professors hired in the 1960s and 1970s were historical anomalies, sort of like union featherbedders on the old cabooses.  Most won’t be replaced when they retire by similar tenure-track faculty. Most have no intention of giving up such lucrative perches at 65. And most understand that the present university’s fossilized, baron/serf system of tenure and part-timer is no longer sustainable. Perhaps such exploitation explains the hard-left politics embraced by so many senior faculty: in the manner of medieval penance, they can assuage their guilt at ignoring the exploitation in their faces by embracing abstract fights against inequality at a distance.

Another inexplicable fact is the failure to notice crime that laps up to campus. Forty years ago as a graduate student at Stanford, I lived for two years in East Palo Alto, along with other impoverished students. It was then the per-capita murder capital of America. I sometimes went to bed to the sound of semi-automatic gunfire. I was assaulted twice — once, when youths jumped out of a car and tried to steal my bike (with me on it), and again by a thief in line at 7-Eleven who threw a beer bottle at my head as he ran off with a six-pack. Once, a gang-banger tried to break down the front door of my apartment and was chased off with a baseball bat.

At that time, most Stanford students lived either on campus or in good neighborhoods in Palo Alto and Menlo Park. Few lived or went east of the 101 freeway. Crime off campus, in other words, for many was not the issue that supposed violence on campus against women was. Only recently have Stanford and other campuses issued red-alert bulletins about criminal suspects, with detailed descriptions of the sort not found in local newspapers.

The same was true while teaching at CSU Fresno. The surrounding neighborhoods south of Barstow Avenue were often scenes of assault, rape, and strong-armed robbery; but on campus the administration — until recently — seemed oblivious to the carnage. I remember foolishly asking one of the organizers of a “take back the night” rally on campus whether it was more dangerous for single women to party inside fraternities or to walk to them through the local neighborhoods. At the University of Virginia, the administration seemed to react far more to the made-up story in Rolling Stone about fraternities as hotbeds of violent rape than to the actual murder of UV coed Hannah Graham (and others as well?). The suspect Jesse Matthew may be linked to as many as 10 rapes [5], murders and disappearances. The latter story should have been of far more interest to feminists since it suggested that a serial violent misogynist and rapist had been on the loose in the campus vicinity for years. There should have been more protests demanding beefed-up campus security and awareness programs in the local community. But then again Matthew did not fit the easy-targeted stereotype of a pampered frat boy using women as a sort of birthright. It is not good publicity for universities to publish the crime statistics of the communities that surround them; as recompense, it is smarter to assure students and parents that they are watchdogs of fraternities that they can sanction, since they are not watchdogs of more violent convicted felons  in their vicinities that they apparently cannot.

There are other ignored campus outrages. One is the sky-high unemployment rate of recent graduates, and the complete failure of universities to care much about it. There should be a Marshall Plan on campuses to advise and help students in their second and third years about post-graduate employment. Financial counselors should warn students when their tuition debt reaches unsustainable levels.  One would think university counselors early on would mandate consultations with students on job preparation, faculty would mentor students about job opportunities, and in general the employment rates of recent graduates would be well-publicized. What sort of business hikes its charges while lowering the quality of its product? Answer: one that is subsidized by the government.

Another issue is the internship. An internship does not mean that you must work summers for nothing at a local pizza parlor to acquire a small-business sense. Instead, the more status that an employer enjoys, especially in journalism, politics, corporations, law firms, and lobbying groups, the more likely one will either receive nothing or very little for his labor. Students intern not so much to learn skills as to meet powerful people who one day might hire them. Expect to see on campuses occasional protests about raising the minimum wage — and almost nothing about the exploitation by the powerful who hire, but often do not pay, college students, by dangling the carrot of an eventual job somewhere in the future.

Again, there is a paradoxical class role here as well. The middle and lower classes cannot afford to intern at tony non-profits or big-time law firms, and are likely to work at Starbucks. The scions of the wealthy or those on summer subsidized grants can. They apparently do not mind their temporary indentured status — on the premise that one day soon they will be the proverbial (to quote Bruce Springsteen) “man at the top” and someone else will be the indentured wretch.

In some sense, these issues are already being addressed by the explosion of for-profit trade schools that blossom around college campuses and the growth of cut-rate on-line instruction. Notice the subtexts are two-fold: they  give you straight instruction without the race/class/gender/tenured/administrative overhead; and, two, because the latter package does not lead to greater communication skills, better writing, improved computation, or real knowledge, you are no worse off for not paying for it.

Traditional campuses are becoming like California, where those who got tired of paying high taxes and getting poor services with lots of psychological abuse simply left. Those who remained were mostly the very wealthy and the very poor.

[5] may be linked to as many as 10 rapes: http://www.nationalreview.com/campaign-spot/394545/violent-threat-near-uva-rolling-stone-downplayed-jim-geraghty

6 thoughts on “The Campus as California”