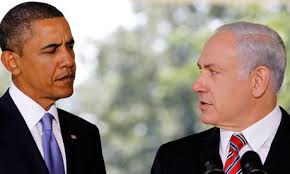 Israeli prime minister Benjamin Netanyahu spoke to Congress on Tuesday to warn Americans of the anti-Western threats from theocratic — and likely to soon be nuclear — Iran.

Netanyahu came to the U.S. to outline the Iranian plan to remake the Middle East with a new nuclear arsenal. His warning was delivered over the objections of the Obama administration, which wants to cut a deal with Iran that allows the theocracy to continue to enrich lots of uranium.

Netanyahu received a standing ovation for stating the obvious. Iran is currently the greatest global sponsor of terrorism. Tehran now has de facto control over four Middle East nations: Iraq, Lebanon, Syria, and Yemen. Iran has serially ignored all past U.S. deadlines to stop nuclear enrichment. It habitually misled U.N. inspectors. It threatens to spark a nuclear arms race in the Middle East.

At one point the Iranian economy was sputtering due to Western sanctions. Hundreds of thousands of reformers hit the streets of Tehran in 2009 to protest what they believed to be the fraudulent results of a presidential election. The theocracy was worried that its nuclear plans would either cause economic collapse due to the sanctions or prompt some sort of Western military response.

But all of that has changed due to the Obama administration’s zeal to conclude an agreement with Iran at any cost.

For the last six years, lots of American allies besides Israel have become scared of this strange new diffidence of the United States — as if the Obama administration feels that America’s prior prominence as leader and protector of the West was either unwarranted, too costly, or resulted in an unfair world order in need of adjustment.

President Obama entered office promising reset diplomacy with Russia. He declared an end to former president George W. Bush’s punitive measures against Russia — as if somehow the United States, not Russia, was responsible for the growing estrangement.

Russian president Vladimir Putin, however, interpreted the reset as American guilt. He assumed there would be few consequences to gobbling up the Crimea and eastern Ukraine in the same way that he had sliced off parts of Georgia. So far, he has been right. No wonder that he eyes the Baltic states next.

Controversy surrounds the creation and spread of the Islamic State in Syria and Iraq. But there is no disagreement about what followed Obama’s abrupt withdrawal of U.S. forces from Iraq, as he fulfilled a campaign promise.

At one time the administration bragged of Iraq as possibly its “greatest achievement,” and as being “stable” and “secure.” But the precipitous pullout led to anarchy and a fertile landscape in which the Islamic State could thrive. After 2011, it turned out that the absence of U.S. troops in Iraq, not their presence, had enabled the savage terrorists.

The same muddle characterized American policy in Syria. Syrian president Bashar Assad ignored Obama’s “red line” by using chemical weapons, but Obama imposed no consequences. Then, Secretary of State John Kerry was reduced to asking Putin to negotiate a face-saving compromise — as if somehow the U.S., not Syria, had overstepped.

In reaction to a series of terrorist crises — the shootings at Fort Hood, the bombings at the Boston Marathon, the killings in Ottawa and Sydney, and, most recently, the murder of journalists and Jewish citizens in Paris — the Obama administration has refused even to utter the phrase “radical Islam.”

Amid such moral confusion, who is the American enemy and who is the ally? Netanyahu has received more administration invective than has Iran — as if a Western democratic nation, not the specter of a nuclear Iran, was the source of growing tensions.

The common theme in all these examples is that somehow the United States (or its allies) is portrayed as being culpable for current problems — not the autocratic, theocratic thugs who invade their neighbors, threaten to obliterate democracies, and see terror as a legitimate tool of state policy.

The Obama administration’s paralysis is not just rhetorical. For the first time since 2001, defense spending will dip below 4 percent of GDP, as the Army, Navy, and Air Force shrink to near–record-low postwar levels.

The astronomical $18 trillion in national debt was not the only cause of military cutbacks. America’s enemies understood that even massive defense cuts — and tax hikes — still did not offset vast increases in social spending, resulting in annual deficits that still run over $500 billion.

The withdrawal from the world stage is associated not just with a massive borrowing and spending spree at home, but also with administration penance for supposed past self-righteousness and sins abroad — as Obama cites the gamut from the Crusades, the Inquisition, slavery, and Jim Crow to the more recent Afghanistan and Iraq wars, Guantanamo Bay, and the War on Terror.

Unfortunately, throughout history, leaders who have appeared weary and sounded apologetic have invited chaos. And chaos encourages war — all the more so when weakness appears so audacious.

19 thoughts on “The Audacity of Weakness”