The problem with negotiating with President Obama is not necessarily that he sometimes makes things up, but that he always sort of makes things up. Take a 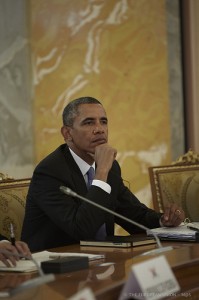 single recent October 8 press. All at once, the president used a weird assortment of similes and allusions to brand ad nauseam his opponents as little more than ransom takers, house burners, defaulters, global-economy crashers, nuclear-bomb users, extremists, threateners, extortionists, hostage takers, plant burners, and equipment breakers. He then bragged that domestic oil and gas production on his watch are at an all-time high—true, but he left out the salient fact that such gains are entirely the result of exploration on private lands, given that under his administration new federal oil and gas leases have by intention radically slowed. In 2010 actual oil and gas production on federal land hit historic lows. Ditto Obama’s brag that he lowered the deficit by half. If that claim turns out to be true, it is largely because of congressionally imposed sequestration cuts he opposed and record-low interest rates of scarcely over 2 percent that reflect a moribund recovery but have allowed us to triple the debt to $17 trillion, but to pay only about the same costs to service it as was true in 1997 when what was owed was two-thirds less but the interest rate three times higher. How long will interest rates stay at about 2 percent on federal obligations? Opponents of Obamacare were reduced to obstructionists, without mention that every one of the original presidential health-care promises—cheaper premiums, easy online access, no tax increases, unaltered existing health plans, increased job creation and business competitiveness, help for reducing the deficit, etc.—upon full enactment so far have turned out to be quite untrue.

The problem with such disingenuousness—calling for civility coupled with the above invective, bragging about radically lowering deficits without specifying why and how they occurred, and taking credit for radically more oil and gas production while being indifferent or opposed to it—is that, although it can be delivered in a cool, flippant mode, it is also now six years old, and few believe any more that what he asserts so breezily as fact is much more than half true. In contrast, had he stopped the name-calling, honestly explained why deficits have gone down somewhat (from record highs), praised the private energy sector and promised to give it more help on public lands, and admitted the problems with Obamacare—he would now be negotiating.