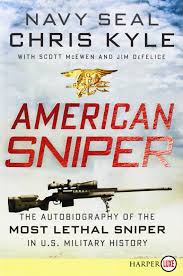 Were a confused Michael Moore and others faulting American Sniper on the argument that Chris Kyle was a sniper per se, or that he was an American sniper?

I don’t remember Michael Moore or any other Hollywood grandees objecting much to the 2001 war film Enemy at the Gates, which was supposedly loosely based on the controversial (and perhaps less than verifiable) career of the deadly sniper Vasily Zaitsev. That movie portrayed the expert Zaitsev as a hero in trying to cut down Wehrmacht officers and soldiers on behalf of the Soviet cause. It reminded audiences not just that Zaitsev’s sniping could save his fellow Russians, but that it was also a very dangerous business for the shooter: As the hunter, Zaitsev often very quickly became the hunted.

Nor did Moore et al. object to the positive portrayal of the sniper Private Daniel Jackson (Barry Pepper) in Saving Private Ryan. Jackson, from his hidden perches, kills lots of unsuspecting Germans with his telescopic sniper rifle, saving members of hero John Miller’s company—until he himself is blown up by German tank fire.

In Captain Phillips Navy SEAL snipers are portrayed as “marksmen” who nonetheless stealthily blow apart Somali pirates, and thereby save Phillips’s life. Hollywood and film critics were also quite enthusiastic about that movie, apparently including the final rescue of Phillips by skilled “snipers” (i.e., the targeted pirates never knew that they were being targeted and never knew what hit them).

What has more likely caused some controversy over American Sniper is not the sniper profession per se of Chris Kyle (since snipers were not de facto deemed suspect in prior films), but three other considerations:

a) American Sniper often portrays the Islamist insurgents as savage, and Kyle as complex, but nevertheless both patriotic and heroic in protecting other Americans from them;

b) the movie does not serve as a blanket damnation of the Iraq war, at least as is otherwise typical for the Hollywood Iraq film genre; in this regard, unlike many recent Hollywood film titles with the proper noun American in them (e.g., American Hustle, American Gangster, American Psycho, American History X, American Beauty, etc.), the film quite unusually does not dwell on American pathologies; and

c) perhaps most important, the film is very successful, and has resonated with the public at the precise time when other recent movies more welcomed by the establishment, such as Selma, have so far not.

26 thoughts on “Snipers, Correct and Incorrect”