Obama admirers have created a complete distortion of “the Eisenhower era.”

In critique of the George W. Bush administration, and in praise of the perceived foreign-policy restraint of Obama’s first five years in the White House, a persistent myth has arisen that 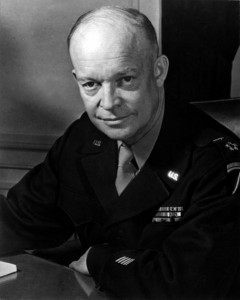 Obama is reminiscent of Eisenhower — in the sense of being a president who kept America out of other nations’ affairs and did not waste blood and treasure chasing imaginary enemies.

Doris Kearns Goodwin, Andrew Bacevich, Fareed Zakaria (“Why Barack Is like Ike”), and a host of others have made such romantic, but quite misleading, arguments about the good old days under the man they consider the last good Republican president.

Ike was no doubt a superb president. Yet while he could be sober and judicious in deploying American forces abroad, he was hardly the non-interventionist of our present fantasies, who is so frequently used and abused to score partisan political points.

There is a strange disconnect about Eisenhower’s supposed policy of restraint, especially in reference to the Middle East, and his liberal use of the CIA in covert operations. While romanticizing Ike, we often deplore the 1953 coup in Iran and the role of the CIA, but seem to forget that it was Ike who ordered the CIA intervention that helped to lead to the ouster of Mossadegh and to bring the Shah to absolute power. Ike thought that he saw threats to Western oil supplies, believed that Mossadegh was both unstable and a closet Communist, sensed the covert hand of the Soviet Union at work, was won over by the arguments of British oil politics, and therefore simply decided Mossadegh should go — and he did.

Ike likewise ordered the CIA-orchestrated removal of the leaders of Guatemala and the Congo. He bequeathed to JFK the plans for the Bay of Pigs invasion, which had been born on the former’s watch. His bare-faced lie that a U-2 spy plane had not been shot down in Russia did terrible damage to U.S. credibility at the time.

The Eisenhower administration formulated the domino theory, and Ike was quite logically the first U.S. president to insert American advisers into Southeast Asia, a move followed by a formal SEATO defense treaty to protect most of Southeast Asia from Communist aggression — one of the most interventionist commitments of the entire Cold War, which ended with over 58,000 Americans dead in Vietnam and helicopters fleeing from the rooftop of the U.S. embassy in Saigon.

Eisenhower’s “New Look” foreign policy of placing greater reliance on threats to use nuclear weapons, unleashing the CIA, and crafting new entangling alliances may have fulfilled its short-term aims of curbing the politically unpopular and costly use of conventional American troops overseas. Its long-term ramifications, however, became all too clear in the 1960s and 1970s. Mostly, Ike turned to reliance on nuke-rattling because of campaign promises to curb spending and balance the budget by cutting conventional defense forces — which earned him the furor of Generals Omar Bradley, Douglas MacArthur, and Matthew Ridgway.

In many ways, Eisenhower’s Mideast policy lapsed into incoherency, notably in the loud condemnation of the 1956 British-French operations in Suez (after Nasser had nationalized the Suez Canal), which otherwise might have weakened or toppled Nasser. This stance of Eisenhower’s (who was up for reelection) may have also contradicted prior tacit assurances to the British that the U.S. would in fact look the other way.

The unexpected American opposition eroded transatlantic relations for years as well as helped to topple the Eden government in Britain. Somehow all at once the U.S. found itself humiliating its two closest allies, empowering Nasser, and throwing its lot in with the Soviet Union and the oil blackmailers of Saudi Arabia — with ramifications for the ensuing decades.

Yet just two years later, Ike ordered 15,000 troops into Lebanon to prevent a coup and the establishment of an anti-Western government — precisely those anti-American forces that had been emboldened by the recent Suez victory of the pan-Arabist Nasser. We forget that Ike was nominated not just in opposition to the non-interventionist policies of Robert Taft, but also as an antidote to the purportedly milk-toast Truman administration, which had supposedly failed to confront global Communism and thereby “lost” much of Asia.

Eisenhower gave wonderful speeches about the need to curtail costly conventional forces and to avoid overseas commitments, but much of his defense strategy was predicated on a certain inflexible and dangerous reliance on nuclear brinksmanship. In 1952 he ran to the right of the departing Harry Truman on the Korean War, and unleashed Nixon to make the argument of Democratic neo-appeasement in failing to get China out of Korea. Yet when he assumed office, Eisenhower soon learned that hinting at the use of nuclear weapons did not change the deadlock near the 38th Parallel. Over 3,400 casualties (including perhaps over 800 dead) were incurred during the Eisenhower administration’s first six months. Yet the July 1953 ceasefire ended the war with roughly the same battlefield positions as when Ike entered office. Pork Chop Hill — long before John Kerry’s baleful notion about the last man to die in Vietnam — became emblematic of a futile battle on the eve of a negotiated stalemate.

Ike’s occasional opportunism certainly turned off more gifted field generals like Matthew Ridgway, who found it ironic that candidate Ike had cited a lack of American resolve to finish the Korean War with an American victory, only to institutionalize Ridgway’s much-criticized but understandable restraint after his near-miraculous restoration of South Korea. In addition, Ridgway deplored the dangerous false economy of believing that postwar conventional forces could be pruned while the U.S. could rely instead on threatening the use of nuclear weapons. He almost alone foresaw rightly that an emerging concept of mutually assured destruction would make the conventional Army and Marines as essential as ever.

As a footnote, Eisenhower helped to marginalize the career of Ridgway, the most gifted U.S. battlefield commander of his era. Ike bore grudges and was petty enough to write, quite untruthfully, that General James Van Fleet, not Ridgway, had recaptured Seoul — even though the former had not even yet arrived in the Korean theater. That unnecessary snub was reminiscent of another to his former patron George Marshall during the campaign of 1952. Ridgway, remember, would later talk Eisenhower out of putting more advisers into Vietnam.

The problem with the Obama administration is not that it does or does not intervene, given the differing contours of each crisis, but rather that it persists in giving loud sermons that bear no relationship to the actions that do or do not follow: red lines in Syria followed by Hamlet-like deliberations and acceptance of Putin’s bogus WMD removal plan; flip-flop-flip in Egypt; in Libya, lead from behind followed by Benghazi and chaos; deadlines and sanctions to no deadlines and no sanctions with Iran; reset reset with Russia; constant public scapegoating of his predecessors, especially Bush; missile defense and then no missile defense in Eastern Europe; Guantanamo, renditions, drones, and preventive detentions all bad in 2008 and apparently essential in 2009; civilian trials for terrorists and then not; and Orwellian new terms like overseas contingency operations, workplace violence, man-caused disasters, a secular Muslim Brotherhood, jihad as a personal journey, and a chief NASA mission being outreach to Muslims. We forget that the non-interventionist policies of Jimmy Carter abruptly ended with his bellicose “Carter Doctrine” — birthed after the Soviets invaded Afghanistan, American hostages were taken in Tehran and Khomeinists had taken power, China went into Vietnam, and Communist insurgencies swept Central America.

As for Dwight Eisenhower, of course he was an admirable and successful president who squared the circle of trying to contain expansionary Soviet and Chinese Communism at a time when the postwar American public was rightly tired of war, while balancing three budgets, building infrastructure, attempting to deal with civil rights, and promoting economic growth. Yet the Republican Ike continued for six months the identical Korean War policies of his unpopular Democratic predecessor Harry Truman, and helped to lay the foundation for the Vietnam interventions of his successors, Democrats John F. Kennedy and Lyndon Johnson. That the initial blow-ups in Korea and Vietnam bookended his own administration may have been a matter of luck, given his own similar interventionist Cold War policies.

Bush was probably no Ike (few are), and certainly Obama is not either. But to score contemporary political points against one and for the other by reinventing Eisenhower into a model non-interventionist is a complete distortion of history. So should we laugh or cry at the fantasies offered by Andrew Bacevich? He writes: “Remember the disorder that followed the Korean War? It was called the Eisenhower era, when budgets balanced, jobs were plentiful and no American soldiers died in needless wars.”

In fact, the post–Korean War “Eisenhower era” was characterized by only three balanced budgets (in at least one case with some budget gimmickry) out of the remaining seven Eisenhower years. In 1958 the unemployment rate spiked at over 7 percent for a steady six months. Bacevich’s simplistic notion that “jobs were plentiful” best applies to the first six months of 1953, when Ike entered office and, for the only time during his entire tenure, the jobless rate was below 3 percent — coinciding roughly with the last six months of fighting the Korean War. This was an age, remember, when we had not yet seen the West German, South Korean, and Japanese democratic and economic miracles (all eventually due to U.S. interventions and occupations), China and Russia were in ruins, Western Europe was still recovering from the war, Britain had gone on a nationalizing binge, and for a brief time the U.S. was largely resupplying the world, and mostly alone — almost entirely with its own oil, gas, and coal. Eisenhower’s term was characterized by intervention in Lebanon, fighting for stalemate in Korea, CIA-led coups and assassinations, the insertion of military advisers into Vietnam, new anti-Communist treaty entanglements to protect Southeast Asian countries, a complete falling out with our European allies, abject lies about spy flights over the Soviet Union, serial nuclear saber-rattling, and Curtis LeMay’s nuclear-armed overflights of the Soviet Union — in other words, the not-so-abnormal stuff of a Cold War presidency.

And the idea that, to quote from Doris Kearns Goodwin, Eisenhower “could then take enormous pride in the fact that not a single soldier had died in combat during his time” is, well, unhinged.