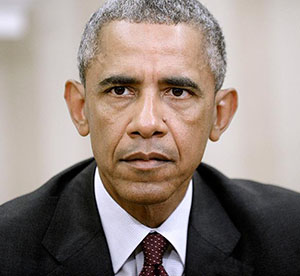 How much damage can he do in his last year of office?

Insidiously and inadvertently, Barack Obama is alienating the people and moving the country to the right. If he keeps it up, by 2017 it will be a reactionary nation. But, counterintuitive as it seems, that is fine with Obama: Après nous le déluge.

By sheer force of his personality, Obama has managed to lose the Democratic Senate and House. State legislatures and governorships are now predominantly Republican. Obama’s own favorable ratings rarely top 45 percent. In his mind, great men, whether Socrates or Jesus, were never appreciated in their time. So it is not surprising that he is not, as he presses full speed ahead.

Obama certainly has doubled down going into his last year, most recently insisting on letting in more refugees from the Middle East, at a time when the children of Middle Eastern immigrants and contemporary migrants are terrorizing Europe. What remaining unpopular executive acts might anger his opponents the most? Close down Guantanamo, let thousands more refugees into the United States, free thousands more felons, snub another ally, flatter another enemy, weigh in on another interracial melodrama, extend amnesty to another million illegal aliens, make global warming laws by fiat, expand Obamacare, unilaterally impose gun control? In lieu of achievement, is the Obama theory to become relevant or noteworthy by offending the public and goading political enemies?

An Obama press conference is now a summation of all his old damn-you clichés — the fantasy strawman arguments; the caricatures of the evil Republican bogeymen; the demagogic litany of the sick, the innocent, and the old at the mercy of his callous opponents; the affected accentuation (e.g., Talîban; Pakîstan, Îslám, Latînos, etc.) that so many autodidacts parade in lieu of learning foreign languages; the make-no-mistake-about-it and let-me-be-clear empty emphatics; the flashing temper tantrums; the mangled sports metaphors; the factual gaffes; and the monotonous I, me, my, and mine first-person-pronoun exhaustion. What Obama cannot do in fact, he believes he can still accomplish through invective and derision.

In the 2016 election campaigns, most Democratic candidates in swing states will have distanced themselves from the last eight years. Otherwise, they would have to run on the patently false premise that American health care is more affordable and more comprehensive today than it was in 2009; that workforce participation is booming; that scandals are a thing of the past; that the debt has been addressed; that Obama has proved a healer who brought the country together; that immigration at last is ordered, legal, and logical; that the law has never been more respected and honored; that racial relations are calmer than ever; that the campuses are quiet; that the so-called war on terror is now over and won with al-Qaeda and ISIS contained or on the run; that U.S. prestige aboard has never been higher; that our allies appreciate our help and our enemies fear our wrath; that Iran will now not go nuclear; that Israel is secure and assured of our support; and that, thanks to American action, Egypt is stable, Libya is ascendant, Iraq is still consensual, and the Middle East in general is at last quiet after the tumultuous years of George W. Bush.

The hordes of young male migrants abandoning the Middle East for the West are merely analogous to past waves of immigrants and should be uniformly welcome. For Obama,  there is no connection between them and his slashing of American involvement in the Middle East — much less any sense of responsibility that his own actions helped produce the crisis he now fobs off on others.

If an American president saw fit to attack fellow Americans from abroad, and lecture them on their illiberality, there are better places from which to take such a low road than from Turkey, the embryo of 20th-century genocide, and a country whose soccer crowds were recently shouting, “Allahu akbar!” during what was supposed to be a moment of silence offered to the Paris dead. Surely an American president might suggest that such grassroots religious triumphalism about mass death is much more reprehensible behavior than are his own fellow citizens’ demands to vet the backgrounds of refugees.

If you suggested to Obama that, in his search for a contrarian legacy, he should do something to stop the slaughter in the Middle East and be careful about letting in more unexamined refugees, in answer, he would be more likely to do less than nothing abroad and vastly expand the influx of migrants. Getting under his critics’ skin is about all that is left of a failed presidency.

Many of our observers still do not quite grasp that Obama will end his presidency by seeking to get his opponents’ goat — and that his resentment will lead to some strange things said and done.

Few foresaw this critical element of the Obama character. The tiny number of prescient pundits who warned what the Obama years would entail were not the supposedly sober and judicious establishment voices, who in fact seemed to be caught up in the hope-and-change euphoria and missed entirely Obama’s petulance and pique: the Evan Thomases (“he’s sort of god”), or the David Brookses (“and I was looking at his pant leg and his perfectly creased pant, and I’m thinking, a) he’s going to be president and b) he’ll be a very good president.” “It is easy to sketch out a scenario in which [Obama] could be a great president.”), or the Chris Matthewses (“the feeling most people get when they hear Barack Obama’s speech. My, I felt this thrill going up my leg. I mean, I don’t have that too often.”), or the Michael Beschlosses (“Uh. I would say it’s probably — he’s probably the smartest guy ever to become President.”), or the Chris Buckleys (“He has exhibited throughout a ‘first-class temperament,’ pace Oliver Wendell Holmes Jr.’s famous comment about FDR. As for his intellect, well, he’s a Harvard man”), or the Kathleen Parkers (“ . . . with solemn prayers that Obama will govern as the centrist, pragmatic leader he is capable of being”), or the Peggy Noonans (“He has within him the possibility to change the direction and tone of American foreign policy, which need changing; his rise will serve as a practical rebuke to the past five years, which need rebuking; his victory would provide a fresh start in a nation in which a fresh start would come as a national relief.”).

In truth, it was the loud, sometimes shrill, and caricatured voices of talk radio, the so-called crazy Republican House members, and the grassroots loudmouths of what would become the Tea Party who had Obama’s number. They warned early on that Barack Obama’s record was that of a petulant extremist, that his writing presaged that he would borrow and spend like no other president, that his past associations gave warning that he would use his community-organizing skills cynically to divide Americans along racial lines, that nothing in his past had ever suggested anything other than radicalism and an ease with divisive speech, that his votes as a state legislator and as a U.S. senator suggested that he had an instinctual dislike of the entrepreneur and the self-made businessman, and that his past rhetoric advised that he would ignore settled law and instead would rule by fiat — that he would render immigration law null and void, that he would diminish the profile of America abroad, and that he would do all this because he was an ideologue, with no history of bipartisanship but a lot of animus toward his critics, and one who saw no ethical or practical reason to appreciate the more than 60 years of America’s postwar global leadership and the world that it had built. Again, the despised right-wingers were right and the more moderate establishment quite wrong.

Abroad, from Obama’s post-Paris speeches, it is clear that he is now bored with and irritated by the War on Terror. He seems to have believed either that Islamist global terror was a minor distraction with no potential for real harm other than to bring right-wingers in backlash fashion out of the woodwork, or that it was an understandably radical manifestation of what was otherwise a legitimate complaint of Islam against the Western-dominated global system — thus requiring contextualization rather than mindless opposition.

A lot of ambitious and dangerous powers are watching Obama assume a fetal position, and may well as a consequence act foolishly and recklessly this next year. Not only Russia, China, and North Korea, but also Hamas, Hezbollah, Iran, ISIS, and assorted rogue states may take chances in the next 14 months that they would otherwise never have entertained (given that America is innately strong and they are mostly in comparison far weaker) — on the premise that such adventurism offers tangible advantages without likely negative consequences and that the chance for such opportunities will not present itself again for decades to come.

At home, Obama feels liberated now that he is free from further elections. He thinks he has a legitimate right to be a bit vindictive and vent his own frustrations and pique, heretofore repressed over the last seven years because of the exigencies of Democratic electioneering. Obama can now vent and strike back at his opponents, caricaturing them from abroad, questioning their patriotism, slandering them for sport, and trying to figure out which emblematic executive orders and extra-legal bureaucratic directives will most infuriate them and repay them for their supposed culpability for his failed vero possumus presidency.

The more contrarian he becomes, and the more he opposes the wishes of the vast majority of the American people, all the more Obama envisions himself speaking truth to power and becoming iconic of something rather than the reality that he is becoming proof of nothing.

Hold on. We haven’t seen anything yet.