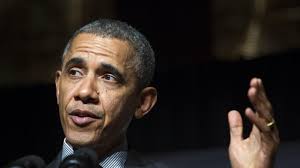 Some, like Ezra Klein, have posited that Rudy Giuliani’s suggestion that Obama may not be patriotic and Scott Walker’s hesitation to assert that Obama is a Christian illustrate a sort of unhinged Obama Derangement Syndrome.

Aside from the fact that Obama himself characterized President George W. Bush as “unpatriotic” (for overseeing deficits at about half the size of the debt that Obama will bestow on us in his tenure), and aside from Nancy Pelosi’s and Harry Reid’s chronic tendency to smear their conservative critics as “un-American,” there should be an easy standard to identify the point at which criticism becomes clinically deranged.

I’d suggest that there is. Certainly, a pathology is at work when writers and artists wish, dream, or fantasize about the death of a sitting president and express such abject, irrational venom in a mainstream venue.

In other words, we should monitor Alfred A. Knopf to ensure that it would not publish another novel like Checkpoint fantasizing about killing then-President Bush, and object loudly if another filmmaker should produce a docudrama like Gabriel Range’s Death of a President indulging in the same fantasies, and watch for anything similar to Guardian “satirist” Charles Brooker’s 2004 op-ed wishing for another John Wilkes Booth or Lee Harvey Oswald to step forward.

By the same token, if a contemporary writer were to publish anything along the lines of Jonathan Chait’s infamous essay “Why I Hate George W. Bush” in the New Republic or a similar magazine, he would instantly qualify for a diagnosis of Obama Derangement Syndrome:

I hate President George W. Bush Barack Obama. There, I said it…I hate the way he walks — shoulders flexed, elbows splayed out from his sides like a teenage boy feigning machismo. I hate the way he talks — blustery self-assurance masked by a pseudopopulist twang. I even hate the things that everybody seems to like about him. I hate his lame nickname-bestowing– a way to establish one’s social superiority beneath a veneer of chumminess (does anybody give their boss a nickname without his consent?). And, while most people who meet Bush Obama claim to like him, I suspect that, if I got to know him personally, I would hate him even more…There seem to be quite a few of us Bush Obama haters. I have friends who have a viscerally hostile reaction to the sound of his voice or describe his existence as a constant oppressive force in their daily psyche.

When conservatives adopt the now apparently mainstream vocabulary of disparagement that Obama, Reid, and Pelosi have institutionalized, it might be rude and unwise, but it could hardly constitute derangement.

On the other hand, if anyone of prominence on the Right should ever emulate the Left’s hate speech and death wishes toward a sitting president, that most surely would be deranged, and should be called out as such.