Much of what we think we know is false; what really happened matters desperately to us today.

This summer will mark the 100th anniversary of the beginning of World War I, and we 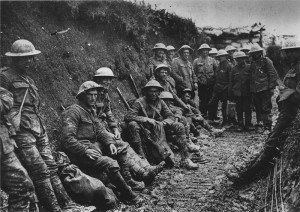 should reflect on the “lessons” we have been taught so often on how to avoid another such devastating conflict. Chief among them seems to be the canard that the Versailles Treaty of 1919 that officially ended the war caused a far worse one just 20 years later — usually in the sense of an unnecessary harshness accorded a defeated Imperial Germany.

But how true is that common argument of what John Maynard Keynes called a “Carthaginian peace”?

Carthage, remember, was truly emasculated after the Second Punic War and utterly razed after the Third; in contrast, Germany was mostly humiliated after 1919. Indeed, Versailles was mild compared with what Germany had subjected France to in 1871 at the end of the Franco-Prussian war — and yet a vengeful France did not preempt Germany in pursuit of payback over the ensuing half-century. The humiliating terms that Germany forced upon Russia at Brest-Litosvk in 1918 were far harsher than anything that Germany suffered at Versailles, and yet did it not lead to Russian insurgencies against Germany, much less lasting enmity between the two states. Just 21 years later, Stalin and Hitler signed a non-aggression pact.

Perhaps the most draconian envisioned treaty in the history of Europe was what Germany might well have intended to inflict on a defeated France and Belgium, had the former won the war in 1914 — the infamous Septemberprogramm proposal, which, if adopted, would have redrawn the entire map of Western Europe. And what the Allies in 1945 demanded of a defeated Germany would have been considered unthinkable in 1919; and yet we have not had a World War III in the ensuing 70 years.

In truth, by the Germans’ own standards of Diktat, Versailles was not harsh. The problem was not so much its terms per se, but its timing, its language, and the methods of its enforcement. By the time the treaty was accepted by the major parties — over seven months after the cessation of fighting (an armistice rather than an unconditional surrender) in the West — many of the Allied forces in the field had stood down. There was certainly less chance of seriously occupying Germany to ensure enforcement. And while the Allied leaders often talked loudly and harshly about German culpability, they failed to grasp that such tough rhetoric without commensurate consequences would only incite a wounded adversary in ways that a combination of quiet and coercion would not. One of the lessons of the aftermath of World War I is that danger mounts when threats go unenforced, and sermons prove both annoying and empty.

There are also myriads of assumed causes of World War I, both immediate and longer-term. The list is well known: arms races, entangling alliances, unchecked nationalism, miscalculation and accidents, lack of diplomacy, ethnic tensions in the Balkans, irrevocable mass mobilizations, the lack of a League of Nations, and on and on.

But the crux is why exactly did Germany believe in late summer 1914 that it could invade neutral Belgium, start a war with France, draw in Britain and Russia (and eventually the U.S.), and expect the Schlieffen Plan to knock out France in a matter of weeks, allowing a redirection to Russia to ensure the same there?

Yet what seems fantastical today was deemed entirely logical in the Germany of 1914 — given prewar British reluctance to support France, American isolation, the utter French collapse in 1871, the Russian humiliation in the Russo-Japanese War of 1904–05, the ongoing political instability that threatened to unwind the Russian czarist state, the amazing surge in German dreadnought construction that promised to nullify traditional British naval supremacy, and the inability of France, Britain, and Russia — and the United States — to craft a credible deterrent force to convince Germany of the folly of any aggressive act, a viable strategy that had actually worked well enough to deter the Kaiser in the prior so-called Moroccan crises.

One of the lessons of the outbreak of World War I is the importance of perceptions. At some point in 1914 the German military and diplomatic community concluded that the country not only could pull off a successful lightning strike against France, but could do so without starting a world war — given various events over the prior decades.

Such flawed thinking is a good reminder that appearances often matter as much as reality in provoking wars. Hitler certainly was suicidal in attacking his de facto partner, the Soviet Union, in June 1941. But for all his crazy ranting about his grievances, Untermenschen, and grand strategy, it was the false perception that the Soviet Union would quickly collapse — given its recent dismal performance in Poland and Finland, and the prior purging of its officer corps, contrasted with the recently successful Blitzkrieg in Poland and Western Europe — that persuaded Hitler to try something so fatally dangerous.

More so than almost any other war, World War I was tragic, an inexplicable 9 million killed in four years of legalized murder. But such folly does not mean that concepts of victory and defeat disappeared amid the horror. They remain eternal concepts that transcend the politics and even the carnage of any age. In the case of World War I, Germany most certainly lost the war, ending the imperial plans of the Kaiser and Germany’s notion of serial expansion of its western and eastern borders.

We can talk of a general sameness throughout prewar, early-20th-century Europe — shared confidence in the new technological age and interconnected economies and finance, somewhat similar parliamentary governments, a common Christianity, homogeneous ruling aristocracies — that should have made war unthinkable.

But all that said, what Germany planned for Western Europe was quite different from what the latter planned for the former. A French preemptive attack on Germany to break up the German empire or take revenge for territory lost in 1871 simply was not in the cards. And a Europe controlled by the Kaiser would have been a quite different place from what followed under French and British democracy in 1919, as weak and often pitiful as the latter could at times be.

We can remain appalled at the savagery of trench warfare and the utter horror of Verdun and the Somme. Yet, it is hard to know exactly how else France and Britain were to stop the Kaiser’s push westward — given the excellence of the huge German army, its superb staff work, morale, logistics, weaponry, and organization. Stopping that juggernaut — at that time the most lethal army in Western civilization’s history — given relative forces in 1914, would have seemed an impossible task.

Yet by 1919, both democratic France and Britain were intact and victorious, Germany and its satellite, Austria-Hungary, defeated. Allied war aims were largely achieved, and the Central Powers’ objectives thwarted. Most wars are stupid, horrific, and waged insanely, but that does not mean that there are not to be winners and losers, even if such designations are subject to readjustments in subsequent years.

The American leaders have talked grandly of victory being an obsolete concept in Iraq. But it was not: We had won the war by May 2003, almost lost it by November 2006, and then clearly won it by January 2009 following the surge. Then again, we may well have lost it — at least in the sense of our original objective of creating a stable constitutional state antithetical to Saddam Hussein’s oil-fed agendas — by our abject pullout in 2011.

World War I reminds us that even amid the worst carnage imaginable there will likely be a victor and a loser, even if both sides would usually have been far better off negotiating rather than destroying their youth over sometimes solvable differences. That sophisticated Westerners deny this fact does not make it go away, much less convince their adversaries of the futility of ideas like victory and defeat.

We can still learn lots from World War I, if only in the sense of how to avoid disasters of this nature — especially given the present age of gathering war clouds not unlike those in 1914 and 1939.

China, like the Westernized Japan of the 1930s, wants influence and power commensurate with its economic clout, and perhaps believes its growing military can obtain both at the expense of its democratic neighbors without starting a wider war. North Korea is not convinced that demanding concessions from South Korea — or simply humiliating it and the U.S. — by threats of war would not work. Iran trusts that the age of the U.S. mare nostrum in the Mediterranean is over, that the Sunni Persian Gulf oil sheikdoms are spent, that once-unquestioned Western guarantees to Israel are now negotiable, that nuclear acquisition is an agreed wink-and-nod obtainable enterprise, and that terrorist appendages can achieve political objectives in the Middle East just as effectively as carrier groups.

Putin dreams that the Russian imperial world of the 1950s can live again, through coercion, Machiavellian diplomacy, and the combined lethargy of the EU and the U.S. — and he often is willing to take some risks to refashion current realities. Failed socialist and Communist states in Latin America nonetheless believe that a distracted or uninterested U.S. no longer cares to make the argument that transparent democratic capitalism is the region’s only hope for the future. The miseries of Bolivia, Cuba, Ecuador, Nicaragua, and Venezuela are apparently no reason for them to feel that they should not extend them to other countries.

Amid all that, a minor bow and apology here, or an inadvertent pink line and empty deadline there, matters. Gratuitous talk of “reset” and “lead from behind,” coupled with serial scapegoating of past U.S. policies and presidents, massive new debt and vast cuts in defense, also sends a message to our rivals and enemies that occasional gambles and aggressive moves that would usually be seen as stupid and suicidal may not be any more.

We are reverting to our posture of 1938–40, when the United States talked very loudly of what it might do and what the Axis should not do, but had no intention of backing up such sanctimoniousness with force and was more likely to cut than augment its defenses.

War is the messy arbiter of peacetime false perceptions about relative power. Peace returns when all the nations involved have learned, after great agony, what they really could and could not do. Or as Thucydides sighed, war is “a harsh schoolmaster.”

Given that reality, the U.S. should start quieting down and stepping up, rather than stepping back while sounding off — before others come to believe that their own wild fantasies are reality, and the harsh schoolmaster of war intercedes to correct everyone’s shared false perceptions.