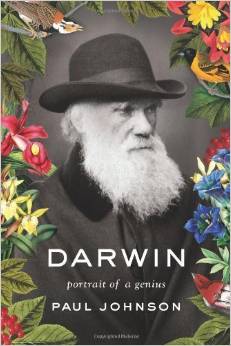 It is a measure of the cultural contamination of materialism, given great impetus by Charles Darwin, that even a giant like Paul Johnson can be infected and attenuated by it. For Johnson is one of the magisterial writers of our time whose erudition and immense energy have enlightened so many of us for so many years. Yet this biography is a disappointment in contrast to most all of his previous work. Indeed it is unfortunate that Johnson did not apply his wit and critical talents, as shown in his masterful Intellectuals, to his present subject, Charles Darwin. Oh, what a penetrating study it would have made!

Despite my predilections, Johnson moves in the opposite direction in this book, attempting to lay on yet another coat of bronze to the iconic figure of Darwin. But like all carriers of what Raymond Tallis calls Darwinitis, Johnson never gets around to explaining exactly what was Darwin’s genius. Though there are plenty of sputtering attempts at it, all that the book presents are the usual empty generalities about “Darwin the scientist” and “Darwin the humble self-critic” in addition to the conventional contradictions and misunderstandings about Darwin’s ideas.

Darwin’s ideas, though feeble in the first place and borrowed or even plagiarized in the second place, captivated the intellectuals and the Whiggish middle and upper classes in England who were well prepared to accept his ideas on biological “evolution,” blithely conflating them with progressive movements for social change. Johnson captures this social history surrounding Darwin’s time very well, perhaps making the book worth the read. He writes, “By the mid-1840s, the idea that societies ‘evolved’ or ‘developed’ as opposed to being created in an instant by God, was so common that Disraeli, always smart and quick to pounce on a fashionable fad, was happy to satirize it.” The brilliant Tory prime minister, Benjamin Disraeli, was on target seeking to parody Darwinitis at its inception.

Late in life, Darwin visited art critic and social philosopher John Ruskin. When Ruskin showed his magnificent Turner watercolors to Darwin, he “took no interest—could see nothing in them.” Ruskin later said that Darwin’s views were “pernicious nonsense” and that “if he would get different kinds of air & bottle them, and examine them when bottled, he would do much more useful work than he does in the contemplation of the hinder parts of monkeys.” Omitted by Johnson is the comment by Richard Owen, the most famous scientist of his day and the man who coined the word dinosaur. As Owen remarked: Darwin’s seminal book, The Origin of the Species, “will be forgotten in 10 years.” Though Owen’s timing was off, he understood the weaknesses of the book.

The first weakness was that its opening premise was based on an obviously false comparison between two things that are profoundly distinct: “artificial selection,” which is the humanly directed activity of breeding plants and animals, and “natural selection,” nature’s blind process. Whereas the former process is governed by intelligence and directed toward a goal, the latter is unintelligent, accidental, and purposeless. While the former has made great improvements in livestock and agricultural production, neither dynamic has been shown to wholly change the structure of any organism or any part of an organism, say a fish fin into a bird’s wing, even over millions of generations. As the Anglican bishop Samuel Wilberforce stated in his penetrating but mostly forgotten 1860 review of the Origin: “We think it difficult to find a theory fuller of assumptions; and of assumptions not grounded upon alleged facts in nature, but which are absolutely opposed to all the facts we have been able to observe.”

Johnson does remind us that Darwin’s ideas had a long gestation period, going back to the ancient Greeks, though he omits Matthew Arnold’s succinct riposte after reading the Origin: “I can’t understand why you scientific people make such a fuss about Darwin. Why, it’s all in Lucretius.” Lucretius, probably unheard of by Darwin, was the pagan, Roman poet who vividly speculated on how the world had made itself by the process that we now refer to as “natural selection”.

Closer to home, Johnson discusses several speculators in evolutionary ideas from whom Darwin drew or even plagiarized. Darwin’s grandfather, Erasmus, for one, invented an evolutionary scheme almost 60 years prior to Charles’ version. And even Darwin’s concept of natural selection, supposedly his unique contribution, was first broached in 1841 by one Patrick Matthew, who had “set out the theory of the selection of the fittest by nature.” Though Darwin claimed that no one else had heard of Matthew, “this was not quite true,” Johnson intimates. Another forerunner of Darwin was Edward Blyth, a well-traveled Victorian naturalist whose ideas paralleled Darwin’s. Fortunately for Darwin neither of these men voiced any claims when the Origin was published in 1859. Though Darwin was “a generally honest and generous man,” Johnson says, “his behavior toward these two raises questions about his sense of justice.”

Yet another Englishman, Robert Chambers, helped pave the way for Darwin in his 1844 book, Vestiges of the Natural History of Creation, which made “evolution appear almost ‘normal’ and acted as a lightning rod to deflect any real chance of combustion by the time the Origin was published.” Alfred Wallace, often called the co-discover of evolution, also came up with the same ideas as Darwin. However, Wallace, to Darwin’s disgust, insisted that nature alone was incapable of orchestrating all its complexities, including humans whose intellectual, aesthetic, and emotional capacities exceeded those necessary for mere survival. Wallace insisted that Darwin’s unequivocal reliance on nature to do all the heavy lifting of creation was not empirical, besides being obviously inadequate for the task.

Despite the fact that Johnson captures the aura of Victorian England, he fails at what he does best: placing his subject in its larger setting. As it happened, the most important thing going on among the intelligentsia of 19th-century Europe was the replacement of Christianity with materialism, the belief that everything originates in matter and remains matter, and therefore nothing really matters in the meantime. A significant force espousing this revival of materialism was German Higher Criticism which asserted that the Bible was not an exceptional narrative but should be reduced to the level of folk tale and legend.  In France, Auguste Comte claimed that reducing social problems to the level of a scientific experiment would solve them, and Karl Marx sat in the British Museum and hatched his theory of “historical materialism” which was predicated on the notion that the inexorable, evolving forces of history would make “the new man”. This intoxicating environment nourished Darwin’s speculations and he more than returned the favor to these intellectual benefactors by providing them with a totally materialistic origins story.

Johnson’s failure to mention these influences is disappointing since in two of his superb works, The History of the Jews and The History of the Modern, he examines the underpinnings of the materialistic launching pad that was the 19th century. This omission, in its own way, permits more credit to be given to Darwin as an intellectual pioneer who Johnson claims was a “scientific polymath.” Yet, on the same page with this claim, Johnson concedes that Darwin was weak in anthropology, languages, and mathematics, the latter subject necessary for a scientist to have mastered, as Johnson readily admits.

Though evolutionary and progressive ideas were becoming common, Darwin rightly feared that his ideas would incite social unrest among some traditionalists. Added to that, he was a withdrawn individual who sought to avoid conflict and so gladly deployed flak catchers like Thomas Huxley to confront challengers. In this context, Johnson discusses the riots and threats that were directed toward the atheist clergyman and discoverer of oxygen, Joseph Priestly, which finally forced him to exile himself to America in 1794. The fear of such a series of events directed toward himself preyed upon Darwin and upset his nervous stomach, something which plagued him throughout his life.

Like many others, Johnson tries to fit Gregor Mendel, the Moravian, Augustinian monk, into the Darwinist mold. However, Darwin thought that inheritance involved a blending of traits, a process akin to mixing different colored paints. Mendel, less bound to that premise, discovered something akin to what we now call “genes” by showing that inheritance is a process of passing on particular traits, more like mixing different colored marbles. As one Mendel scholar writes, “Mendel’s concept of discrete characters was completely opposed to Darwin’s idea of continuous variation.” Johnson charitably covers for Darwin here by saying that his failure to match Mendel’s insight was due to his ignorance of mathematics.

Johnson also appears not to grasp that Darwin, fearful and reticent as he was, didn’t reveal his deepest inclinations in his writing, including his autobiography. This is also disappointing since in Intellectuals Johnson demonstrates a keen understanding of the duplicity of the human heart, especially among the intelligentsia. For as Stanley Jaki has written, “The publication in full of Darwin’s Early Notebooks forces one to conclude that in writing his autobiography Darwin consciously lied when he claimed that he had slowly, unconsciously slipped into agnosticism. He tried to protect his own family as well as the Victorian public from the shock of discovering that his Notebooks resounded with militant materialism.” In supporting his materialist presuppositions, Darwin’s target was man’s mind—the “citadel,” to use his term—which had to be conquered in order to dethrone man and place him on the level of a mere animal caught in a purposeless flux. Johnson, either unaware of Darwin’s materialist presumption or choosing to ignore it, buys into the conventional portrayal of Darwin as a personification of “Baconian science”, named after the Elizabethan polymath Francis Bacon, the exemplar of the empirical method in science.
In a similar vein, Johnson seeks to protect Darwin by attacking contemporary “Darwinist fundamentalists,” those who deify Darwin and “abuse” anyone who challenges the master and his work. This is fair enough since we all oppose idolatry and abuse. However, the truth is that Darwinist fundamentalists merely continue the tradition of invective deployed by individuals like Huxley, a.k.a. “Darwin’s Bulldog,” and others who were permitted when not encouraged by Darwin to defend his ideas with malice and ferocity toward his critics. In fact, the respected British journal Nature was founded as an organ to defend and promote Darwinism. As Janet Brown, an important biographer of Darwin, writes, “Far more than any other science journal of the period, Nature was conceived, born and raised to serve polemic purpose.”
Furthermore, “Darwinian fundamentalists” like Richard Dawkins also represent Darwin’s original goal to free science from “religious superstition”, mainly Judeo-Christianity, and recast it as a vehicle for progressive ideas and atheistic, materialist philosophy. This has turned out to be a crucially destructive change wrought by Darwinists over the last 150 years, not only within the scientific community but in the larger society. And this version of science, with its prestige spilling over into other areas, has served as the model for the marginalization of theology, ethics, and metaphysics by portraying them as unscientific, mere matters of personal taste to be treated patronizingly when not ignored.

If this is to be what Darwin bequeathed us, the basis of his putative genius in profoundly redirecting society, then so be it. But then let us understand wherein lay his genius.