Far from being repentant of the Armenian Genocide, Turkey, under the leadership of Prime Minister Erdogan, is again targeting Armenians; is again causing their

In the early morning hours of March 21, al-Qaeda linked Islamic jihadis crossed into Syrian territory from the Turkish border and launched a jihad on the Christian/Armenian town of Kessab.   Among other thing, “Snipers targeted the civilian population and launched mortar attacks on the town and the surrounding villages.”  Reportedly eighty people were killed.

The jihadis later made a video touring the devastated town.  No translation is needed, as the main phrase shouted throughout is Islam’s triumphant war cry, “Allahu Akbar” (or, according to Sen. John McCain’s translation, “thank God”).

Eyewitnesses say the jihadis crossed the Turkish border into Syria, “openly passing through Turkish military barracks. According to Turkish media reports, the attackers carried their injured back to Turkey for treatment in the town of Yayladagi.” END_OF_DOCUMENT_TOKEN_TO_BE_REPLACED

Israel’s enemies are doing more damage to each other than Israel ever could.

Israel could be forgiven for having a siege mentality — given that at any moment, old frontline enemies Syria and Egypt might spill their violence over common borders.

The Arab Spring has thrown Israel’s once-predictable adversaries into the chaotic state of a Sudan or Somalia. The old understandings between Jerusalem and the Assad and Mubarak kleptocracies seem in limbo.

Yet these tragic Arab revolutions swirling around Israel are paradoxically aiding it, both strategically and politically — well beyond just the erosion of conventional Arab military strength. END_OF_DOCUMENT_TOKEN_TO_BE_REPLACED

When we don’t support our potential allies and encourage constitutional rule, Egypt is the result.

In Egypt the Obama administration has managed to alienate the military, secular constitutionalists, the Islamists, and the proverbial street all at once. How and why? END_OF_DOCUMENT_TOKEN_TO_BE_REPLACED 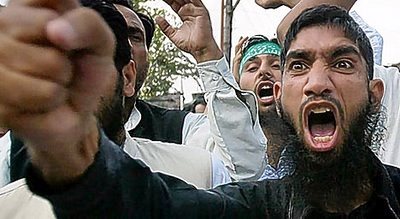 In 2012 in Pakistan, as Christian children were singing carols inside their church, Muslim men from a nearby mosque barged in with an axe, destroyed the furniture, desecrated the altar, and beat the children.  Their justification for such violence?  “You are disturbing our prayers…. How dare you use the mike and speakers?” END_OF_DOCUMENT_TOKEN_TO_BE_REPLACED

While unrest in Turkey continues to capture attention, more subtle and more telling events concerning the Islamification of Turkey — and not just at the hands of Prime Minister Erdogan but majorities of Turks — are quietly transpiring. END_OF_DOCUMENT_TOKEN_TO_BE_REPLACED

The Islamic jihad against Christians in Nigeria is proving to be the most barbaric. END_OF_DOCUMENT_TOKEN_TO_BE_REPLACED

If the UN now has the right and duty to intervene, in a morally relative manner, in territorial disputes between various groups and grant de factosovereignty, then the sky is the limit. Why go through the motions of two-party discussions at all? END_OF_DOCUMENT_TOKEN_TO_BE_REPLACED

The so-called “Arab Spring” continues to transition into a “Christian Winter,” including in those nations undergoing democratic change, such as Egypt, where the Muslim Brotherhood and the Salafis dominated the elections — unsurprisingly so, considering the Obama administration has actually beentraining Islamists for elections. END_OF_DOCUMENT_TOKEN_TO_BE_REPLACED

The surreal moral idiocy that characterizes hatred of Israel is illustrated daily by states whose actions are shrugged away by the international media. END_OF_DOCUMENT_TOKEN_TO_BE_REPLACED

News that the top echelon of Turkey’s military offered their joint resignations is not much of a surprise, given ongoing politicized trials against particular officers, and the general acceptance that a secular military is at odds with an increasingly Islamicized government. But there will be lots of long-term ramifications. END_OF_DOCUMENT_TOKEN_TO_BE_REPLACED