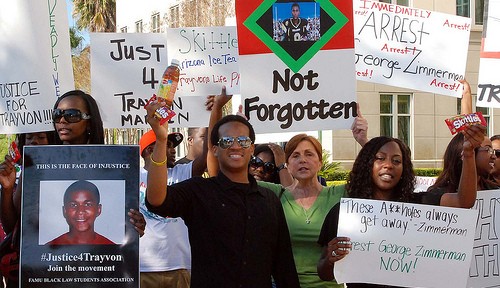 The trial of George Zimmerman is over, but the persecution of him by the race industry isn’t. The Department of Justice is currently combing through the case to find some pretext, no matter how specious, for charging Zimmerman with a violation of civil-rights laws. No matter that the FBI investigation has eliminated race as a factor in Zimmerman’s actions, or that the prosecutors in Florida studiously ignored race as a motive. Under Attorney General Eric Holder, the DOJ has become the Luca Brasi of the race industry, enforcing the self-serving, racialist narrative that in part propelled Holder’s boss into the White House. So don’t be surprised if the DOJ seizes the opportunity.

Indeed, the specter of a DOJ trial is just the latest in a series of events, from the Duke lacrosse team prosecution to Holder’s abuse of the Voting Rights Act, that demonstrate the mendacious, hypocritical racial ideology that permeates our politics and institutions. The central theme of this narrative is the endemic, eternal white racism that accounts for every dysfunction in the black community. No amount of progress, from the remarkable expansion of the black middle class to the utter discrediting of old-school racists like the Ku Klux Klan, can alter this narrative, for the simple reason that a significant number of black politicians, professors, federal and state employees, and activists gain power and money by exploiting the “racism” meme.

Consider the reaction to the trial from the usual race-hack subjects. Hilary Shelton, head of the NAACP Washington Bureau, said, “Those of us who are fathers, particularly of African-American boys, find it [the acquittal] shockingly frightening.” The message, he says, is “Not only can we do this, we can get away with it.”

Well, what should be “shockingly frightening”  is the fact that 64% of black children live in homes without a father. Huge numbers of black men are siring children they do not take responsibility for, and are getting away with it. This means that Shelton is speaking about a minority of black men when he evokes “those of us who are fathers,” a minority that no doubt comprises those blacks who are better educated and better employed than the other two-thirds. In other words, Shelton is exploiting the social and economic dysfunctions of under-educated, under-employed clients of the welfare state in order to justify the power and influence of the NAACP.

Then there’s the implication that whites itch to murder blacks, and when they do they can depend on a racist jury to let them off. What Shelton is ignoring, of course, is the fact that black youths are murdering each other at a “shockingly frightening” rate. The homicide rate is 28.8 per 100,000 for black youths between the age of 10 and 24, but only 2.1 per 100,000 for whites in the same cohort. Worse yet, 90% of black murder victims are killed by other blacks. A few weeks before the Zimmerman verdict, Chicago reached 200 murder victims, including some children. But in the midst of such slaughter, the race-hacks were fulminating over a “white Hispanic,” as The New York Times called Zimmerman, who killed a black youth while defending himself. Clearly, the race industry is concerned not with black men dying, but with exploiting selected incidents that feed the white-racism narrative.

All this, of course, has been pointed out over the past few months, yet Shelton still goes on record with a ridiculous narrative of homicidal racist whites murdering innocent blacks. The fact is, blacks have murdered hundreds of times more blacks than the 4743 blacks lynched between 1882-1968. In 2011, 6329 blacks were murdered. Of those murders where the race of the offender was known, 2447 of 2695 victims were killed by other blacks, suggesting that of those some 6000 murder victims, over 5000 were killed by other blacks just in one year. And by the way Mr. Shelton, in 2011, whites killed 193 blacks, while blacks killed 448 whites.

Equally preposterous is the whole redefinition of “racism” necessary for the race-hacks to camouflage the fact that genuine racism––the belief in the innate intellectual and moral inferiority of blacks no matter what their education or economic status––has withered to a handful of marginal cranks. Thus we get the following, from a law professor at the University of Florida: “I think you could make out the case that unconscious racism caused Mr. Zimmerman to profile” Trayvon Martin. Of course, “unconscious racism” is not a fact of science, but a pseudo-scientific confection based on two-bit Freudian assumptions of behavior no more credible than phrenology or mesmerism. No one can explain a physiological mechanism whereby actions are driven by some ghost-Klansman-in-the-machine rather than choice or instinctive reactions.

Like “institutional racism,” “unconscious racism” is the rhetorical perfume used to hide the fact that actual racism has little to do with the problems afflicting many blacks today. These dysfunctions are cultural, in the main a consequence of the breakdown in morality, religious faith, and restraint that was institutionalized in the 60’s, mostly by whites who could better afford it. The doctrine of “If it feels good, do it,” whether “it” is sex, drugs, laziness, or crime, is destructive enough for the middle and upper classes, but it has been devastating for the poor and lower classes. And for blacks, just at the moment when increasing economic opportunity and the Civil Rights Act had removed the legal barriers to black advancement, the culture began systematically destroying the virtues and morals––especially self-restraint, delayed gratification, and self-reliance––necessary for taking advantage of the new opportunities. That so many blacks resisted this public validation of immorality, dependence, and license is testimony to the strength of black culture and faith.

Finally there is the illiberal identity politics that abandoned the central morality of the Civil Rights movement––that human rights inhere in individuals, not categories––and instead institutionalized the notion that identity is predicated on groups defined by superficial physical characteristics, and by their historical victimization by the dominant white culture. This means that there is ultimately an impermeable barrier between white and black, victimizer and victim, an idea encapsulated in the popular t-shirt slogan, “It’s a black thing, you wouldn’t understand.”

This dubious idea was voiced by another law professor after the Zimmerman verdict, this one from the University of Miami. Noting that the six-person jury comprised 5 whites and 1 Hispanic, the professor said, “You want to have people of color on your jury because sometimes their experience with the police is something that white people don’t have.” Notice the assumptions: all black people are victims of police misbehavior, and all white people aren’t. Moreover, deciding guilt or innocence based on facts and law isn’t the key to a jury trial, but empathy for and identification with the accused or the victim, subjective emotional states that can miscarry justice as much as irrational bigotry or prejudice (See Trial, O.J. Simpson). Worse yet is the implication that all black people are victims, and all have run-ins with the racist police, so any random black person no matter his economic status or education can identity with another black person no matter how different. Of course, this idea dehumanizes individuals into cultural stereotypes, and ignores their unique complexity.

But all these dimensions of the race-industry narrative are very useful for black professors, activists, and politicians. Better-educated and more well-off than millions of whites, they can rationalize their privilege by leeching off the suffering and dysfunction of the black underclass, and then leverage white guilt for their own advancement. Meanwhile millions of blacks remain underemployed and uneducated, victims of crime, drugs, sexual carelessness, and the liberal racist plantation of dependency and victimhood.