After all the brave words and feel-good marches, what significant action will be taken? 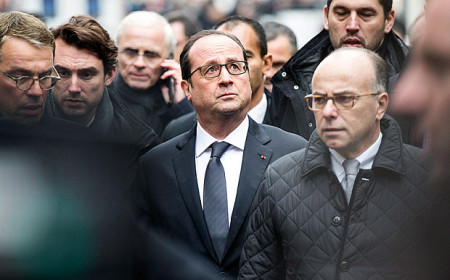 The jihadist murderers are dead, after killing five more Parisians, but many Westerners, long drugged by bad ideas and received wisdom, continue to sleepwalk through the war against jihadism. This means that after all the brave words and feel-good marches, little significant action will be taken to prevent such atrocities from happening again.

In the absence of clear thinking and recognition of fact, responses to this latest example of Muslim violence reflect ideological fever dreams. “Nothing to do with the Muslim religion,” as French president François Holland said of the attacks, is a perennial favorite. Such apologists invoke shopworn Marxist bromides like colonialism, or postmodern magical thinking like “Orientalism,” the two-bit Foucauldian invention of Egyptian-American literary critic and fabulist Edward Said. This was the tack taken by an American historian of Egypt who told a New York Times reporter that Islam was “’just a veneer’” for [jihadist] anger at the dysfunctional Arab states left behind by colonial powers and the ‘Orientalist’ condescension many Arabs still feel from the West.”

For many apologists, though, it’s just easier to call the jihadists “crazy.” Here’s Vox’s Ezra Klein, long-time purveyor of progressive orthodoxy, opining on the Paris murders. He fingers “the madness of the perpetrators, who did something horrible and evil that almost no human beings anywhere ever do, and the condemnation doesn’t need to be any more complex than saying unprovoked mass slaughter is wrong.”

This repeats Jimmy Carter’s mistake about the Ayatollah Khomeini, whom he called a “crazy man.” But jihadists are not insane, and their violence cannot be dismissed so simply. They are proud Muslims, adherents of a 14-centuries-old faith that conquered its way to one of history’s largest empires, the warriors before whom a now dominant, arrogant West once trembled. Their faith preaches that Allah wills the whole world to be united under the rule of Islam and its illiberal, totalitarian law code. Those who resist and refuse to convert are defying Allah; they are the enemies of Islam, the denizens of the “House of War” who endanger the spiritual wellbeing of the faithful in the “House of Islam.” As such, the infidels are the legitimate objects of Muslim violence, conquest, enslavement, and dominance, an aggression recorded on every page of history. If you want contemporary evidence for the reality of jihad, look around the world today, where Muslim violence is endemic, and accompanied by theological arguments drawn straight from Islamic scripture, theology, and jurisprudence.

So contra Klein, the Paris jihadists didn’t do something “that almost no human beings anywhere ever do.” As we speak, plenty of Muslim human beings every day in Nigeria, Libya, Syria, northern Iraq, Afghanistan, and Yemen, to name a few venues of jihadist violence, are doing “horrible” things like murder, torture, beheadings, rape, sex-slavery, crucifixion, and all the other atrocities that are also copiously documented in the history of Islamic conquest and occupation. As a brave Egyptian critic of Islam, Ahmed Harqan, asked recently, “What has ISIS done that Muhammad did not do?” Thus it’s no coincidence that of the 7 global conflicts costing at least 1000 lives a year, 6 involve Muslims.

Yet progressive orthodoxy dismisses this evidence as Islamophobic bigotry. Unable to deny the reality of theologically inspired Muslim violence daily filling the international news, they resort to blaming Western historical crimes, or scapegoating Israel. Another tack is to invoke the tu quoque fallacy, charging that Hebraism and Christianity are just as violent as Islam.

This argument took off after 9/11 and has persisted among the jihad deniers. Historian of religion Philip Jenkins claimed, “The Islamic scriptures [about war] in the Quran were actually far less bloody and less violent than those in the Bible.” Rabid anti-Zionist and apologist for terrorists Richard Falk played the moral equivalence card: “The Great Terror War has so far been conducted as a collision of absolutes, a meeting ground of opposed fundamentalists.” Atheist gadfly Richard Dawkins complained about “fundamentalist” Christians who “fuel their tanks at the same holy gas station” as Muslim terrorists. Similarly, a few years ago, Salon ran a headline asking, “What’s the difference between Palin and Muslim fundamentalists? Lipstick.” This specious moral equivalence descended into the absurd after the attacks in Paris, when a guest on MSNBC equated “Islamic extremism,” which murders thousands a week, with preacher Jerry Falwell’s 1988 unsuccessful libel suit against Hustlermagazine.

But even right-thinking people slip into this species of apologetics. A writer atPajamas Media, in an otherwise perceptive analysis, wrote this as well: “Unfortunately, this civilizational friction between the west and Islam has ebbed and flowed across the centuries.  It is nothing new.  Islam threatened the gates of Vienna and the Crusades reached the Holy Land.” This smacks of the “cycle of violence” trope usually used against Israel. What it ignores is the fact that someone started the violence by serially invading and conquering the lands of others, and enslaving and oppressing their people. The siege of Vienna in 1683 was the last in a long history of Islamic military aggression against Europe and the centuries-long occupation of Western lands; the Crusades were an attempt to liberate from oppressive occupiers a land that had been Christian for centuries before being invaded by the armies of Islam.

Most important, however, is the simple fact that the violence in the Old Testament is, as Raymond Ibrahim points out, descriptive, not prescriptive. It reflects the brutal reality of its times, not a theology binding the faithful for all times. As for the New Testament, the only violent verses apologists can dredge up, as a New York Times article did last week, come from the apocalyptic predictions of Revelations, or these words of Christ from Matthew: “I come not to bring peace, but a sword.” Grade-school catechumens know that this is a metaphor, not a call to jihad, like the Koranic verses instructing Muslims to “slay the idolaters wherever you find them,” or to “fight those who do not believe in Allah,” or to “kill them wherever you find them.”

The whitewashing of Islam’s violent prescriptions serves another fantasy, the idea that there are vast majorities of “moderate” Muslims whose “religion of peace and tolerance” has been “highjacked” by a tiny number of “extremists.” Yet most who make this case just assert it, rather than providing empirical evidence. Wall Street Journal columnist Peggy Noonan, for example, quoted one of the Danish cartoonists who had to go into hiding after being attacked at his home for drawing one of the infamous Mohammed cartoons. He is hoping for “a reaction from the moderate majority of Muslims against this attack [in Paris].” Noonan then responds, “That majority actually exists, and should step forward.” This call to moderate Muslims was also made in theWall Street Journal by French public intellectual Bernard-Henri Levy: “Those whose faith is Islam must proclaim very loudly, very often and in great numbers their rejection of this corrupt and abject form of theocratic passion.”

But we’ve been waiting ever since 9/11 for moderate Muslims to “step forward” and “proclaim very loudly” that the jihadists have distorted their faith. A few apologists, brave critics, and duplicitous spin-doctors have spoken out, but the Muslim masses globally have been mostly silent. Of course, many Muslims have no desire to follow Islam’s precepts about waging jihad, and just want to live their lives in peace. But there have not been mass marches protesting those who murder in their name and who allegedly “corrupt,” as Eric Holder said in Paris, Islamic theology. Perhaps last Sunday’s rally of over a million Parisians will turn out to be an exception, assuming it included significant numbers of Muslims. But will there be any follow-through after the emotional high passes? Or will this moment of multicultural brotherhood dissipate, as it did following France’s 1998 World’s Cup soccer victory, when a million Parisians gathered in celebration?

This silence of the Muslim masses about jihadist terror has been the case for over a decade of such attacks. In 2004 after the brutal murder of Theo van Gogh in the streets of Amsterdam––another attack on free speech––only a handful of Dutch Muslims attended a public rally and memorial service. In the intervening years, after similar attacks––like the murder of 7 French Jews and soldiers in 2012, or the 3 Jews massacred in Brussels in 2014––we have not seen the kind of public, unequivocal, unqualified, mass condemnations of the jihadists one would expect if the latter were a fringe whose beliefs are so alien to traditional Islam.

What we have seen are thousands of Muslims celebrating in the streets after 9/11. We have seen riots and murders in response to Westerners exercising the right to free speech. We have seen rallies against Israel in which nakedly genocidal rhetoric is indulged––“Hamas, Hamas, Jews to the gas” is a favorite–– and temples attacked, as happened during Israel’s war against Hamas last summer. And we have seen polls consistently demonstrate that significant numbers of Muslims, including large majorities in the Middle East, continue to support an illiberal, intolerant shari’a law that codifies the attitudes and beliefs justifying such violence.

Our ancestors for centuries acknowledged the true nature of Islam, a simple fact proven by 1000 years of Muslim aggression. Alexis de Tocqueville, one of our most brilliant political philosophers, wrote in 1838, “Jihad, Holy war, is an obligation for all believers. … The state of war is the natural state with regard to infidels … [T]hese doctrines of which the practical outcome is obvious are found on every page and in almost every word of the Koran … The violent tendencies of the Koran are so striking that I cannot understand how any man with good sense could miss them.”

But that was when our leaders and intellectuals, schooled by history and experience, their minds not blinded by fashionable self-loathing and incoherent cultural relativism, were “men of good sense.” Our leaders today have slipped into delusional dreams, in which people like Tocqueville or Winston Churchill––who in 1897 said, “Civilization is face to face with militant Mohammedanism”––are dismissed as ignorant bigots and racists who lack our superior knowledge and morality. Meanwhile, the bodies of jihadism’s victims continue to pile up, and Iran’s genocidal theocracy closes in on a nuclear weapon. And many in the West continue to sleepwalk through it all.

14 thoughts on “Western Sleepwalkers and the Paris Massacre”