Only when we recognize the fundamental role Islam plays in the region can we begin to craft sensible policies that put U.S. interests first. 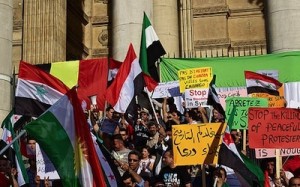 have degenerated into a complex, bloody mélange of coups and counter-coups, as have happened in Egypt; vicious civil wars, like the current conflict in Syria; a resurgence of jihadists gaining footholds in Libya, Iraq, Afghanistan, and the Sinai; and a shifting and fracturing of alliances and enmities of the sort throwing Lebanon and Jordan into turmoil. Meanwhile, American foreign policy has been confused, incompetent, and feckless in insuring that the security and interests of the United States and its allies are protected.

A major reason for our foreign policy failures in the region is our inability to take into account the intricate diversity of ideological, political, and especially theological motives driving events. Just within the Islamist outfits, Sunni and Shia groups are at odds—and this isn’t to mention the many bitter divisions within Sunni and Shia groups. Add the other players in the Middle East––military dictators, secular democrats, leftover communists, and nationalists of various stripes––and the whole region seems embroiled in endlessly complex divisions and issues.

Yet a greater impediment to understanding accurately this bloody and complex region is our preconceived biases. Too often we rely on explanations that gratify our own ideological preferences and prejudices, but that function like mental stencils: they are a priori patterns we superimpose on events to create the picture we want to see, but only by concealing other events that do not fit the pattern. We indulge the most serious error of foreign policy: assuming that other peoples think like us and desire the same goods as we do, like political freedom and prosperity, at the expense of others, like religious obedience and honor.

One persistent narrative attributes the region’s disorder to Western colonialism and imperialism. The intrusion of European colonial powers into the region, the story goes, disrupted the native social and political institutions, imposing in their place racist norms and alien values that demeaned Muslims as the “other” and denigrated their culture to justify the exploitation of resources and markets. This process culminated after World War I in the dismantling of the caliphate, and the creation of Western-style nation-states that ignored the traditional ethnic and sectarian identities of the region. As a result, resentment and anger at colonial occupation and exploitation erupted in Islamist jihadism against the oppressor.

The Islamists themselves have found this narrative a convenient pretext for their violence, thus reinforcing this explanation for some Westerners. The most important jihadist theorist, the Egyptian Sayyid Qutb, wrote, “It is necessary to revive the Muslim community which is buried under the debris of the man-made traditions of several generations, and which is crushed under the weight of those false laws and customs which are not even remotely related to the Islamic teachings.”

Qutb was clearly alluding to the European colonial presence in the Middle East, and specifically to the nearly half-century of British control of Egypt. Al Qaeda, Hamas, and other jihadist groups similarly lace their communiqués with references to colonial “oppression” and neo-imperialist interference, as when Osama bin Laden scolded the U.S. in 2002 for waging war in the region “so that you can secure the profit of your greedy companies and industries.” The Arabs likewise routinely describe the creation of Israel as a particularly offensive act of colonial aggression against the lands of Islam.

Such pretexts, however, are clearly for Western consumption, exploiting the Marxist demonization of imperialism and colonialism that informs the ideology of many leftist intellectuals in Europe and America. When speaking to fellow Muslims, however, most Islamist groups ground their motives in the traditional doctrines of Islam, which call for war against the infidel and the enemies of Islam.

The narrative of colonial oppression may be gratifying to leftist Western intellectuals, but it cannot alone explain the disorder of the region that has persisted long after the exit of the colonial powers. And it is hard to take seriously complaints of imperialism, colonialism, and occupation coming from followers of Islam. After all, Muslims were one of history’s most successful conquerors and imperialists who, as Efraim Karsh writes, “acted in a typically imperialist fashion from the start, subjugating indigenous populations, colonizing their lands, and expropriating their wealth, resources, and labor.”

Something else is needed to explain Islamic violence when India, a British colony for nearly 200 years, or South Africa, another ex-colony subjected to the indignities of racial apartheid, has not spawned global terrorist networks responsible for over 20,000 violent attacks just since 9/11.

The other dominant narrative is a reprise of Wilsonian democracy promotion. In this view, the dysfunctions of the region reflect the absence of open economies, liberal democratic governments, and recognition of human rights. Subjected to autocrats and dictators, the peoples of the Middle East are denied freedom, individual rights, and economic opportunity, and as a result are mired in poverty, oppression, and political disorder that explode into violent jihad.

George W. Bush sounded these themes in January 2005 in his inaugural speech, in which he linked U.S. security and global peace to the “force of human freedom” and the expansion of democracy: “The survival of liberty in our land increasingly depends on the success of liberty in other lands. The best hope for peace in our world is the expansion of freedom in all the world.” Hence Bush’s attempts to build democratic institutions in Iraq and Afghanistan, and President Obama’s early support for the “Arab Spring” revolutions: “I think it was absolutely the right thing for us to do to align ourselves with democracy [and] universal rights.” Both presidents agree that more democracy in the region will mean less of the violence, suffering, and disorder caused by frustration and oppression at the hands of dictators and kleptocrats.

Like the left-wing narrative of colonialism’s blowback in the form of terror and political dysfunction, democracy promotion suffers from the same limitations, particularly the imposition of Western political categories and goods onto a different culture. The fetishizing of democracy ignores the complex network of mores, values, and principles that undergird political freedom and that took over two millennia in the West to coalesce into liberal democracy. And it ignores the absence of those principles and mores in most Middle Eastern countries.

So we focus instead on the photogenic process of voting, the ink-stained fingers and lines at polling booths that we confuse for belief in the liberal foundations of genuine democracy. More important, like the left-wing narrative, democracy promotion is ultimately based on material conditions and the goods of this world––prosperity and individual freedom–– at the expense of religious beliefs. Religion is treated as a private lifestyle choice, as it has become in the West, rather than the most fundamental and important dimension of identity both personal and political, as it is in the Muslim world.

Much of the conflict in the Middle East reflects the collision of these two sets of goods, the religious and the secular, which we oversimplify by emphasizing only the latter. We assume that if a liberal democracy can be created, the tolerance for differences of religious belief, respect for individual rights, and a preference for settling political conflict with legal processes rather than violence, will automatically follow. We forget that in our own history, despite the long tradition of separation of church and state whose roots lie in Christian doctrine, Europe was torn apart by wars of religion that killed millions before that tolerance for sectarian differences triumphed.

The power of Islam is the reality our various narratives ignore or rationalize away when we attempt to understand the violence and disorder of the Middle East. But as the scholar Bernard Lewis reminds us, “in most Islamic countries, religion remains a major political factor,” for “most Muslim countries are still profoundly Muslim, in a way and in a sense that that most Christian countries are no longer Christian . . . in no Christian country at the present time can religious leaders count on the degree of belief and participation that remains normal in the Muslim lands . . . Christian clergy do not exercise or even claim the kind of public authority in most Muslim countries.”

This observation provides an insight into recent events in Egypt. After Mubarak fell, many believed that the secular democrats were on their way to creating a more democratic political order. But ensuing elections brought to power the Muslim Brothers, an Islamist organization that scorns democracy and Western notions of human rights as alien impositions preventing the creation of an Islamic social and political order based on sharia law.

When the deteriorating economy created frustration with the Muslim Brothers’ arrogance and ineptitude, mass protests sparked a military intervention that once again was interpreted as a rejection of the Brothers and sharia, and a yearning for liberal democracy. Our ideological stencil assumed that our secular goods of freedom and prosperity had trumped the religious goods of fidelity to Islam and its doctrines.

Yet it is not so clear that this is the case. Impatience with the Muslim Brothers’ inability to provide basic necessities and manage the economy, or anger at its heavy-handed tactics, do not necessarily entail rejection of the ultimate goal of a political-social order more consistent with Islamic law. Polling of Egyptians suggests that the general program of the Muslim Brothers is still supported even as their tactics and governing are rejected.

In a Pew survey earlier this year, 74 percent of Egyptians said they want sharia to be “the official law of the land,” and 55 percent said sharia should apply to non-Muslims, which in Egypt includes 15 million Christian Copts. An earlier survey from 2010 found more specific support for sharia law: 84 percent of Egyptians supported the death penalty for apostates, 82 percent supported stoning adulterers, 85 percent said Islam’s influence on politics is positive, 95 percent said that it is good that Islam plays a large role in politics, 59 percent identified with Islamic fundamentalists, 54 percent favored gender segregation in the workplace, 82 percent favored stoning adulterers, 77 percent favored whippings and cutting off the hands of thieves and robbers, 84 percent favored death for those leaving Islam, and 60 percent said that laws should strictly follow the teachings of the Koran.

These attitudes, consistent with the program of the Muslim Brothers, suggest that their opponents are angry not with their long-term goal of creating a more Islamized government, but with the Brothers’ abuse of power and their managerial incompetence that alienated the even more radically Islamist Nour party. As the Middle East analyst Reuel Marc Gerecht recently wrote, “Only the deluded, the naïve and the politically deceitful . . . can believe that Islamism’s ‘moment’ in Egypt has passed. More likely, it’s just having an interlude.”

These results will not surprise anyone who understands how profoundly religious beliefs determine Middle Eastern attitudes to politics and society. Rather than ignoring this widespread religiosity, or subordinating it to our own goods such as prosperity and personal freedom, or explaining away the patent illiberal and intolerant dimensions of this belief, as the dominant narratives continue to do, we should instead recognize and acknowledge the critical role of Islam in the violence and disorder rending this geopolitically strategic region. Only then can we craft a foreign policy that protects our security and interests.