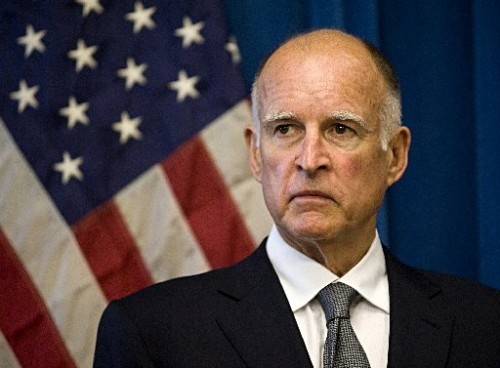 Last March, California Governor Jerry Brown declared that those who wished existing federal immigration law to be enforced — in the manner that would have saved the late Kate Steinle from a five-times deported, seven-times released felon illegal alien – were:

In California, if one assumes that the law as written should be followed, one is dubbed either a cave-dweller or an apostate. Meanwhile, sophisticated non-troglodytes in San Francisco have a sheriff — with a criminal record of his own — release a repeat felon and often-deported illegal alien, and that act is proof of his enlightenment.

Did Ms. Steinle rate any editorialization from the president or his administration in the manner of Trayvon Martin or Michael Brown? In all these cases, the allegation is that the state was culpable for the death of an innocent. But Ms. Steinle had no prior criminal record or brushes with the law, and was walking and not in a fight or in the process of being arrested, so therefore her death did not rise to the level of a Ferguson or Baltimore “teachable moment.”

Last week in Canada, the governor next turned his wrath on supposed “climate change deniers.” (Note the cheap moral equivalence between skepticism of man-made global warming and denial of the Holocaust.) He included them again in his growing categories of pre-civilized cave-dwellers. Brown scoffed to his more sophisticated Canadian audience:

We have a lot of troglodytes south of the [Canadian] border.

If one is both a “climate change denier,” and wanted someone like Francisco Lopez-Sanchez not to have been let into the U.S. unless he had met a background check and had waited in line for legal entrance, or at least was deported after his first felony, not his seventh, or at least was not let back in after his first deportation rather than his fifth, is he a troglodyte squared?

Aside from violating Churchill’s dictum that it is always unbecoming for a statesmen to ridicule his own citizens to foreigners while abroad, consider Brown’s weird logic and his own record as well.

Some of the state’s pillars of addressing climate change — Solyndra, the vast, expensive, and unimpressive cost-to-benefit (but quite impressive bird-killing) Mojave desert solar farm, and the planned corridor of the high-speed rail from Fresno to Corcoran — are assumed to be sophisticated and non-troglodyte. But completing a few of the once-scheduled California Water Project reservoirs would be Neanderthal.

Building a modest million-acre gravity-fed foot reservoir (had we started in Year One of this drought, it might have been finished by the present Year Four) would supply, at about the same cost, twenty timesthe annual water of the new southern California desalinization plant, without the daily “carbon footprint” of a huge electrical bill.

Insulting Americans as knuckle-draggers also makes no sense for a governor who, when he once presided over a 20 million-person state in the late 1970s, did much to cancel California’s planned infrastructure growth (“spaceship earth,” “smaller is better,” “era of limits,” etc.). He now presides over a 40 million-person state, mired in drought and short of canals, dams, reservoirs, and freeways.

If we cannot build reservoirs (although we might still should there be a Year Five of the drought, when the California Water Project and Hetch Hetchy prove inadequate to water the Bay Area corridor), can we at least not discharge to the sea millions of acre feet of stored water for purposes of (failed) fish restoration, for reasons never envisioned by the architects of the project? Those who wish to improve salmon runs are not just talking about redirecting reservoir water in northern California counties, but of recreating salmon runs in the San Joaquin River, something that few now alive have ever seen.

If sea temperatures rise this next autumn and if the familiar El Nino effect – well-known over the past decades — returns, and if we have a particularly wet and snowy winter, what will we then call the return of storms? Will that transition also be dubbed “climate change” because the weather in California became wetter and colder from a slight warming of a distant ocean?

Will Barack Obama fly back into Fresno amid heavy rains, and pronounce the end of the drought as the wage of climate change, in the way that he not long ago flew into Fresno to pronounce the persistence of the drought was the wage of climate change? Oceans that warm up cause snow in California; oceans that cool down cause drought and heat. When climate change is everything, is it anything? Is a slightly warmer phase in the Pacific Ocean bad or good, odd or normal, mysterious or completely understood? Is the present anti-El-Nino effect (i.e., slightly cooler oceanic temperatures) proof of anything? Too little global warming?

Language is a window on reality, as we learned when, in good Orwellian fashion, “illegal alien” transmogrified to “illegal immigrant” to “undocumented immigrant” to just “immigrant.” The South Korean doctor waiting in line for five years to get a legal green card became morally equivalent to the Latin American who crashed the border and then adopted an array of assumed identities. So too, once the planet did not heat up as expected over the last 17 years, “global warming” became “climate change.” Once climate change could entail both hot and cold spells, why not add in to the mix hurricanes, tsunamis, and tornadoes, and call it “climate chaos”?

Given the brief history of civilization and its incomplete record-keeping, especially in the New World, no one knows quite exactly what California’s weather is doing or why. We could be experiencing natural global warming that results in the same periodic spikes in temperatures as in the past in the age before machines — cycles that presumably were due to changes in solar activity or idiopathic causes still poorly understood. We could be entering a period of global cooling as we were warned about in the 1970s. We all remember our California high school science classes and the Newsweek scare-story articles of a new ice age. Or we really could be in an era of man-caused global warning, but one of only incremental change that will not have much dramatic effect on living things. We could be in an era of man-caused global warming that could soon deleteriously affect global life, but cannot much be moderated by even poverty-inducing change in Europe and the West, given the billions in Asia, India, China, Russia, and elsewhere who would prefer to survive first and worry about hotter weather second.

I think many of us fit the governor’s definition of troglodyte, but we also believe that, by a disinterested standard, both he and California are the true troglodytes.

After all, how does a state manage to achieve, all at once, the highest basket of gas, sales, and income taxes, yet rate nearly dead last in roads and highways, or school performance tests, and have the nation’s greatest number of billionaires, and one-sixth of America’s welfare recipients, and the largest percentage of any state population below the poverty line?

We troglodytes don’t believe that a municipal authority, even a self-important progressive city like San Francisco’s, can arbitrarily declare itself a “sanctuary city” immune from the federal government’s laws any more than the states of the Old Confederacy once declared federal law null and void in Georgia or Texas.

I don’t believe that contemporary Provo, Utah, could declare itself exempt from Supreme Court rulings on gay marriage, or federal statutes about gun registration. Are we to suspend federal law for causes we deem progressive, but not for those we don’t deem liberal?

We are not convinced by Gov. Brown’s postmodern vision of a borderless state, because we do not believe any of California’s elites would wish to be subject to the realities of their own ideologies. If the governor were younger with a family to support without capital and inheritance, and living in Tulare or Madera with his children in the public schools, his car commuting on the obsolete 99, reliant on occasional emergency room use or trips to DMV? Then, he might have thought it wiser to ask immigrants to arrive here legally, and in numbers that could be assimilated and integrated without huge social costs to the state’s middle and poorer classes.

Illegal immigrants are neither saints nor sinners, but they are usually desperately poor people without high school educations, money, legality, English, or an overriding sense of obeying all the laws and regulations of their hosts. And they arrive with personal histories and backgrounds completely unknown to authorities.

They need the host to help them assimilate and integrate and learn English, not to accentuate their identities that they presumably wished to discard when they had left Mexico.

They are collectively used as pawns by a variety of sanctimonious groups, who see them only as valuable as a collective but not so much as unique individuals with differing ideas and unpredictable beliefs.

Their champions are large businesses who want cheap labor at the expense of poor working Americans. Illegal immigrants serve the interests of Latino elite ethnic activists. Why, at this late age, do we still have, in Franco or Mussolini fashion, a “National Council of the Race (La Raza)”? They count on yearly influxes of desperately poor foreign nationals. Millions of illegal aliens ensure that the elite of Latino heritage can point to surveys that show Hispanics, as a group, show less income and education levels than other groups. That lack of parity thus provides arguments for why the state and federal governments should, as recompense, give preferential treatment in admissions and employment to U.S. citizens who happen to share the same ethnic profile of millions who entered the U.S. legally.

As Brown may have hinted with his use of “un-Christian,” the Catholic Church welcomes in illegal aliens, in a way that it would likely not if they were evangelicals or Mormons, especially in a state whose native-born church goers are demographically shrinking.

Mexico of course likes the idea of illegal immigration: 1) billions of dollars in remittances; 2) fewer poor to subsidize at home; 3) less social tensions in politically edgy provinces like Oaxaca; 4) a growing lobby of expatriates in the U.S.; 5) a psychological sense of payback to the Yanquis, as demography finally wins what war once lost.

So many of us are proud to be troglodytes. For a while longer we resist the liberal impulse that is now predicated on wealth, status, and influence ensuring exemption from one’s own grand theories that affect only the cave-dwelling.

17 thoughts on “Want Him to Enforce Laws That Would Have Kept Kate Steinle Alive? Governor Jerry Brown Thinks You’re a ‘Troglodyte’”