Despite the value of his open letter, he will become Obama’s scapegoat when the Iran negotiations inevitably fail. 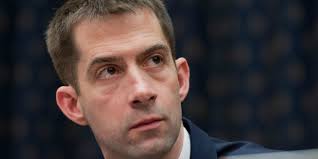 The snarky quip attributed to 19th-century French foreign minister Charles Maurice de Talleyrand — “It was worse than a crime; it was a blunder” — has recently been making the rounds to deride a letter written by Sen. Tom Cotton (R., Ark.) and signed by 46 other senators.

They wrote to the Iranian theocracy that any agreement on nuclear proliferation negotiated with President Obama will not constitutionally bind the next administration — unless it is properly ratified by Congress.

Democrats were outraged. They charged that Cotton’s letter is a crime, a violation of the 216-year-old Logan Act. That law bars unauthorized individuals from conducting negotiations with foreign governments.

Even some Republicans sighed that the letter was a political blunder. It supposedly plays into President Obama’s caricature of right-wing and obstructionist conservatives.

In fact, the letter was not a crime or a blunder.

Senators and House members have a long history of freelancing in foreign policy. Sometimes they do it wisely, sometimes stupidly.

Republican senators went to great lengths to undermine Woodrow Wilson’s utopian idea of a League of Nations. General Douglas MacArthur and House minority leader Joe Martin did their best to sabotage what they thought was the reckless policy of then-president Harry Truman concerning Korea and Formosa.

Democrats in Congress have been just as eager to warp administration foreign policy in claiming their co-equal part in government.

Secretary of State John Kerry is the most outraged of Cotton’s critics — and has the most notorious record of trying to undermine presidential foreign policy.

As a freshman senator, Kerry traveled to Nicaragua to show solidarity with “Comandante” Daniel Ortega — as a way of opposing then-president Reagan’s efforts to help the Contras in their resistance to the Sandinista Communist takeover. Two other Democrats, Senator Tom Harkin and House speaker Jim Wright, also met with Ortega.

Most unfortunate was House speaker Nancy Pelosi’s disastrous 2007 trip to Syria to meet with thuggish president Bashar al-Assad. At the time of their meeting, Assad was offering assistance to radical Islamic groups that were attacking U.S. troops in Iraq.

But was the Cotton letter a political “blunder”?

Obama’s “red lines” to Syria, the failed reset with Russia, the lead-from-behind mess in Libya, and the skedaddle from Iraq and Yemen have convinced the Iranians that Obama will predictably go soft in negotiations, or not expect compliance with any agreement he signs.

Obama’s estrangement from both Israel and the Arab Gulf states only further reminds the Iranians that American negotiators are not worried about their allies’ outrage over the proposed deal.

First designated as a sponsor of terrorism in 1984, Iran has been deemed by the State department to be the leading state sponsor of terrorism. It has openly threatened to destroy Israel. It sent operatives into Iraq to kill Americans. It has now carved out Shiite dependencies in Iraq, Lebanon, Syria, and Yemen.

Given all that, no sane American administration would trust the Iranians to give up their nuclear program. Instead, most presidents would have continued with tough economic sanctions — with even tougher embargoes to follow if the Iranians did not quit trying to make a bomb.

What Cotton and the senators have done is not criminal or stupid, but valuable both for the country and — ironically — for the Obama administration.

Obama is already mischaracterizing the letter to use it as a wedge with the Iranians. He seems to be reminding them that he is the only thing standing between them and the anti-Iranian hardliners in the U.S. senate. If Obama somehow manages to scare the Iranians into a treaty, he surely will not credit the senators for allowing him the leverage to play good cop to Senator Cotton’s bad cop.

More likely, the Munich-like agreement will fail in the face of outrageous Iranian demands and an even more outraged American public.

When it does, Obama will then blame Cotton and his Republican colleagues for undermining his doomed efforts. Such scapegoating is now old hat for Obama, who has blamed factors ranging from George W. Bush to tsunamis for his foreign policy and domestic failures.

Republicans, Democrats, and all Americans should thank Cotton for reminding the Iranians that under the U.S. Constitution, the Senate must ratify treaties with foreign powers. Cotton will get no credit if the Iranians get worried over his letter, relent and offer needed concessions.

But Cotton will endure plenty of blame if Iranian negotiators walk away in fury because a skeptical U.S. Senate would have to approve any sweetheart deal that they pulled over on Obama.

In other words, Cotton is not a blunderer — he is a classic lose/lose tragic hero.