Hope and Change was left behind long ago. 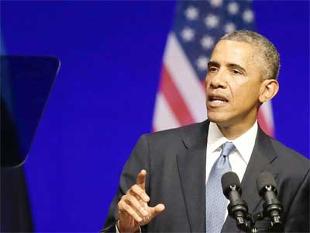 The public has come to know three Obamas. But which, if any, of these portraits is real, and which are fantasies?

I. Self-Portrait
Obama’s own judgment on his tenure is now all too clear: He saved us from another Great Depression, and he has made the United States more secure and more popular in the eyes of the world than we have been at any time in our recent history. Obama “ended two wars” (in the sense of pulling troops out of Iraq and steadily bringing them back from Afghanistan). According to Obama, America has never been more liked abroad, largely because his lead-from-behind policies have ended the image of the U.S. as bully. He hunted down and “got” Osama bin Laden. At last, an American president has crafted a comprehensive plan to navigate Iran away from nuclear-weapons acquisition. The Middle East is no longer defined as an obstreperous Israel and triangulating Gulf monarchies dominating American policy — on the basis of a “special relationship” in the former case, and the American need for oil in the latter. Europe has been weaned off dependence on the United States and, in tough-love fashion, is emerging from its past infantilization. Obama has isolated Putin and warned the Chinese about their rough elbows that cause tensions to flare. Obama ended the controversial “war on terror,” and, as a result of his inspired outreach to the Muslim community, there has been no repeat of 9/11.

At home, Obama saved the economy after the September 2008 financial meltdown, which he did through massive infusions of cash into the economy and by growing government to record levels. Unemployment is now low, and energy prices have declined. The government under Obama at last is behind climate-change legislation. The declining deficit is no longer at its customary $1 trillion in red ink. A new nationalized health system will extend coverage to millions of people who were previously uninsured. The president offers a balanced voice on racial tensions, and is seen as a valuable negotiator between the anger of minorities and the apprehensions of the majority. His administration has been largely scandal-free (in the sense that no major figure has yet been indicted). He has tried to solve the immigration problem by bringing millions “out of the shadows” through amnesties and promises of more. As the first African-American president and the first to win a Nobel Peace Prize, Obama will be remembered as an iconic leader. He certainly has refashioned the Democratic party and finally rebranded it as, first and foremost, a progressive movement aimed at ensuring social justice and equality.

II. The Majority Take
Obama has not polled a 50 percent positive rating in two years. George W. Bush is now more popular than Barack Obama. It is easy to see why. By the time Obama entered office the war in Iraq had already ended; the country was quiet, but in need of U.S. stewardship, in the manner of South Korea circa 1953–54. For the sake of a campaign talking point, Obama pulled out all American troops, Iraq sunk into chaos, and ISIS was birthed — an Islamic fascist movement that he deprecated as a “JV” team. He telegraphed his plans to leave Afghanistan, and its fate will likely be similar to Iraq’s. His false red lines in Syria, the bomb-and-run destruction of Libya, the Benghazi disaster, the needless estrangement from Israel, the alienation of the Gulf monarchies, and the courting of Iran by dropping sanctions and not insisting on full inspections as part of nuclear talks have all helped to demolish U.S. influence in the region, and contributed to the most unstable Middle East since World War II.

The U.S. is no more popular now than it was under past presidents. Euphemisms and outreach — such as the apology tour and the Cairo speech — had no effect on America’s image abroad. At home, there are constant efforts by Islamists to kill Americans — some broken up, some not, like the Boston Marathon bombing and the Fort Hood massacre. Obama trashed the Bush–Cheney anti-terrorism protocols, but then ended up adopting most of them as his own — his unique contribution being increasing about tenfold the out-of-sight, out-of-mind Predator-drone assassination attacks. Even our allies know that Iran will soon get the bomb — although perhaps, out of deference to their benefactor, the Iranians will wait to set off a nuclear device until Obama has left office. China is creating artificial atolls in the Pacific to expand its influence, and our smaller allies are increasingly faced with the unpalatable choice of begging the U.S. for the continuance of traditional security guarantees, offering China concessions, or going nuclear themselves. Putin was rewarded for going into Georgia with “reset,” and the result is the absorption of Crimea and part of Ukraine, with the Baltic states next. Lead from behind, empty red lines, rhetorical deadlines and step-over lines, reset, and pivot are all now recognized as synonyms for an American recessional.

Obama entered office four months after the financial panic, by which time all the major remedies were already in place and working. The recession ended six months into his term, as such downturns usually do after two or three years. Unlike the Clinton–Gingrich budget deal, Obama’s slashing defense and raising taxes resulted not in balanced budgets but in serial half-trillion-dollar deficits, given unchecked entitlement and other domestic spending. Only zero interest rates — which have punished the middle class and blessed Wall Street — have allowed Obama to service $7 trillion in additional debt, whose total is now nearing $19 trillion.

The U.S. has a bitter appointment ahead with draconian budget belt-tightening and entitlement reform. The private sector, through fracking and horizontal drilling, has brought America more gas and oil — despite, not because of, Obama, who stymied new oil leases on public lands, froze the Keystone pipeline, and talked down carbon fuels, only to take credit for falling gas prices. His green initiatives went nowhere, as even a Democratic Congress balked at cap-and-trade legislation. What was left was rhetorical Goreism and insider cronyism of the Solyndra brand. Obamacare — along with massive new borrowing, constant presidential jawboning against entrepreneurial success, and a labyrinth of new regulations — stalled the economy, which experienced negative growth last quarter, along with record rates of non-participation in the labor force and static family income. All the Affordable Care Act’s promises — reduced premiums and deductibles, individuals’ being able to keep their doctors and their health plans, radical cost-savings — proved empty, and were seen as empty through the president’s own pre-reelection suspension of many of the mandates. Obamacare will likely soon be quietly dismantled and replaced by a more free-market alternative.

Obama was neither a progressive crusader nor a neo-socialist who wrecked the country, but mostly a sad pretender going through the motions.

Obama resorted to illegal executive orders of just the sort that he himself once warned against. He destroyed border enforcement in a transparent scheme to alter the electoral demography of the American Southwest. Race relations have not been worse since the 1960s, as the firebrand Al Sharpton is a regular White House visitor, and both President Obama and Attorney General Eric Holder have spiked racial tensions through unnecessarily provocative editorializing on race. Hope and Change is not a legacy, but instead will be remembered as a cruel Pied Piper tune that led the masses over the cliff. Obama has wrecked the Democratic party, by losing both houses of Congress and ensuring that a large majority of state legislatures and governorships are firmly Republican. His second term will see no lasting achievement, other than a series of executive orders designed as much as anything to spite his opponents. The Obama presidency was a tragic failure.

III. Being There
A third view of Obama is neither so rosy as the first nor so melodramatic as the second. Obama may well have been an unapologetic progressive wolf in centrist clothing, but mostly he was a continuation of what he had been in the past: an unimpressive state legislator, a one-term partisan senator without any accomplishments, a lackadaisical executive who in his own words had to worry most about not appearing lazy and distracted. Obama as president simply pushed the right progressive buttons, all the more easily once his own party lost the Congress and he was freed to sign executive orders that enraged his enemies and moved the country leftward. He cares little about the scandals involving the IRS, VA, AP, NSA, GSA, TSA, EPA, Benghazi, and the Secret Service, other than ensuring that they stay far away from his own godhead.

Mostly, President Obama likes the ceremonial perks of his office — the public spotlight to pick sports winners, the regal access to the links in sporty golf attire, the huge plane and entourage, the video clips of his catlike descent down the stairs of Air Force One, and the captive audiences for his often ahistorical and confused ramblings about America’s past and present shortcomings. Rarely has a president entered office so inexperienced and unprepared, yet with such great hopes and expectations among the public. That he squandered such good will through petty spite and inexperience should not be surprising, given his meager qualifications and thin résumé. Most of Obama’s career in community organizing, academia, and the Illinois legislature was predicated on leveraging his race, name, and unique background with the pretensions of liberal America to land opportunities for which he knew in advance that he would never be held accountable.

Hence his presidency proved entirely predictable: Obama was neither a progressive crusader nor a neo-socialist who wrecked the country, but mostly a sad pretender going through the motions. The more that he kept silent and was not seen, the more the public liked the idea rather than the reality of Barack Obama.

Most readers will see elements of truth in all three Obamas. Portrait III, however, seems the most accurate — with the caveat that a listless and detached president can still achieve enormous change by outsourcing to legions of diehard progressive ideologues the implementation of his hazy notions of redistributionist social justice.

30 thoughts on “The Three Obamas”