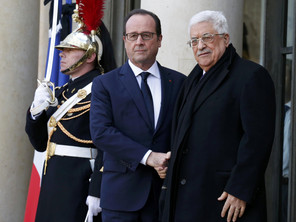 Commentators on both the left and the right are slamming President Obama for missing the march in Paris last Sunday. Even a stalwart courtier like CNN’s Jake Tapper sniffed that he was “ashamed” that the U.S. was represented by an ambassador––one, by the way, who got her appointment by bundling money for the president’s political campaigns. But who’s surprised at this latest display of diplomatic incompetence? This is the same president who gave the queen of England an I-Pod loaded with his speeches, banished a bust of Churchill from the White House, bowed low to the Saudi King, blew off Margaret Thatcher’s funeral, and insulted on an open mike the prime minister of Israel, our most important ally in the Middle East. Missing the march is just Obama being Obama.

More significant is the fact that these complaints are just distracting us from more important questions about the march. The first is, what took the French so long? In 2012, to take just one example, a jihadist killed 7 people, including 3 Jewish children, in Toulouse and Montauban. Why did those deaths not merit a large display of  “solidarity” and multicultural togetherness? Some will argue that the Charlie Hebdo killings deserve more attention because they struck at a foundational belief of liberal democracy, free speech. Indeed it did.

But killing Jewish children just because they are Jews strikes at equally foundational beliefs––that all people have human rights whatever their race or creed, and that confessional tolerance is mandatory for an open and free society. Yes, the latest massacre also killed 4 Jews just because they were Jews, but those victims of the violent assault on our principles have been an afterthought. Passionate proclamations of the importance of free speech? Heard a lot those. Equally passionate calls to fight anti-Semitism? Not so much. Perhaps some people have some residual decency, and are embarrassed at being reminded that just 6 months ago, these same streets of Paris were filled with protestors marching in support of Hamas, vandalizing synagogues, and shouting anti-Semitic and genocidal slogans.

So there is a fair amount of hypocrisy in such calls for free speech and tolerance, coming as they do from the same people who institute “hate speech” codes against the critics of Islam, and who brand as “Islamophobes,” and “xenophobes,” and “neo-fascists” those political parties that call for a renewed commitment to Western civilization, and take pride in the culture that created human rights, democracy, tolerance, and all the other goods the scorners of national and cultural pride take for granted. Hence Bernard Henry-Levy snidely dismisses as “arsonists of the soul” those parties that call for patriotism and pride in their culture, and the need to defend it from the enemies that want to destroy it. So much for Henry-Levy’s cries for “national unity,” an invitation apparently valid only for those who endorse the flabby “tolerance” and multicultural fantasies that have enabled the illiberal, homophobic, misogynistic, and lethally intolerant jihadists shedding blood in the streets of Paris.

One suspects that the outcry reflects anger not so much at those who murder innocents in order to destroy liberal democracy and human rights, but at these particular killers who dared to slaughter left-wing journalists in what François Hollande laughably called the “capital of the world.” One wonders what the response would have been had the same number of people been murdered in a National Front office out in the sticks. It’s the arrogant provincialism of the has-been great power, the Gallic version of that old New Yorker cover showing the U.S. as a vast wasteland west of the East River. Killing Jews or cops in the provinces is one thing, but left-wing journalists in the City of Lights? Now that’s a cause for outrage. Roger Kimball got it right when he wrote, “The whole production is slightly nauseating in its fakeness, its self-aggrandizing narcissism, and its essential mendacity.”

Mahmoud Abbas, participating with other heads of state in an event supposedly memorializing victims who include 4 Jews killed by jihadists. But Abbas is not a “head of state.” He is the “chairman” of a terrorist gang called the Palestinian Liberation Organization, a member of another terrorist outfit, Fatah, and a holocaust denier. Since 1993 he has headed up the Palestinian Authority, that Potemkin “government” behind which for 20 years now he and his cronies have incited hatred against Jews in Arab Palestinian popular culture and schools, brutally suppressed political rivals, fleeced the West of funds that arm soldiers and line the pockets of the PA’s “leaders” ($100 million just for Abbas), and serially engineered terrorist murders of Israelis, over 1500 since Oslo handed control of Judaea and Samaria to the Palestinians.

So a “leader” whose whole life has been committed to the destruction of Jews and their national homeland, who has colluded in terrorist murder, who regularly praises murderers of Israelis as “martyrs” and names schools after them, and who has rejected offers of the nation that he tells gullible Westerners is people’s purpose of their violence––this man who embodies everything opposed to the liberal democratic principles of Western civilization is invited to march in a celebration of those principles? A “leader” who arrests and tortures journalists marches in support of free speech? A killer of Jews attends a memorial in which Jews have been killed? But what should we expect when nations forged by Western principles have sunk so low that they make a terrorist gang a member of U.N. institutions––with the approval of France, remember–– and the International Criminal Court, one of whose charges is to prosecute genocide and war crimes like randomly firing rockets into cities. You have to go back to the bloodstained Soviet judges sitting on the Nuremberg Tribunal to find such absurd hypocrisy.

The rot in the West, its failure of cultural nerve and collapse of civilizational morale, will not be stopped by big talk and displays of communal emotion. To quote Churchill’s words in response to the Munich debacle, “This is only the first sip, the first foretaste of a bitter cup which will be proffered to us year by year unless by a supreme recovery of moral health and martial vigour, we arise again and take our stand for freedom as in olden time.” And that “stand” will require more than just words and marches.

5 thoughts on “The Real Scandals of the Paris March”