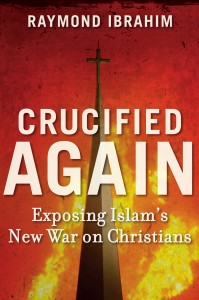 Last November Raymond Ibrahim was interviewed by Egyptian reporter Sherif Awad.  The interview appeared in several Egyptian magazines and websites, as well as American ones, such as the Westchester Guardian.  The interview follows:

Ibrahim: My father and mother, both Copts, one from Cairo the other Alexandria, left Egypt in the late 1960s for America, where I was born.  They left Egypt for a better life.  I grew up speaking both Arabic and English and visited Egypt with my parents often when I was young.  It was natural, then, for me formally to study the region, its languages (primarily Arabic, which I already spoke), its history and conflicts, in college.  Growing up in Egypt in the 1940s-1960s, my parents experienced little by way of direct persecution, but they did experience religious discrimination, and that was one of the reasons they came to America, for better opportunities.

Awad: In regards to your MA thesis and book about the Battle of Yarmuk, can you compare its events to the happenings that led to the ending of Islamic rule in Andalusia? Do you consider researching the Islamic empire in Andalusia? About the Crusades?

Ibrahim: Yes, I am very interested in early and medieval Islamic history, especially military history vis-à-vis Christendom.  Not only are there parallels between those various battles and encounters, but indeed, the patterns continue to this very day.  Most in the West are wholly unaware that to Islamist groups like al-Qaeda, they see the conflict as a continuum of history—as jihadis (mujahidin) fighting infidel “crusaders.”  This is precisely why I have an interest in the long history of the conflict—most of which is concealed from people in the West by the forces of “political correctness,” which predominate in the classrooms, the government, and the media.

Awad: You researched al-Qaeda’s early history but I want to ask about 9/11 and how far al-Qaeda was involved, because many conspiracy theorists claim that certain US entities have something to do with those events.

Ibrahim: Well, of course, conspiracy theorists say what they say.  And for my part, I can’t prove anything; we work with the information we are given, ultimately.  For example, we were told that Osama bin Laden was killed; but others say he wasn’t.  And no one can really proveeither position (since his body was purportedly and hurriedly dropped in the ocean).  So, while I do not necessarily discount what are sneeringly dismissed as “conspiracy theories,” in this profession, one must articulate one’s position within the reasonable bounds of what is collectively deemed “truth.”

Awad: In your book Crucified Again, you shed light on the troubles faced by the Christian minorities across the Arab world. It was followed by new articles about the attack on the church of Waraq neighborhood in Cairo (which is next to my house in KitKat by the way). Do you differentiate between tolerance and fundamentalism in Islam or do you think that Islam is broadly violent right now?

Ibrahim: This is a good, important, and ultimately complicated question.  To be brief: I always distinguish between Muslims, the humans, and Islam, the religion.  Muslims, like all humans, are free agents who are capable of doing anything; they, like all people, can be tolerant or they can be intolerant.  Likewise, they, like all peoples of all religions, can interpret their religion anyway they want (or simply ignore its tenets).  That said, when it comes to the actual religion of Islam, it is inaccurate to describe it as “tolerant” of non-Muslims—certainly not by modern, 21stcentury standards.  Plain and simple, Islam teaches that non-Muslims are inferior to Muslims.  Quran 9:29 calls on Muslims to subjugate the People of the Book (ahl al-kitab), until they pay jizya while feeling humiliated.  The prophet of Islam commanded Muslims not to greet non-Muslims and to push them to the side of the road.  One can go on and on with examples (see my book Crucified Again for many more with complete documentation).  Ultimately, this suggests that the pious Muslim who tries to follow the Sharia will be more intolerant of non-Muslims than the casual or “cultural” Muslim—and both types exist.

Awad: How do you see the rise and fall of ex-president Morsi and the Muslim Brotherhood (MB) in Egypt? Do you think Egypt will be under more terrorist attacks from their supporters in the future? How do you see Egypt in the near future?

Ibrahim: Again, good and complicated question.  I actually think it was good that Morsi won elections and that the Brotherhood was temporarily empowered.  Because finally, the Egyptian people experienced what it would be like under ikhwani [Brotherhood] rule.  And the result of that was the June 30 Revolution—millions of Egyptians protesting in the streets.  So the good news is that Egyptians now know exactly who the Brotherhood is.  On the other hand, the Brotherhood still has supporters in Egypt, and more importantly, abroad—U.S., Qatar, Turkey, etc.  So it is likely that they will still try to undermine Egypt, whether through terrorism or political maneuvers from their supporters.  But overall I believe that Egypt’s experiences under the Brotherhood, and now after their ousting, have opened many eyes, thus ultimately weakening the Brotherhood’s influence.

Awad: In a recent article, you quoted the report published in al-Watan newspaper about Muslim Brotherhood in the US. Do you think MB have influences on Obama’s administration?

Yes, I do.  It is well known that several people who advise or associate with Obama, the White House, and in fact the entire U.S. government are somehow or other associated with the Muslim Brotherhood.  Moreover, since the June 30 Revolution, we have seen, repeatedly, how the Obama administration and U.S. leadership—including Anne Patterson, John McCain, and Lindsay Graham—have intervened on behalf of the Brotherhood.