Multi-billionaire Oprah Winfrey, after her surreal $38,000 handbag “racism” encounter in Switzerland, has just weighed in again on race and the presidency, as yet the nth way of hyping her new film: “There’s a level of disrespect for the office that occurs. And that occurs in some cases and maybe even many cases because he’s African American. There’s no question about that and it’s the kind of thing nobody ever says but everybody’s thinking it.” 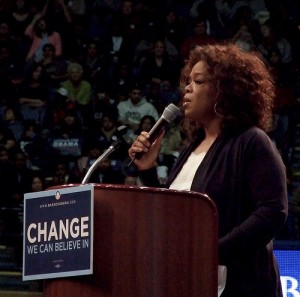 Nobody ever says? Has she read a newspaper columnist or turned on MSNBC lately?

Aside from her historical ignorance, Oprah Winfrey has increasingly turned to the race card to explain the president’s plummeting polls. In her race-obsessed world, Syria, Benghazi, the NSA, IRS, AP, and ACA messes do not explain why a reelected president crashes from a recent 60 percent approval rating to less than 40 percent in less than a year.

Instead, in Oprah’s no-win, racialist world, to the degree that Obama is popular, Americans are considered for the time being as not racist; to the degree that he is not, the country suddenly is collectively under suspicion (e.g., “everybody’s thinking it”).

That Obama might be utterly inexperienced in the manner of Jimmy Carter, less than veracious in the manner of the impeached Bill Clinton, or suffering the same second-term blues of Ronald Reagan during Iran-Contra or popularity crash of George W. Bush after Katrina simply cannot for Oprah be true of an African-American president, who for some reason must not suffer the same fate and treatment as almost all who have held the highest office. Instead, in this raciallyobsessed world of Oprah, that Obama is faring no different from his predecessors is now the country’s fault. And as remedy, he must be given deference if the country wishes to avoid the latest therapeutic rant from Oprah.

In fact, Oprah has no record of worrying about the level of disrespect shown the office. If she did, she might have said something a few years ago when her president was routinely being compared to a Nazi, and often by her own fellow celebrities, writers, politicians, civil-rights activists, and filmmakers. That she said nothing then, but now says a lot, explains not America’s problem with race, but her own race obsessions, which have blinded her to her own prejudices and hypocrisies.

I don’t recall Oprah objecting when Bush was routinely shouted down. Did she deplore Al Gore calling the Bush team “digital brownshirts”? Or maybe John Glenn invoking the Nazis (“It’s the old Hitler business”) to talk about her president? Nor do I remember her weighing in on Linda Ronstadt’s claim that the Bush administration was “a new bunch of Hitlers.” Harry Belafonte and Julian Bond both routinely labeled their conservative opponents as little more than Nazis or KKK racists. Nor did Oprah note that “there’s a level of disrespect for the office that occurs” when Barbra Streisand compared Bush to Hermann Goering. Was she worried when Alfred A. Knopf published a novel about musing how to kill Bush? Or by a prize-winning docudrama film imagining the killing of Bush? What was her reaction a New York play, “I’m Gonna Kill the President,” was produced? Did Oprah once give a similar BBC interview about the office of the president and disrespect shown it in 2004 when a guest columnist in the Guardian, Charles Brooker, wrote: “On November 2, the entire civilised world will be praying, praying Bush loses. And Sod’s law dictates he’ll probably win, thereby disproving the existence of God once and for all. The world will endure four more years of idiocy, arrogance and unwarranted bloodshed, with no benevolent deity to watch over and save us. John Wilkes Booth, Lee Harvey Oswald, John Hinckley Jr. — where are you now that we need you?”

What might explain her outrage now about criticism shown Obama, but silence just recently when abject hatred and dreams of violence were voiced against her president? That answer may explain a lot about what Oprah has become.