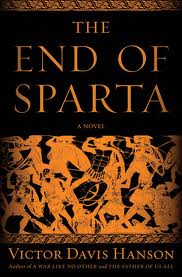 Classicists should infuriate other humanists, in the way that the handsome scholar-athlete who volunteers to help dyslexic children and is a genuinely nice guy should infuriate the guy who just made it onto the football team and has a hard time keeping up his GPA, or the kid with the great GPA who can’t do a pull-up—but they don’t hate him, because he’s just so good. That, at least, is how this historian feels whenever he reads a classicist.

These feelings of bitter self-recrimination are a normal part of the intellectual life, according to most intellectuals, but especially strong within me because I have just finished Victor Davis Hanson’s The End of Sparta, first published in 2011 and issued in paperback this spring. It was an absolutely infuriating experience. Isn’t enough for Hanson to have conceived of a genuinely original theory for the development of classical Greece? Can’t he be satisfied with roiling the waters of military history with his arguments for a “western way of war”? Doesn’t he realize that publishing a book a year is a little … excessive, particularly when he is still working on the family farm in the Central Valley of California? And then he has to go and write a novel; which, worst of all, is really pretty good.

It used to be that academics, at least the Oxbridge variety, when writing novels in their spare time would confine themselves to mysteries, which appeared under a pseudonym. J. R. R. Tolkein transgressed that unwritten code by writing a massive work of literature that he took far too seriously, so far as his fellow dons were concerned, and which had far too much of his own learning and preoccupations within it. It was one thing to simultaneously slum and show one’s cleverness by writing locked room puzzles; to take one’s literature seriously was not the done thing.

Hanson’s novel arises from the problem that classicists and medievalists so often have: a lack of evidence. In his study The Soul of Battle, focusing upon democratic generals engaged in wars of liberation, Hanson devoted a chapter to the Theban general Epaminondas, and there wrote just about as much as it possible to write of this mysterious man. Subsequent Greeks and Romans thought Epaminondas to be the greatest man of the ancient world, but his biographies—including the life that Plutarch wrote—are lost, or fragmentary. What is known is that Epaminondas was a Pythagorean, a devotee of the secret wisdom of that mythic figure; that he was elected general by the Boetian Confederacy, whose chief city was Epaminondas’ native Thebes; that he was dedicated to the abolition of slavery throughout Greece, and to the ending of Spartan hegemony over other Greek cities and states; and that he destroyed Sparta’s power in a series of brilliant battles and campaigns over the period of a decade.

In the many gaping holes of this epic tale Hanson plants the seeds of his story, there growing all the preoccupations of his scholarly career. The protagonist, Melôn, is a Boetian farmer, an independent man with slaves, the type of Greek that Hanson has argued was much more fundamental in establishing Greek democracy and civilization than urban-dwellers, as in Athens. Melôn’s farm is a marvel of permaculture, designed to take advantage of nature’s harmonies. Terraced into the side of Mount Helikon—where the Muses lived and gave Hesiod the farmer the gift of poetry as he tended his sheep—is the farm that Melôn inherited from his formidable father, who had homesteaded the land.

The lower terraces are seeded with grain. Farther up the mountain, catching the heat of the sun, are the terraces of grapes, from which wine and raisins are both taken (Hanson is himself a raisin farmer). Yet farther up, where the soil is rocky and poor for grain and vines, are the olive trees, from which comes all else needful for the life in the Mediterranean, not least of which was light from the oil. Like all farmers, Melôn continually tinkers with his agrarian paradise, tearing down and improving, building new, trying again to do things in a slightly better way. Through Melôn’s farm, as through all farms, runs the boundary between nature and culture. For Hanson, author of two elegies for the ending of the culture of American family farming, Melôn and farmers like him created Western civilization in the crucible of the constant give and take between nature and culture.

Yet the story does not begin upon the farm, but on the eve of the Battle of Leuktra, where Epaminondas led the Boetian Confederacy against the best soldiers of Sparta and its Peloponnesian allies. In the first chapters Hanson skillfully depicts the mustering of Greek citizen-soldiers, the eve of the battle—and then, the clash of arms, about which he has had so much to say in his scholarly works. Spears reaching forward to pierce neck, or groin; men falling wounded to be trampled to death by the ranks of friends and neighbors pressing behind them; the smash of shield on shield, and of shield on skull; the moment when swords are drawn, and the phalanxes disintegrate; the death of kings and of captains, and the shouting of victory and defeat.

This is not rendered in the staccato prose of a thriller, which these days seems to be most strongly influenced by the editing of Ridley Scott or the over-caffeinated Michael Bay; there are no explosions of olive oil bombs in Hanson’s book. Hanson’s prose is deeply affected—but not affectedly so—by his reading as a classicist. From time to time he delivers a sentence that is a rescanned, reimagined line from Homer, but he does not burden us with these. He does not try to create a faux-Homeric style. But neither do his characters converse like 20th-century people, as do so many protagonists of even the better historical novels; they have neither the language, nor, more important, the sensibilities that allow them to talk in a way outside their own time.

Nor does Hanson choose to focus on the doings of the great and famous. True, they appear—Epaminondas himself, of course, but also Plato and the future Phillip II of Macedon—but only because of historical plausibility. They are not making appearances in order to comfort the reader by providing them with a name with whom they are familiar, a familiar piece of furniture in a strange room. Hanson’s focus is always upon Melôn, but also upon others from the farm on Mount Helikon, particularly Melôn’s three slaves: Gorgos, a former Spartan Helot who prefers being a slave to noble and vicious Spartans rather than to democratic and agrarian Boetians; Chiôn, purchased as a child, now grown to Herculean strength, who fights alongside his master at Leuktra and gains his freedom; and Neto, a prophetess now more devoted to the mysticism of Pythagoras than her skeptical owner, whose prophecy that Melôn will kill the King of Sparta brings him reluctantly to the field at Leuktra.

The result is that this story is strange and otherworldly, more so than a fantasy novel that is a half-baked, badly digested, pseudo-faux semi-allegory of the present; and yet at the same time it is familiar. This is, I think, Hanson’s overriding intent, and his greatest achievement in this novel. Historians strive their entire career to make the past intelligible, and yet also preserve the sense of distance from the present to that past. This is what Hanson does in The End of Sparta.

Al Zambone lives in southern New Jersey, where he practices history at night, and education reform during the day.