So far in the Syrian charade, Bashar Assad has won de facto permission to be a legitimate ruler negotiating with superpowers, while promising to kill thousands more by blowing them up, shelling them, and shooting them without “obscene” chemical weapons. 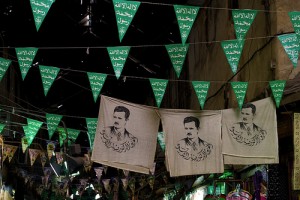 Vladimir Putin controls the tempo of the crisis. He now issues new initiatives, now delays for consultations and retrospection — as he steps up profitable arms shipments to the Syrians and Iranians. In short, he is in the short-term “saving” Obama from himself, while in the long term insidiously destroying presidential credibility, influence, and respect by the sheer force of his cunning and audacity, as Obama in terms of foreign influence curls up into a veritable fetal position and wishes it would all just go away.

So Obama for now is relieved. He can say that his saber-rattling stopped further use of WMDs and let others sort out the truth that 99 percent of the killing, past, present, and future, does not require the agency of chemical and biological weapons. He can sorta threaten Assad “to comply,” boast about the U.S. “reserving the right to use force,” promise support for the insurgents without really defining who they are, “consult” with Congress — and golf in peace.

The White House spin doctors and the usual crowd in the media can insist that only the threat of force brought Assad to the table, but will offer no answers about whether Assad is still supposed “to leave,” or exactly who in the insurgency we prefer and help, or how long and under what conditions we are to negotiate to dismantle Assad’s stockpiles (a truce to let U.N. inspectors — largely American and Russian? — drive U.N.-insignia Range Rovers about Syria with Assad’s minders?). We will hear daily of  ”Iraq” and “Bush.”

What’s in the future?

Perhaps in a few weeks or months there will be another mysterious WMD attack just to red-line Mr. Obama. We may have three to four more melodramatic crises to go between Obama, Putin, the U.S. Congress, and our allies, as we repeat the charade of threatening unbelievably small attacks and shots across the bow that are not pinpricks in a noble cause to stop WMDs from killing another 1 percent of the next 100,000 to die.

John Kerry’s longer and louder pontifications will be relegated to the status of Obama’s “make no mistake about it” and “let me be perfectly clear,” and he may join Hillary in retirement, but without her sort of boast that “we came, we saw, Assad died.” And we will muddle on, clinging to the hope that the Russians, Iranians, North Koreans, Chinese, and various terrorist groups do not assume this administration is synonymous with 70 years of bipartisan foreign policy.

How long will this go on? Probably until election time 2014, and then things might change, and in ways we scarcely can imagine.