If you’re hip and liberal, your kids don’t have to go to school with the gardener’s kids.

Strip away the veneer of Silicon Valley, and it is mostly a paradox. Almost nothing is what it is professed to be. Ostensibly, communities like Menlo Park and Palo Alto are elite enclaves, where power couples can easily make $300,000 to $700,000 a year as mid-level 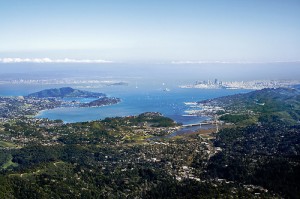 But often these 1 percenter communities are façades of sorts. Beneath veneers of high-end living, there are lives of quiet 1-percent desperation. With new federal and California tax hikes, aggregate income-tax rates on dot.commers can easily exceed 50 percent of their gross income. And hip California 1 percenters do not enjoy superb roads and schools or a low-crime state in exchange for forking over half their income.

Housing gobbles much of the rest of their pay. A 1,300-square-foot cottage in Mountain View or Atherton can easily sell for $1.5 million, leaving the owners paying $5,000 to $6,000 on their mortgage and another $1,500 to $2,000 in property taxes each month. Add in the de rigueur Mercedes, BMW, or Lexus and the private-school tuition, and the apparently affluent turn out to have not all that much disposable income. A visitor from Mars might look at their relatively tiny houses, frenzied go-getter lifestyle, and leased BMWs, and deem them no better off materially than middle-class state employees three hours away in supposedly dismal Merced, who earn 20 percent as much, but live in a home twice as large, with only 10 percent of the monthly mortgage and tax costs.

Given exorbitant taxes and housing prices, obviously it is not just the high salaries that draw so many to the San Francisco Bay Area. The “ambiance” of year-round temperate weather, the collective confidence rippling out from new technology, the spinoff from great universities like UC Berkeley and Stanford, and the hip culture of fine eating and entertainment all tend to convince Silicon Valley denizens that they are enviable even though they must work long hours to pay high taxes and to buy tiny and often old homes.

Silicon Valley liberal politics are equally paradoxical, reflect this quiet desperation, and mask hyper-self-interest, old-fashioned rat-race competition, and 21st-century suburban versions of keeping up with the Joneses. The latter may be green, support gay marriage, and oppose restrictions on abortion, but they still are the Joneses of old who define their success by showing off to neighbors what they have, whether high-performance cars or hyper-achieving kids.

In the South Bay counties, Democratic registration outnumbers Republican often 2 to 1. If liberals like Barbara Boxer, Dianne Feinstein, and Nancy Pelosi did not represent the Bay Area, others like them would have to be invented. Yet, most Northern California liberal politics are abstractions that apparently provide some sort of psychological compensation for otherwise living lives that are illiberal to the core.

Take K–12 schools. Currently, there is a stampede to enroll students in upscale private academies — often at $30,000 a year. That seems strange, when local public high schools like Menlo-Atherton, Woodside, and Palo Alto were traditionally among the highest-ranked campuses in an otherwise dismal state public-school system.

But things have changed — or at least are perceived to have changed. About 25 percent of the Silicon Valley population is now Hispanic, representing a huge influx of service employees — to work in hotels and restaurants, as nannies and housecleaners, in landscaping and construction — and their presence has expanded beyond the old barrios of San Jose and Redwood City.

The result is that Silicon Valley liberals are apparently worried about the public schools, given that second-generation Hispanics are perceived to be disproportionately represented in statistics on gang activity, illegitimacy, and high-school dropout rates. In crude terms, would a Google executive really wish his child’s hard-driving college-prep curriculum or enlightened social calendar altered somewhat to accommodate second-language teenagers whose parents recently arrived illegally from Oaxaca?

Something similar happened in the Deep South in the 1960s, when court-mandated integration brought black students into formerly all-white enclaves, spurring a white flight to private academies. Upscale hip whites and Asians in Northern California, of course, do not have southern twangs and in theory are multiculturalists to the core. But they are no more invested in a truly diverse public-school experience for their children than southern separatists of the past.

When I suggest to my Silicon Valley friends that their fixation on academic achievement is misplaced and that the academic peer and institutional pressure that my own children might have lost out on by going to the almost exclusively Mexican and Mexican-American public schools of southern Fresno County was balanced by the “life experiences” of dealing with those of all classes, races, and attitudes, they think I am unhinged. Diversity, in other words, is a cosmic ideal of voting for Barack Obama, not a cross that a Stanford-bound kindergartener must bear in the here and now.

The same contradictions define the material world. Those who live in the Bay Area are preponderantly greens — predictably opposed to logging in the Sierras, fracking and horizontal drilling in California’s newly discovered vast oil and gas reserves, and more dams and canals to ensure the continuance of irrigated acreage in California’s vast latifundia. Yet when I drive by the near-nonstop remodeling of older cottages, workers are taking out 1960s-era Formica counters and bringing in granite, or ripping out carpet and laying exotic wood floors. A knot-free redwood deck is still as popular as arugula from Whole Foods. Apparently, somewhere far to the south of San Jose, far to the north of San Francisco, or east of the mountains, a few trees are still being cut, a few quarries still being mined, and a few farms still being watered.

In the southern and central California coastal strip, where year-round daytime temperatures tend to range between 60 and 80 degrees, air conditioning is often unnecessary. Heating is only a 90-days-a-year cost. Power bills are a fraction of those in Stockton or Bakersfield, and therefore cheap natural-gas-fed power generation is mostly an irrelevant issue. That California has the highest electricity rates in the nation, with all sorts of redistributive and green charges that have nothing to do with power generation, does not matter much to those whose bills are less than half those of people living in the interior.

Crass materialism can be defined in lots of ways. In the Reagan years, the caricature was the Wall Street con artist with the “Beamer.” Yet I recently parked in the faculty A lot at Stanford University and counted the first 18 cars next to my Honda. Here was the tally: BMW five, Mercedes three, Lexus three, Volvo two, Honda three, Toyota two. Not one American car, and only five less than $60,000 in price. I assume that someone quite liberal is paying quite a bit out of a retrograde desire for the right logo or desired emblem, rather than a green mpg rate and basic dependable transportation.

There are few new tract-housing developments going in from San Francisco to San Jose. Residential construction is mostly upscale remodeling. Yet in terms of available acreage for new housing, there are vast swaths of open spaces in the Silicon Valley environs. The Freeway 280 corridor from Los Altos to San Francisco is still wide open, and so in many places is the land for 20 miles westward to the Pacific Ocean.

Yet there is no liberal movement for “affordable housing” for hundreds of thousands of Latino service workers who are often living in garages, sheds, and trailers from Redwood City to San Jose. There are no community leaders in Menlo Park or Atherton who lobby to build affordable condos along the foothill freeways, where water, power, and transportation are readily accessible, that might better serve the new Latino population.

Ask a Silicon Valley liberal whether he is for amnesty, open borders, and multicultural curricula, and he assents; ask him next whether he is for new low-income and diverse housing construction a few minutes from Menlo Park or Atherton, and he is aghast. I think the average Bay Area liberal believes his nanny flies home to Oaxaca each evening and is back by the next morning at the Hillsborough doorstep.

Among the movers and shakers in Silicon Valley, there is no apparent inclination to insist on having their gadgets manufactured here in America to provide jobs for the unemployed. But Silicon Valley zillionaires apparently support President Obama’s efforts to raise taxes, grow government, and provide more entitlements and services — at least if their inordinate donations to his two campaigns are any indication.

In fact, companies like Apple and Google have sought to avoid billions of dollars in taxes on overseas profits, and have liberally used offshore tax havens to lower tax liability in a manner that we are supposed to associate with less hip, more old-fashioned corporations. “Google as tax cheat” seems an oxymoron.

Cool is at the heart of the Silicon Valley. It is the lubricant that oils all the grinding contradictions. With the right zip code and the million-dollar-plus mortgage, perhaps you really are not living in a tiny, half-century-old bungalow. Mouthing diversity shibboleths means that you are not a white-flighter from the public schools. Techies don’t really offshore their profits or connive to avoid tax liabilities. Wearing loafers, jeans, and an earring or a slightly exposed tattoo means stock options and hedge funds don’t quite option or hedge.

California is the epicenter of the new regressive progressive — a novel sort of hyper-reactionary but hip 1 percenter who shakes his fist at his image in the mirror.