Plus some thoughts on Michael Walsh’s The Devil’s Pleasure Palace, and the damage inflicted upon American culture by the Frankfurt School. 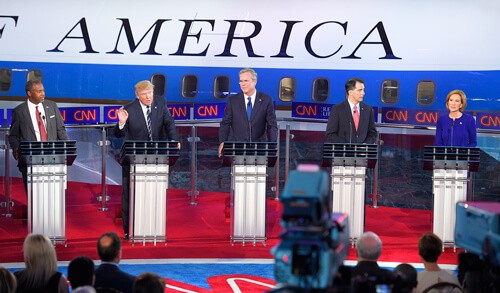 We don’t know yet what issue will end up driving the autumn phase of the 2016 election. In 2008 a hectoring Obama thought it would always be Iraq — an issue that he had scrubbed from his website by mid-2008 when the surge had rendered his anti-war traction irrelevant.

Instead, the key moment was not the war, but the sudden Lehman Brothers meltdown — and the herky-jerky McCain reaction to it, coupled with Obama’s monotonous “Bush did it” blame-gaming of the crashing stock market. Before September 14, 2008, John McCain and Sarah Palin were consistently up over the supposedly transformational first African-American president by anywhere from 2 to 4 points; afterwards it was steadily downhill.

No one knows what will happen to the economy in the fall of 2016, much less what North Korea, Iran, Putin or ISIS will be doing. If nothing, Democrats benefit; if something, not so much. Obama last week reminded us of the rules of media and progressive politics for 2016: he announced that critics of his presidency were de facto unpatriotic — apparently in the same manner that as a presidential candidate in 2008 he slurred a sitting president as unpatriotic. No one even noticed.

2008 was the first orphaned election since 1952. When an incumbent president or vice president does not run, things are wide open, and often favor the out-party. Unless Joe Biden jumps in, 2016 could be another.

We have not elected a non-politician since 1952; sixty-four years is a long time and suggests why it is a wise tradition. So far even on their best days, Ben Carson, Carly Fiorina, and Donald Trump are no Gen. Eisenhowers. Maybe we aren’t overdue for someone new.

Unspoken are the majority/minority dynamics. Barack Obama’s community organizing has bequeathed a new election calculus. It goes like this: how much Democratic racial mongering and divisive identity politics is necessary to persuade minorities to (1) continue to turn out in record numbers, (2) vote in bloc fashion (e.g., 70% for Latinos and Asians, 95% for blacks), and (3) keep voting for a liberal old white guy or woman without Obama on the ticket, (4) without turning off the so-called Democratic share of the white vote down to levels around 35%.

Whites only make up about 72% of the voting electorate; it is also equally valid that, thanks to Obama, the shrinking Democratic share of that vote is reaching 1980s Reagan-era levels. So there are two Obama legacies, not one, in the 2016 race. Democrats must pick up a few percentage points of white voters lost to their pandering in order to make up for a few minority percentage points lost without Obama on ticket. Second, Obama’s legions of loyal minority voters must register, turn out, and vote in mass for Hillary or Joe Biden in the fashion that they did for Obama.

It is iffy to calibrate debate performance with candidate viability. A bad night of repartee and verbal gymnastics can sink a descending candidate but not do much harm to a frontrunner. But three or four dismal performances in a row are quite a different story, given that there are 12 scheduled debates. Give Trump a flat last hour of tedious “tremendous,” “awesome,” and “great” in a 3-hour marathon debate, and who cares? Give him a flat hour month after month, and he wears on us.

In general, when a party has weak candidates — cf. the Republicans in 2012 — lots of debates are lethal: Herman Cain of the last debate really was Herman Cain of the first. But when there are strong choices, as in 2016, debates rev up interest. The Democrats are wise to have just six debates; Hillary versus socialism will wear after three outings.

After two debates, and not a single primary, here’s an aphorism for each of the Republican candidates:

Carson: Is rooting for him to speak more loudly and perk up a good or bad sign?

Christie: How can one so informed, energetic, bold, and glib so soon become so irksome?

Cruz: Is it good to have a candidate whom you would prefer to be a high judge?

Graham: There is a reason for his candidacy, but no one has discovered it yet.

Huckabee: Would that his noble creed be inductively inferred rather than deductively applied.

Fiorina: Witty, sharp, informed, and bold in debate — so what’s next?

Jindal: Never can one learn in such a short time so many things from just one man — and regret the valuable experience so much.

Kasich: One can be impressed with his sobriety and judiciousness if only he is permitted to read rather than hear it.

Pataki: Is he running for secretary of Commerce?

Paul: Quirky smart, and a quirkier speaker — and always just a quirk away from scary.

Rubio: The best argument for the lack of political experience not mattering.

Santorum: If only we really could go back to the wonderful 1950s!

Trump: A transient and guilty pleasure like a double martini that may kill you if continued.

Walker: A noble reminder of why we liked the sheriff in Fargo.

The Democratic field is far less impressive than even the Republicans’ circus of 2012. The viability of Hillary Clinton, however, hinges on the degree to which Valerie Jarrett & Co. wish to turn off or on Justice Department and intelligence community leaks about Clinton’s felonious behavior. Bernie Sanders, the rich man’s Eugene Debs of our age, is another Howard Dean campus flash-in-the-pan. The rest of the field — announced and rumored —  are other old white guys of the sort Democrats used to clamor were the doomed future of the Republican Party: Joe Biden, Jim Webb, Martin O’Malley, and John Kerry, Al Gore, and Jerry Brown in waiting if Hillary implodes and Biden balks. Here they are:

Biden: Somehow he did manage to make plagiarism quaint, being habitually wrong habitually predictable, and his crude ethnic insults were dismissed as little more than Joe just being “Old Joe.”

Brown: As if out from cryogenics, he will soon pledge to “protect the earth, serve the people and explore the universe.”

Clinton: We thought Bill was Dorian Gray, but look! — it was Hillary all along.

Gore: I don’t think even he would try it.

Kerry: Soon to come: He was for the Iran deal before he was against it.

End of the Summer Reading

I’ve read now twice Michael Walsh’s The Devil’s Pleasure Palace: The Cult of Critical Theory and the Subversion of the West [1]. As Walsh shows, one of the most depressing things about the 21st century has been the habitual whining of elites, and the vast abyss between their own privileges and their constant haranguing against the culture, politics, economics, and social life of America.

Walsh senses our anger with that disconnect, and he demonstrates that while in the past we always suffered through such nihilistic fits — self-critique is the lubricant of Western culture — the prewar and postwar importation of ideas from charlatans of the Frankfurt School in Germany was something new, and far more malignant.

Note that Republicans have taken back both houses of Congress, often win in the Supreme Court, have majorities in the state legislatures and governorships, and may win the presidency in 2016. And yet if one examines the schools and universities, Hollywood, the art world, what shows up on televisions and the news, whom the foundations are funding, what the clerks in government do — everything really from our monuments to poetry — it is hard not to confess that “we lost.”

In a word, relativism seems to have won. There are few standards left. Everything is negotiable, from the now fossilized idea of a traitor like Bergdahl to a neo-Confederate sanctuary city. A play, a movie, a building, a novel — anything really — cannot be assessed by absolute criteria, given that such “standards” are always set by oppressors of some sort, usually the children of capitalism and bourgeoisie consumerism who wish to enshrine their “privilege.” Take a sentence, chop it up into lines, and presto — a poem. By what standards is Chopin any more a genius than a Snoop Dogg? I thought of Walsh’s book yesterday when watching the various newscast reactions to the migration crisis in Europe and the deer-in-the-headlines faces of the European Eloi: Who are we to say that our culture is better than theirs? What is a border anyway? What even is a migrant? Whose values construct someone into the “Other”? Why do hosts enjoy privilege and guests do not?

Frankfurt intellectuals have done a lot of damage: from multiculturalism to postmodern art, they have destroyed the individual experience and made us cardboard cut-outs by their constant Marxist-inspired dumbing down, ending in a dreary predictable sameness. The past has become melodrama adjudicated by 30-year-old PhDs rather than muscular tragedy. When Obama decides to rename a mountain or brags that Trayvon looks like the son he never had or urges Latinos to “punish our enemies” and quips “typical white person,” he is more or less offering a paint-by-numbers version of the postmodernists who despise both the rich capitalist West whose bounty created their own leisure and subsidizes their nihilism, and the rest of us who lack their awareness and thus are unthinking cogs in a huge monotonous wheel. For the postmodernist, Middle America lacks the romance of the poor of the inner city that is never visited and the high culture of the Upper West Side or Georgetown that is prized.

Walsh writes both authoritatively and angrily. And he is right to be furious since 21st century America is branded with a highbrow nihilism, sarcasm, cynicism, and falsity, from the one-second pause of Jon Stewart to a David Letterman smirk. Walsh’s survey of art, music, literature, and history recalls much of Allan Bloom’s The Closing of the American Mind [2]. But as we creep up to the 30th anniversary of that book’s appearance, you put the The Devil’s Pleasure Palace down with the depressing sense that we have done a lot more damage and lost a lot more of what we were since Bloom’s warning of 1987.

[1] The Devil’s Pleasure Palace: The Cult of Critical Theory and the Subversion of the West: http://www.amazon.com/exec/obidos/ASIN/B00PSSEIXE/pjmedia-20