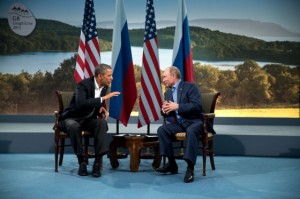 face invokes irony, hypocrisy, and paradox, because it is just the sort of normal Neanderthal tit-for-tat that was not supposed to happen under an Obama pathbreaking foreign policy.

He entered office chastising the Bush administration for its failure to talk with the Iranians and Syrians. The subtext was that Bush lacked both his own charm and insight into human character that together would produce results that Texan right-wingers stuck in Cold War prisms could hardly appreciate.

The Snowden putdown proved the proverbial icing on the cake, given that the Obama administration had always combined the worst of both diplomatic worlds with Putin, as it so often does with its empty redlines and deadlines: loud sermonizing without commensurate toughness.

Dropping the Eastern Europeans on missile defense, negotiating with the Russians on reducing strategic arms without much concern for our obligations to our non-nuclear allies that quite easily could become nuclear without our huge umbrella, the open-mic assurances of post-election flexibility, or pleading with the Russians to be reasonable on Iran and Syria was juxtaposed with loud lectures to the Putin authoritarians on human rights, tolerance of dissent, and proper behavior at the U.N.

Putin — earlier than other leaders — grasped that the U.S. was back to a utopian Jimmy Carter mode. And so, not content in finding advantage, he also seeks fun in publicly humiliating the U.S. He was always an unapologetic Russian nationalist, stung by the loss of prestige after the collapse of the Soviet Union, but reenergized by huge oil revenues. His stock and trade has always been pointing out Western moral hypocrisies — from supporting cruel anti-democratic Islamists to distorting U.N. resolutions on no-fly zones and humanitarian aid in Libya.

In that sense, he is the perfect antithesis to Obama. The sanctimonious Al-Arabiya interview, the Cairo Speech, and the missionary declarations on Libya all presupposed that Obama alone was sensitive to diverse cultures and had both the charisma and moxie to win over those who were previously alienated due to less-sophisticated American leaders.

The result is not just chaos in the Middle East — an unbound Iran, the Syrian quagmire, the Somalization of Libya, Benghazi, the closing of an unprecedented number of embassies, the Egyptian flip-flop-flips, another doomed Israeli-Palestinian initiative — but a global sense that most countries either politely tune Obama’s soaring rhetoric out, or enjoy finding ways to expose the lack of commensurate concrete consequences.

Putin knows that and positions himself as the sort of realist that mocks Obama’s pretensions. And while most abroad accept that he is a thug, they nevertheless seem to enjoy watching Putin, in spider-and-fly fashion, deflate our moral pretenses.

In light of the Soviet invasion of Afghanistan, the Communist insurgencies in Central America, the Iranian revolution and the taking of hostages in Tehran, and the Chinese invasion of Vietnam, Jimmy Carter committed to upping the defense budget, dropped his lectures on inordinate fears of communism, issued the “Carter Doctrine,” and gave up on coaxing Khomeini.

But for a variety of reasons, Obama is no Carter, and I doubt he will make such eleventh-hour adjustments.