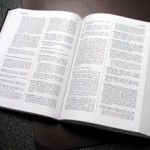 Assault Weapon: Paint your .22 black and add a plastic handle.

Baby: Punishment for a mistake.

Benghazi: We won’t have any more because one video-maker is now in prison.

Berlin Wall: Analogous to the Cold War fence that kept out German illegal aliens from entering a free East Berlin.

Biden: Buffoonery after it becomes boring.

Buffett: He alone built that.

Corporate Jet Owners: Sort of like Air Force One.

“Cowards”: Everybody but “my people.”

Debt Ceilings: Only Senate cowards vote not to raise them.

Drones: Sophisticated, humane military tools in the hands of the right commander in chief.

Enemies: Ours are to be punished at home, while courted abroad.

Erdogan: A valuable and trusted anti-Semite, racist, and religious bigot.

Genocide: An American crime unknown to the Germans, Hutus, and Turks.

Interest: It no longer exists.

Fast and Furious: More often a slow and methodical death.

First Amendment: So long, glad to have known you.

Food Stamps: Never stamps and not always for food.

Fracking: Produces way too much unnecessary energy and money.

Golf: A populist sport necessary to relieve the weekly tensions of average-guy presidents.

Global Warming: Along with rising seas, mostly ended by the president in 2009.

Jihad: A sort of personal journey to be posted on Facebook.

Law: Can occasionally be enforced against the right people.

Leading from Behind: Or rather following from the front.

Lobbyists: Disappeared from government in 2009.

Lying: Speaking untruth except when doing so before the Congress and under oath.

“Make No Mistake About It”: Something neither “perfectly clear” nor “in point of fact.”

Media: The Ministry of Truth.

Money: You have made enough of it already.

Muslims: Those who also worship Jesus but without the bothersome bible thumping.

NSA: Add another A and it would be an Islamic outreach agency.

Nuclear Option: To be outlawed, except in the Senate.

Profit: Not the time to.

Race: Cowards never talk about it.

Revolving Door: Abuses ended by those like Peter Orszag.

Spiking the Ball: You avoid that by mentioning a dead Osama bin Laden ad nauseam.

Spying: OK on friends, suspicious when on others.

Taxes: Never were raised on those who pay more of them.

Transparent: Say it enough and it happens.

Undocumented Workers: Never had documents and not all have worked.

Unemployment Rate: It depends on why you want to know.

White Hispanic: Not to be confused with white African-American.

Wind and Solar: Like farm subsidies without the farm.