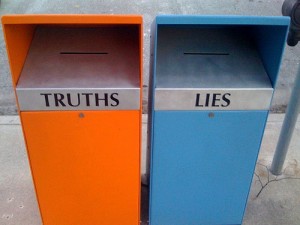 In this regard, it was understandable that the New York Times characterized the president’s not telling the truth on over 20 occasions as cases of “misspeaking.” Translated, that means he lied but his lies were really true: Misspeaking means that Obama was not sensitive enough to those of us still mired in calcified definitions of true and false. The privileged still cross t’s and dot i’s; their victims have no such luxury.

Earlier, Obama himself had falsely claimed that he had never stated that Americans would not lose either their health insurance or their doctors, and would not pay more for their new coverage (e.g., “If you had one of these plans before the Affordable Care Act came into law and you really liked that plan, what we said was you can keep it if it hasn’t changed since the law passed” [emphasis added]). But so what?

What does it matter whether Obama had never once added the qualifier “if it hasn’t changed since the law passed,” so long as he (or rather “we”?) had wanted to say it, and if saying it now enhances a progressive program? What difference does it make whether the president of the United States has lied about his earlier lies — given his consistently noble intent?

Those who object that the issue is health care, and not lies, fail to see that the two were always inseparable. Obama knowingly and serially said something that he knew was not true because he did not wish to take the trouble to explain to the American people that, yes, several million people with individual plans would lose their existing health insurance — and many of them would have to change doctors and pay more in premiums — but they would in the long term, and in theory, be better off, and in fact, in the short term, would serve the public good by subsidizing the care of the less well-off. But the president knew that many Americans would see that as a socialist stretch. He lacked the confidence that he could sell that argument politically, and so he chose not to try. Why play the reactionaries’ game?

In the postmodern world of the New York Times and Barack Obama, again, “truth” is a relative concept. For reactionaries stuck in ossified notions of absolute truth, perhaps indeed Obama did “misspeak.” But for progressives of our brave new world, Obama was all along speaking truth to power merely by using linguistic gymnastics to advance a larger good — the idea that the privileged who had managed to acquire good health insurance should at last pay more in order to cover those who in the past undeservedly had been deprived of commensurate coverage.

If ACA navigators on occasion have urged poor applicants to fudge on their eligibility, what is the big deal? Are those really lies — given that the system that reduced some Americans to poverty and the status of the uninsured is one big lie to begin with? When “regulations” are enforced about voter IDs, Obamaphones, or eligibility for disability insurance and food stamps, poor people suffer; when they are ignored, the real truth emerges and a higher justice is served.

Of course, the apparently clueless who had bought certain types of insurance did not realize that they had “subpar” or “junk” plans issued by “bad-apple insurers.” Again, how could the president be accused of lying when he was helping the uninformed to be released from their “crap” coverage in order to purchase the superior Obamacare product? As Obama put it, “So the majority of folks will end up being better off, of course, because the website’s not workin’ right, they don’t necessarily know it.”

When U.N. Ambassador Susan Rice lied five times on national television about the Benghazi deaths, followed by Hillary Clinton over the coffins of the dead men and yet again by Barack Obama at the United Nations, they were not really telling untruths. Rather, Rice was merely blaming the reactionary bigot Nakoula Basseley Nakoula for his unenlightened views on Islam, which had earned understandable outrage. Can anyone deny that Nakoula was insensitive?

What difference did it make who actually shot and killed four Americans and why, when the U.S. government so clearly and forcefully had come down on the right side in condemning and then jailing an Islamophobe? If Nakoula did not incite this particular riot in Libya, his venomous video surely could have, and, in fact, it might have elsewhere. What difference did the trivial circumstances of the Benghazi violence make in the larger pursuit of religious tolerance?

What really was the problem with the IRS tax-exempt division? Sticklers for detail might object that perhaps Lois Lerner & Co. improperly denied tax-exempt status to perceived reactionary groups. But is anyone denying that the tea-party affiliates were reactionary, or that they needed to be advised that they could not simply voice their odious views at government expense?

Right and wrong, like truth and lies, are calcified concepts in service to a rigged world of discrimination. If those who enjoy privilege are upset that a mild regulation was bypassed, well, too bad: It was worth it to prevent the Tea Party from derailing the reelection efforts of a progressive president. And if the IRS overpaid $132 billion in earned-income tax credits to those with low incomes, again, why the outrage? These are details that pale in comparison to the larger picture of social justice: Did or did not the poor at last receive some help from the government? Were or were not reactionary groups prevented from promulgating their untruths about a progressive president?

Does anyone deny that James Rosen works for Fox News and that Fox News opposes social justice? And why the outcry when subversive AP reporters suffered a little of what millions of the far less privileged suffer every day? Who cares whether reset with Russia was achieved, given that no one denies that the president wanted better relations with Russia? If Obama wanted Guantanamo closed, then it is virtually closed. Does anyone believe that Obama wanted unemployment to stay over 7 percent or GDP growth below 2 percent? Why then does it matter that what he said would happen — the deficit halved by the end of his first term — did not happen? If he wanted to halve the deficit, but found out that doing so would only hurt the deserving, then what does it matter if he doubled it instead?

To obsessive-compulsive accountants, perhaps the Pigford agricultural payouts were fraudulent, but who can deny that many of the poor recipients might have wished to farm? And if they had wished to farm, they might well have been discouraged to do so in discriminatory fashion by the U.S. Department of Agriculture. So what difference does it make if a few thousand potential victims claimed they were actual victims?

The Left, which cares for humanity and strives for fairness and equality, has earned the moral right of exemption from one-dimensional truth. The Right, which focuses on the liberty of the selfish individual to do what he pleases against the collective interest, has not.

All of the above also goes for illegal immigration. The term “illegal alien” itself is misleading. Only reactionaries could believe that someone from south of the border is an alien or that anyone who broke a law to arrive here, and has broken more to stay, is doing so illegally. These are linguistic niceties that disguise a greater truth. Poorer indigenous people from Mexico and elsewhere in Latin America should not be categorized by an arbitrarily designated and constructed border, when they have an inherent right to go and live where they please, especially given their suffering and exploitation while working in the U.S. In matters of social justice, there is no room for constructed notions of alien or citizen, illegal or legal, immigrant or native. If the laws that enhance privileges of race and class are “broken,” then that is to the good, given the greater issues of social justice at stake. Building a house without a permit is illegal; signing an affidavit affirming that one is a citizen when one is not is at most an “infraction” or a “civil” infringement.

Postmodern lying is also at the heart of arbitrarily discarding settled law. Do we really care when capitalists remind us that elite bondholder creditors, not union working people, had prior contractual preference in the Chrysler bailout? Who do we think wrote such contractual law in the first place, and for what purpose?

Or does it matter that from time to time that the president simply chooses not to enforce settled law, whether by granting amnesties or by dropping elements of his own health-care law — given that he is interested in a higher law that rests on fairness for the many rather than privilege for the few? Who wrote the Defense of Marriage Act and for what purpose matters in deciding whether it should be enforced; the fact that it was enacted by Congress and signed by the president does not.

Worrying whether Barack Obama lied about the implementation of Obamacare or about Benghazi, or for that matter about closing Guantanamo, halving the deficit, ending the revolving door, or reducing unemployment, is a fruitless exercise. Obama says what he must to advance the cause of social justice, and he leaves the less enlightened to argue over whether his advocacy conforms to their own ossified standards of truth — oblivious that the president has long ago left them far behind in his quest for a larger justice.