The meaning of works, and history itself, are malleable when it comes to our president and his record. 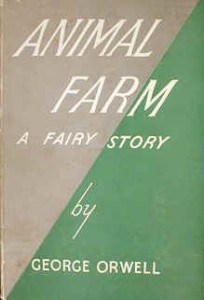 us the word “Orwellian.” That adjective reflects a vast government’s efforts not just to deceive and control the people, but also to do so by reinventing the meaning of ordinary words while rewriting the past itself.

America, of all places, is becoming Orwellian. The president repeatedly reminds the American people that under his leadership, the U.S. has produced a record level of new oil and natural gas. But didn’t Obama radically curtail leases for just such new energy production on federal lands? Have the edicts on the barn wall ofAnimal Farm been changed again, with the production of new oil and gas suddenly going from bad to good?

Does anyone remember that the Affordable Care Act was sold on the premise that it would guarantee retention of existing health plans and doctors, create 4 million new jobs, and save families $2,500 a year in premiums, all while extending expanded coverage to more people at a lower cost?

Only in Orwell’s world of doublespeak could raising taxes, while the costs of millions of health plans soars, be called “affordable.” Is losing your existing plan and doctor a way of retaining them?

The Congressional Budget Office recently warned that Obamacare would “keep hours worked and potential output during the next 10 years lower than they would be otherwise.” That nonpartisan verdict should be bad news for workers.

Not in our brave new world. The Obama administration says it is pleased that workers will now be freed from “job lock.” What is job lock — a made-up Newspeak word right out of 1984? Work fewer hours, make less money, and create fewer outputs — and be happy.

About every January since 2009, the president has promised to close Guantanamo Bay. Is the detention facility now sort of virtually closed — in the manner that Syrian president Bashar Assad and his chemical weapons are now virtually gone as Obama decreed years ago, and in the manner that we are still hunting down the murderers in Benghazi who were supposedly outraged over a video? Is there an Orwellian “memory hole” where these embarrassing proclamations are disposed?

In 2004, many in the media reported that George W. Bush, the demonized Emmanuel Goldstein of our era, had overseen a “jobless recovery.” Unemployment at election time in 2004 was 5.4 percent.

Yet since January 2009, only two months have seen joblessness dip slightly below 7 percent. A record 90 million able-bodied Americans are not participating in the workforce. Yet the president, in Orwellian doublespeak fashion, recently claimed that the job picture is good. If 5.4 percent unemployment was once called a jobless recovery, are we now in a jobless recovery from a jobless recovery?

In 2013, the IRS confessed that it had targeted particular political groups based on their names or political themes — a Big Brother intrusion into private lives that was revealed at about the same time the Associated Press and National Security Agency eavesdropping scandals came to light. During the initial media frenzy, President Obama blasted the politicization of the IRS as “outrageous.”

After the IRS was confirmed to be delaying the tax-exempt requests of conservative groups at a far greater rate than their liberal counterparts, the agency’s director, Douglas Shulman, stepped down at the end of his term. His replacement, acting commissioner Steven Miller, subsequently resigned from the agency. And the IRS official in charge of tax-exempt decisions, Lois Lerner, invoked her Fifth Amendment right against self-incrimination before Congress. She and Joseph H. Grant, commissioner of the Tax Exempt and Government Entities Division, both abruptly retired from the IRS.

Congressional committees and the treasury inspector general for tax administration found that groups loosely associated with the Tea Party were more likely to have their tax-exempt requests put on hold than other nonprofits. Yet recently, President Obama concluded of this entire mess that it did not entail “even a smidgen of corruption.”

It takes Orwell’s doublethink to explain how a scandal might have rated an “outrageous” before the people in charge quit, retired, or invoked the Fifth Amendment, and then, after their embarrassing departures, was reinvented as an episode without a smidgen of corruption.

In politics, of course, Left and Right, conservative and liberal, make up stuff. But Orwell, who also blasted the rise of European fascism, focused more on the mind games of the statist Left.

Why? He apparently feared that the Left suffered an additional wage of hypocrisy in more openly proclaiming the noble interests of “the people.” Because of those supposedly exalted ends of equality and fairness, statists were more likely to get a pass from the media and public for the scary means they employed to achieve them.

Right now in America, the words and deeds of both past and present become reality only when the leaders put them in the correct service of the people.