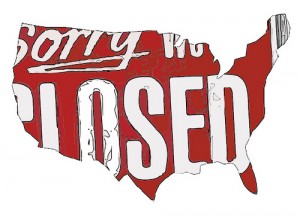 At first glance, the Republicans seemed to be losing the so-called shut-down impasse, inasmuch as Obamacare, as the president termed it, was “settled law” and the Republicans did not have the congressional clout to overturn it. No one likes, after all, to be turned away from Yosemite on a pleasant autumn day, because of Beltway gymnastics.

Yet the politics are likely to change the longer this drags on, and at some point Obama will see the writing on the wall.

First, the legions of federally employed constituents, the lesser Lois Lerners of the bureaucracy, have played the shutdown badly. Like supervisors at the IRS, many want to freelance their pettiness to showcase their Obama fides—and thereby screw up. No one wishes to see veterans turned away from open-air monuments, while illegal aliens are invited into public federal spaces to protest against their supposedly insensitive host whose laws they are daily breaking (at a time of a government shutdown, try protesting en masse in the Zócalo in Mexico City for your inherent rights as an illegal, foreign resident of Mexico).

Second, the long-term trajectory of the debate is not so sanguine for the Democrats. The initial news of the Obamacare inaugural is horrible—aside from the inability of so-called techies and social-media gurus to run a website (can’t the geniuses who ran the websites of Obama 2012 run those of the ACA?). True, for now the bad press is eclipsed by the shutdown. But there is nothing intrinsic in Obamacare that is ever going to make people like it. Well before the long waits and reduced care, the carefree young struggling to find a part-time job will be shocked by a huge de facto tax on them; the majority with existing health-care plans will find their premiums spiking; and many of those without insurance, contrary to Obama’s protestations, have always found some avenues for care in free state and federal clinics and emergency rooms that will be seen as preferable to either paying a fine or buying insurance. No one wants to hear that unions, businesses, and government grandees are finding ways to avoid what most cannot.

Third, there is the impending debt-ceiling debate. If voters don’t like shutdowns, they even more so do not like borrowing another trillion dollars.

Finally, Obama’s near daily commentaries are utterly incoherent. Well aside from hokey similes, almost everything he says is demonstrably untrue.

He himself overturned “settled law” by nullifying key parts of his own signature legislation, such as the employer mandate.

He calls for bipartisanship but proved entirely partisan in ramming through the ACA without a single Republican vote.

He and his associates call for civility but use the terrorist/anarchist/deadbeat/blackmail metaphors non-stop; when he is not trashing Republicans, Obama is talking down financial markets.

He cites a unique and dangerous precedent, but knows that the government has been shut down lots of times (by Democrats no less) in the past over similar differences on spending.

He brags that deficits are coming down, but knows (as is the case of increased gas and oil production) that is true only despite not because of his efforts, and due mostly to the prior debate over the debt ceiling that ushered in sequestration.

And he knows that no one was more eloquent in voicing the current Republican position on the debt ceiling than he was as a senator in 2006 when the debt was $8 trillion less than it is now. Given all that, his bully pulpit has proven mostly pathetic.

Who knows what Obama’s compromise position will be—perhaps just getting the bill he always wanted but without any of his subsequent waivers whatsoever: no pet businesses exempt, no politicians and congressional staffers exempt, no employer mandate exemption, no unions exempt: everyone in it together right before the 2014 elections.