Hostile countries with nuclear capabilities have the upper hand on the global police.

The gangster state of North Korea became a nuclear power in 2006–07, despite lots of foreign aid aimed at precluding just such proliferation — help usually not otherwise accorded such a loony dictatorship. Apparently the civilized world rightly suspected that, if nuclear, Pyongyang would either export nuclear 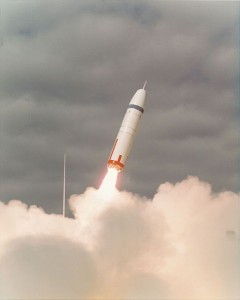 material and expertise to other unstable countries, or bully its successful but non-nuclear neighbors — or both.

The United States has given billions of dollars in foreign aid to Pakistan, whose Islamist gangs have spearheaded radical anti-American terrorism. Ever since a corrupt Pakistan went nuclear in 1998, it has been able to extort such foreign-aid payouts — on fears that one of its nukes might end up in the hands of terrorists.

By any measure of economic success or political stability, without nuclear weapons Pakistan would not warrant either the cash or the attention it wins.

2. The more loco a nuclear nation sounds, the more likely it is that civilized states will fear that it is not subject to nuclear deterrence, and so the more likely that they will pay bribes for it to behave. Gangbangers always claim they have nothing to lose; their more responsible intended targets have everything to lose.

3. As of yet there are no 100 percent effective nuclear-defense systems that can guarantee non-nuclear powers absolute safety from a sudden attack. The nuclear gangbanger, not the global police, currently has the upper hand.

Again, the actual bombs are not the problem. We do not worry about a nuclear but democratic Israel or France. We are not even bothered by a hostile but non-nuclear Cuba or Venezuela. The combination of a bomb with a rap sheet is what changes all diplomatic and strategic considerations.

It would be hard to contain a nuclear Iran with bribes, as we have so far handled Pakistan — and in the past North Korea as well. In both cases, we have had some help. Nuclear neighbor India assists in warning Pakistan to behave. A nervous Chinese overlord is amused by North Korean troublemaking — but only up to the point at which North Korea might threaten China’s vital export markets.

In contrast, only one of Iran’s two enemies — Israel — is nuclear. Its wealthier, Sunni Saudi Arabian rival is not.

When Iran goes nuclear, one of two things will follow. Either its Arab rivals will buy nuclear weapons from Pakistan to ensure that Iran does not bully them for political concessions — on matters of oil production and pricing, autonomy for Shiite minorities, and an end to non-belligerency with Israel — or the Sunni powers will accept Iran’s hegemony in order to win exemption from its episodic lunatic threats of Armageddon. Either way, the Middle East will become a far more dangerous place.

There is yet another side to the nuclear gangbangers: the reaction of non-nuclear democratic civilized states that must live with their occasional existential threats.

Australia, Japan, the Philippines, South Korea, and Taiwan have the expertise, but so far have not had the need, to become nuclear states. Up to now, they have all felt that America’s power was overwhelming and its security guarantees were ironclad.

In addition, nuclear China and Russia were not so threatening after the end of the Cold War. The expense, the odium, and the memories of horrific wars made nuclear proliferation unimaginable.

All that could soon change. The one constant in American foreign policy over the last five years is that the administration’s game changers, red lines, and deadlines proved mostly negotiable. Meanwhile, China is beginning to translate its economic success into military adventurism, in the same manner as imperial Japan did in the late 1920s and early 1930s.

The more nuclear powers there are, the less resistance there is to the addition of a new one. War would not necessarily be inevitable in the China Sea should there soon be five or six nuclear powers with a presence in the region, rather than the present China, U.S., and North Korea. But the odds of conflict would increase — and the ability of the United States to ensure calm would diminish even further.

So far we have talked of democratic nuclear powers containing, coaxing, or bribing outlaw nuclear gangsters to be reasonable — or threatening military force to disrupt their nuclear programs before they come on line.

Yet just as likely looms the sudden growth in the nuclear family of responsible powers, who at present have no sure source of deterring nuclear renegades. Would a rich but non-nuclear Germany always count on a retrenching U.S., a fickle nuclear France, bribes, or diplomacy to convince theocratic Iran to turn its missiles in a different direction? And if Iran has a bomb, why not Turkey? Or, for that matter, Brazil?

In such a nuclear club of 20 or more, rather than the present nine nuclear powers, border disputes, religious rivalries, ideological antagonisms, and terrorism could all escalate not just to regional wars, but to the end of 21st-century culture itself.

Victor Davis Hanson is a classicist and historian at the Hoover Institution, Stanford University, and the author, most recently, of  The Savior Generals. You can reach him by e-mailing author@victorhanson.com.