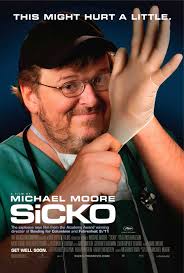 I know that it’s shooting whales in a barrel to point out Michael Moore’s — once a guest in the Carter presidential box at the 2004 Democratic Convention — continued displays of ignorance. Nonetheless, the latest example is Moore’s lingering hurt because years ago Clint Eastwood once deadpanned that should Moore show up with his camera at Eastwood’s door (in the fashion that Moore himself had once attempted to ambush and embarrass actor Charlton Heston), Eastwood then might shoot him.

I suppose Moore was trying to suggest that the director of American Sniper logically transposed his own innate murderous instincts onto his movie, which Moore alone sensed.

But given that Moore is both stupid and a hypocrite, almost everything he says is either incoherent or a projection of his own pathologies. After all, he slammed sniping, then backtracked and said sniping was okay if used on the defensive by the invaded. In doing so, he nullified his own point that his uncle who invaded foreign ground was killed by a cowardly sniper — who apparently must have also had good reason to take to sniping against such foreign invaders on Asian ground.

But if Eastwood was likely kidding about shooting an obnoxious pseudo-documentarian, Moore himself was deadly serious when he all but condoned killing not just one, but thousands of Americans.

Does he recall that after 9/11 he lamented not so much the attacks, but that the attacks had killed the wrong 3,000 rather than the culpable who had voted for Bush?

If someone did this [9/11] to get back at Bush, then they did so by killing thousands of people who DID NOT VOTE for him! Boston, New York, D.C., and the planes’ destination of California — these were places that voted AGAINST Bush!

Later Moore went further and praised the killing of American soldiers in Iraq by supposed jihadists and Baathist “Minutemen”:

The Iraqis who have risen up against the occupation are not “insurgents” or “terrorists” or “The Enemy.” They are the REVOLUTION, the Minutemen, and their numbers will grow — and they will win. Get it, Mr. Bush?

And he clearly thought Americans should die for the price of their support for the removal of Saddam Hussein:

There is a lot of talk amongst Bush’s opponents that we should turn this war over to the United Nations. Why should the other countries of this world, countries who tried to talk us out of this folly, now have to clean up our mess? I oppose the U.N. or anyone else risking the lives of their citizens to extract us from our debacle. I’m sorry, but the majority of Americans supported this war once it began and, sadly, that majority must now sacrifice their children until enough blood has been let that maybe — just maybe — God and the Iraqi people will forgive us in the end.

Whereas Eastwood joked about a hypothetical act of personal violence, Moore was deadly serious in condoning past mass killing.

4 thoughts on “Moore of Michael’s Nuttery”