China and Russia are no more impressed with empty bluster today than Japan was in 1941.

The Roosevelt administration once talked loudly of pivoting to Asia to thwart a rising Japan. As a token of its seriousness, in May 1940 it moved the home port of the Seventh Fleet from San Diego to Pearl Harbor — but without beefing up the fleet’s strength. 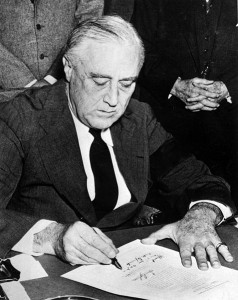 The then-commander of the Pacific Fleet, Admiral James O. Richardson, an expert on the Japanese Imperial Navy, protested vehemently over such a reckless redeployment. He felt that the move might invite, but could not guard against, surprise attack.

Richardson was eventually relieved of his command and his career was ruined — even as he was later proved right when Japan attacked Pearl Harbor on December 7, 1941.

Britain at the same time promoted a loud Singapore Strategy, trumpeting its Malaysian base as the “Gibraltar of the Pacific.” But London did not send out up-to-date planes, carriers, or gunnery to the Pacific.

Japan was not impressed. It surprise-attacked the base right after Pearl Harbor. The British surrendered Singapore in February 1942, in the most ignominious defeat in British military history.

By 1949, the U.S. was pledged to containing the expansion of Communism in Asia — even as Secretary of Defense Louis Johnson (who had been chief fundraiser for Truman’s 1948 campaign) declared that the Navy and Marines were obsolete. He began to slash both their budgets.

A “revolt of the admirals” followed, to no avail. But Mao Zedong’s China and Stalin’s Soviet Union took note of the new disconnect between American bluster and massive defense cuts. So they green-lighted a North Korean invasion of South Korea in June 1950.

The common historical denominator is that Asia and the Pacific are always dangerous places, where calling for tough action is not the same as preparing for the consequences of upping the ante. Loud talk sometimes even encourages a thuggish challenge to prove it.

Unless the United States in any meaningful way backs up its current flamboyant “pivot” to Asia with additional ships, air wings, and manpower, there is no sense in chest-pounding our resolve to our increasingly orphaned allies, who may soon have to choose between acquiescing to China and going nuclear.

China will not be impressed that we talk confidently even as we cut defense — just as imperial Japan was not awed when aged American battleships were ordered westward to Pearl Harbor as a gesture.

Nor did the Japanese tremble when the British battleship Prince of Wales and battle cruiser Repulse were sent without air cover to Singapore. Both were seen as targets rather than deterrents and so soon ended up at the bottom of the sea.

Likewise, in the late 1940s, “containing Red China” meant nothing when the postwar U.S. had canceled new aircraft carriers, even as it still deployed on the cheap vulnerable small garrisons of troops all over Asia.

President Obama’s pivot has now joined his stable of deadlines, red lines, step-over lines, and “I don’t bluff” and “I’m not kidding” assertions. The problem with such rhetoric is not just that it is empty, but that it is predictably empty. If Obama cannot lead, can he at least keep quiet about it?

A Russia, China, North Korea, or Iran is not just unimpressed but encouraged, seeing such sermonizing as an assurance of nothing to follow. Obama’s threats are like a gambler’s involuntary tic, which astute poker players read always as a forewarning of a bluffed empty hand to follow.

A wiser course is to decide in advance where the U.S. is capable of deterring aggression and where it either has no interest in trying or has no power even if it wished to. Then, once our security parameters are established, we should stay largely quiet, consult our allies, keep troublemakers guessing about our next move, and then use force if necessary to stop their aggressions.

The Japanese, Taiwanese, South Koreans, Filipinos, and Australians are more likely to assume their democracies are safe when they see a U.S. carrier that means business than when they hear the president or his secretary of state lecture an aggressor about its unacceptable 19th-century behavior, the Third World about its homophobia, or the world about the dangers of climate change.

Consider also Russia. We forget that “reset” in 2009 was a loud Obama attempt to reverse the Bush administration’s efforts to punish Russia for its aggression against Georgia — a Russian gambit itself perhaps predicated on the impression that the United States was bogged down in Afghanistan and Iraq, and that the Bush administration had been weakened by the midterm elections of 2006. Bush’s efforts to promote new missile-defense initiatives with Poland and the Czech Republic, suspension of nuclear-arms-limitation talks, curtailment of official communications with Moscow, and bolder efforts to isolate Iran from Russian interference were all intended to advise Moscow not to bully its neighbors.

Yet Obama entered office declaring that it was the Bush administration’s reaction to the Georgia aggression, and not the Russian invasion itself, that had cooled U.S.–Russian relations. The result was a red plastic reset button that presaged loud lectures about human rights in Russia without any real, concrete follow-through.

Our relationship with Russia is far worse now than during the Bush administration. Vladimir Putin is not just not deterred — who would be, after the U.S. fickleness in Libya, Egypt, and Syria, and in dealing with Iran? — but quite eager in the Crimea and Ukraine to show the world how to deflate American moralistic sermonizing. Putin believes that his amoral show of power impresses others who admire not his strength — for in truth he has little of it — but the simulation of strength that wins him support at home and a sort of sick admiration abroad.

Being weak is sometimes dangerous. Being loud, self-righteous, and weak is always very dangerous indeed.

NRO contributor Victor Davis Hanson is a senior fellow at the Hoover Institution and the author, most recently, of  The Savior Generals.