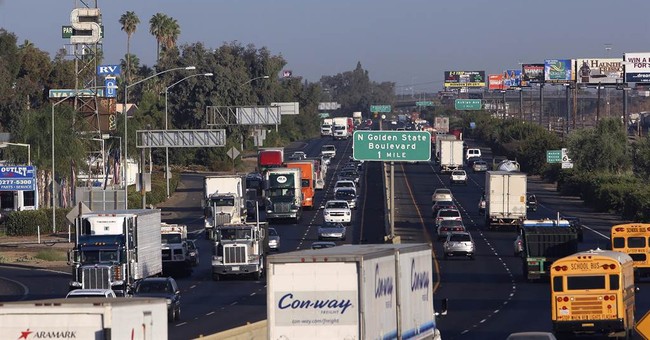 California State Route 99 is the north-south highway that cuts through the great Central Valley. And it has changed little since the mid-1960s.

A half-century ago, when the state population was about 18 million — not nearly 40 million as it is today — the 99 used to be a high-speed, four-lane marvel. It was a crown jewel in California’s cutting-edge freeway system.

The 99 was recently ranked by ValuePenguin (a private consumer research organization) as the deadliest major highway in the nation. Locals who live along its 400-plus miles often go to bed after seeing lurid TV news reports of nocturnal multi-car accidents. Then they wake up to Central Valley radio accounts of morning carnage on the 99.

The 99 is undergoing a $1 billion, multi-decade upgrade to increase its four lanes to six. Promises have been made to build off- and on-ramps in place of haphazard exits and entries from the old days of cross traffic.

In many of the most dangerous southern portions of the 99, huge semi trucks hog two lanes. Speeders weave in and out of traffic. They still try to drive 70 mph in the manner you could 50 years ago when traffic was less clogged. Text-messaging drivers are now even more dangerous than the intoxicated.

The 99 is emblematic of a state in psychological and material decline.

Running parallel to the southern portion of the 99 is an underused, subsidized Amtrak passenger rail line. Not far away is yet another rail corridor, where the state is plowing up some of its best farmland to build the first link of high-speed rail. That boondoggle’s projected price tag has soared from the original $33 billion to somewhere between $60 and $100 billion — without a single foot of track yet laid.

Californians are apparently too sophisticated to allot $10 billion or so to first ensure that the state has adequate north-south freeways. In addition to the 99, state residents must also contend with the equally primitive coastal Highway 101 and the now-overcrowded Interstate 5.

All societies in decline fixate on impossible postmodern dreams as a way of disguising their inability to address premodern problems.

Ensuring that California’s freeways were all six lanes, well-lit and safe would have been a gargantuan but practical task that could have been completed long ago and would have saved thousands of lives (though it would have required the admission that the mundane modern automobile was here to stay). Instead, cool bureaucrats and hip politicians preferred to blow money on visions of grandiose space-age rail.

The 99 also reminds the nation of California’s unique lessons about how to ruin a paradise: The more taxes are raised, the worse public service often becomes.

Currently, Californians pay among the highest sales, income and gasoline taxes in the nation. Yet in return, the state’s decrepit transportation system in many national surveys rates nearly last. California public school test scores are likewise near the bottom of national rankings.

The state has become a pharaonic society of two classes. The coastal rich are exempt from financial worries over their high-tax dreams. And the subsidized poor in the state’s interior live out the real-life consequences. Meanwhile, the disrespected middle class, without either high incomes or state entitlements, is leaving the state in droves.

The 99 has become a neglected, poor person’s highway. California has far more residents receiving welfare than any other state, and it has among the highest poverty rates in the nation. Most of the state’s poorest counties are bisected by the 99. About a quarter of California’s inhabitants were not born in the United States. Many are still not U.S. citizens.

The result is a perfect storm that blows in daily over the 99.

The hazardous conditions of stretches of the highway and the 99’s enormous traffic volume are compounded by old and unsafe automobiles and trucks — and by California’s many inexperienced drivers, unfamiliar with U.S. driving etiquette and laws. The drivers of flatbed and pickup trucks on the 99 often do not tie down their loads.

The highway can often resemble a two-lane obstacle course. It takes only a single lost mattress, a bin of overturned peaches or a motorcyclist failing to navigate between stalled cars to shut down the 99 — and with it the state’s north-south commerce.

The 99 offers a number of banal (and oft-forgotten) lessons handed down from our grandparents, who mapped out what once was the nation’s premier transportation system. Highways, along with dams, canals and bridges, are the lifeblood of a state, a far more important priority than investing in transgendered restrooms or efforts to save the Delhi Sands flower-loving fly.

Only measured, diverse and legal immigration, coupled with rapid assimilation and integration, can ensure that diversity is a strength.

The rich who can easily pay high taxes should not impose them on those who cannot.

Finally, the dreams of elites become quite dangerous realities when first tried out on more vulnerable and distant “others.”

Click on the image above to view Victor Davis Hanson's Interview with Megyn Kelly on CSPAN Book TV.

Get VDH's "Week In Review"