Faster, please: A great pushback is awakening here and abroad, but its timing, nature, and future remain mysterious. 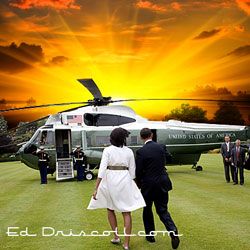 Given European socialism, and given its therapeutic culture that assumes morality is relative and situational, it is quite stunning — especially to the Greeks — that suddenly debts are to mean not endless negotiations, haggling, blame-gaming, and contextualization, but are reduced to something akin to Calvin Coolidge’s snarky alleged quote, “They hired the money, didn’t they?”

Aside from the threats of Vladimir Putin and the wobbling of the European Union, Europe is being overrun with illegal immigrants from Africa, Asia and the Middle East. Once an impoverished foreign national arrives at any European shore, the European Union, either out of utopian piety or colonial guilt, feels obligated to accept him, without questioning much his legal status or the reasons for his arrival — much less why it should not extend such magnanimity to tens of millions of others who may well follow.

But the cash-strapped leftwing European public, outside its privileged elite, is slowly tiring of illegal immigration as well. Apparently it has concluded that tens of millions of illegal migrants neither assimilate quickly nor are much thankful to their hosts for their sanctuary status — and that hundreds of millions more would come if they could to enjoy the European welfare state. An aging and shrinking European socialism accepts that its own redistributionist entitlements are not sustainable. But it also assumes that those arriving from the former Third World have neither the interest nor the skills to join the labor force to subsidize their hosts’ own generous retirement packages.

At home the progressive Left is on the scent of another scalp, this time Donald Trump’s for his uncouth and blunderbuss stereotyping of illegal immigrants from Mexico, who, he implies, are for the most part not Mexico’s choice citizenry and who have a tendency to commit various crimes upon arrival.

The best way to refute the shoot-from-the-hip Trump’s stereotyping of an entire illegal immigration population as inordinately committing crimes and relying on state subsidies should be easy: his critics should not quote creased-browed professors and outraged ethnic activists, but first cite federal and state statistics of crimes committed by illegal aliens as well as the legal status of those on federal and state assistance, and then calculate to what degree these percentages are not — or in fact are — in line with the native American population.

Of course, Trump’s opponents rarely do that, partly because governments, both state and federal — which love to categorize Americans by race, class, and gender — strangely claim that they do not have accurate and up-to-date statistics on illegal aliens. When the liberal PolitiFact stitches together what facts it can find to properly refute Fox pundit Gavin McInnes’s erroneous claim that 50 percent of Texas murders were committed by illegal aliens, does it then go on to correct the record with a more accurate percentage?

Open-borders advocates typecast every bit as much as does Trump, likewise adducing anecdote in lieu of hard data. If one listens to the exaggerations of Trump, he implies that the majority of arrivals from Mexico are criminally minded. But if one listens to La Raza Inc. or Rep. Gutierrez, illegal aliens seem to be all dreamers. The truth is that impoverished and most indigenous peoples from central Mexico and Central America are neither saints nor sinners, but as a rule arrive without legality, a high school diploma, money, or English, and by needs are quite willing to ignore immigration law both when arriving — and steadily thereafter. (The vast majority — over 80% — from last year’s border surge skipped their required subsequent immigration hearings.)

Presidential candidate Trump is supposedly enjoying a bump in the polls. How could that be, given his plutocratic hubris, his flamboyance and his often sloppy rhetoric? Again the answer is predictable. He is blunt — and uncouth; while the Left is sly and uncouth. The public sometimes prefers their exaggerations as bold and not packaged in nasal whines. We are supposed to shudder at the reaction when writer Ann Coulter, promoting a supposedly nativist book about immigration, is rushed by illegal immigration activists at a book signing. Then she confirms our stereotypes by declaring that Latin Americans typically express criticism in such a riotous fashion. The media forgets that she is matched and trumped by the activists themselves. They disrupted a peaceful book signing; they tore up books that they disagreed with (an act which has a good 20th-century fascist pedigree); some brought out Mexican flags to show solidarity with the country that they most certainly do not wish to return to. And there was a shout or two, in racist fashion, that Coulter should return to Europe — as if a guest here illegally from a foreign country has a greater claim on residence than does a U.S. citizen.

As in the case of Paula Deen [1], Duck Dynasty, and the addled Donald Sterling, the nation unleashed its thought police to destroy Trump in the fashion that has worked so well with other intemperate or biased speakers (at least those who are not of the liberal bent of politically incorrect gaffers like a Sen. Harry Reid, Vice President Joe Biden, Al Sharpton, David Letterman — or Barack Obama, who believes “typical” white people (all 220 million?) stereotype blacks while there are apparently “gangbangers” crossing illegally into the U.S. on his watch).  But so far, the politically selective yanked sponsorships and corporate ostracism seem to have little effect on the self-promoting and boisterous multibillionaire Trump. Why so? Perhaps the cause is again public exhaustion with hypocrisy [2]. NBC, after all, still has on the air an inveterate prevaricator like Brian Williams [3] and a homophobe, racist, and anti-Semite like Al Sharpton [4] — after publication of their respective make-believe stories and various hate speech.

Trump seems to sense that if he is to play the role of an IED, at least there are lots of collateral liberal hypocrisies that can blow up along with his own biases. Are people then fed up with the thought police, who can go from a reasonable request not to use state subsidies and sanctions to fly the Confederate battle flag to the hysterical Trostykization of everything Confederate in popular culture and entertainment? How did we go from Hillary Clinton and Barack Obama lecturing us recently on why gay marriage was neither necessary nor appropriate to similar skepticism earning others a career-ending rebuke? Why did not the president power up the White House in 2009 or 2011 with the gay rainbow light show?

If Trump is completely unhinged, then it would be impossible last week for illegal alien Francisco Sanchez  to randomly shoot apart the aorta of passerby Kathryn Steinle — out for a pleasant stroll with her father on a pier walkway in sanctuary city San Francisco. Trump, of course, in the fashion that Barack Obama routinely cites Trayvon Martin and other tragedies, used the murder as proof [5] that his generalizations are based on some fact.

And perhaps in some cases they are. Sanchez had already been deported to Mexico five times and arrested, convicted and incarcerated — and paroled — for seven prior felonies. He was out largely because he was released from custody by a San Francisco judge in accordance with the city’s “sanctuary” policy of not notifying immigration authorities when an illegal alien, ex-felon or not, is freed from jail.

None of that laxity is new to San Francisco. Recall the 2008 murder of San Francisco resident Tony Bologna and his two sons by illegal alien and paroled felon Edwin Ramos. Nor is it novel in California in general: recall last October the two Sacramento-area law enforcement officers who were murdered by  twice-deported illegal alien Luis Enrique Monroy-Bracamontes.

Quite tiring it has become to be lectured about inordinate wealth and unfairness from the money-grubbing Hillary Clinton, who apparently thinks that an electrician from Sacramento or an accountant in Lansing is proof positive of structural inequity in a way her hedge-fund-profiting daughter and son-in-law, or her own $300,000, price-gauging 30-minute lectures at public universities are not. Likewise, the public of all races and classes is tired of quite wealthy liberals and elite people of color pontificating on television on the moral lapses of the supposedly racist middle classes — assured that these one-percenters are immune from the ramifications of their own ideologies. (Where do the Obama girls go to school? How did the Holder children fly on a government Gulfstream to the Belmont Stakes? How did Chelsea Clinton become a multimillionaire? Where do network hosts live and how much do they make? When did Al Sharpton settle his back taxes with the IRS?).

Millions of Americans do not feel necessarily that holy matrimony exclusively between a man and woman is bias. Nor do they think listening to the late historian Shelby Foote or watching Lee, Longstreet, and their Confederate flags on Ken Burns’ Civil War constitutes a moral felony. They know also that liberal outrage is selective: Star Trek reruns won’t be pulled because gay George Takei (“Mr. Sulu”) is an abject racist [6] and on record as such. We won’t ask octogenarian William Shatner (“Captain Kirk”) to disown him. Spike Lee is a praised filmmaker, whom we forgive for peddling on film lies about the death of Malcolm X [7] and who sicced the mob on the home of the wrong George Zimmerman [8] in his quest for vigilante justice.

Amid all this leftish high-fiving about court decisions and executive orders, we forget political and electoral reality. Barack Obama has done more to destroy liberal political power in the Congress and in the statehouses than any Democratic politician since the 1920s. His executive orders and neglect of enforcing existing law have green-lighted the executive power of the next Republican president in a way that Richard Nixon could hardly imagine. He has discredited the idea of a disinterested media to such a degree that its biased audits of the next future Republican administration will be seen as laughable.

Europe and the United States are seeing glimpses of the ultimate leftist trajectory — a mixture of Greece and Detroit, de facto non-enforcement of the law, the Iranian nuke deal, a new McCarthyism, and race, class, and gender hatred — and are becoming afraid and perhaps appalled. A growing number of people sense that 21st century leftist elites are not pragmatic working people, but a privileged sect that callously experiments with other people’s lives on the understanding that they are insulated and immune from the inevitable disasters that follow from their own ideas.

A great pushback is awakening here and abroad, but its timing, nature, and future remain mysterious.

[2] the cause is again public exhaustion with hypocrisy: http://pjmedia.com/tatler/2015/07/05/sanctuary-from-what/

[7] about the death of Malcolm X: http://www.breitbart.com/big-hollywood/2015/06/29/there-is-no-moral-difference-between-malcolm-x-and-gone-with-the-wind/

[8] of the wrong George Zimmerman: http://pjmedia.com/eddriscoll/2012/03/28/couple-who-fled-home-after-spike-lee-tweet-hires-law-firm/

30 thoughts on “Is the World Becoming Fed Up?”