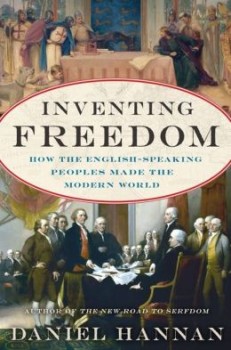 The fundamental incoherence of multiculturalism comes from its cultural relativism that posits no one way of life is better than another, but then singles out the West as a uniquely oppressive global villain. Even more contradictory, at the same time that multiculturalists slander the West for its alleged crimes, they praise and promote political and social ideals––democracy, freedom, equality, and law-based justice–– that flourish only in the West. This cognitive dissonance is made possible by massive historical ignorance of just where such ideas originated and developed. The great value of Daniel Hannan’s Inventing Freedom lies in its recovery of that history, and the role that the “Anglosphere,” the English-speaking countries, played in recognizing and nurturing those ideals for over 1500 years.

Hannan is a writer, blogger, and currently the Conservative representative of Southeast England in the European Parliament, where he vigorously monitors and battles the dirigiste excesses and autocratic impulses of the European Union functionaries. He is also a stalwart friend of the U.S., a throwback to the days when the “special relationship” between Britain and the U.S. was instrumental in turning back the fascist, Nazi, and communist assault on everything that comprises the liberal democratic ideals universally admired and imitated, even by those illiberal regimes who must pay lip-service to democracy and freedom even as they work to subvert them. Readers will find in Inventing Freedom an immensely readable, clearly argued survey of those ideals, the history in which they struggled to survive, and the great heroes whose sacrifice and commitment to them ensured that we enjoy them today.

First Hannan defines the core political ideals and virtues that create the bonds between England and America, the Anglosphere’s most spectacular success story. “Elected parliaments, habeas corpus, free contract, equality before the law, open markets, an unrestricted press, the right to proselytize for any religion, jury trials” all find their modern origins in England, from where they have spread not just to America, but to the whole world, along with the English language and its rich vocabulary that makes for precise, concrete expression. Protestantism is another inheritance from England that shaped the political order and mores of the United States. The notion that individuals can read scripture unmediated by a hierarchical, centralized authority reinforced the bond between religious and civic freedom, both of which are predicated on individual freedom and equality. “Free speech, free conscience, and free parliaments”––Protestantism, Hannan argues, was the guarantor of all of them. Finally, the principles of the American Revolution codified in the Declaration of Independence were seen by the Colonists as theirs by right as Englishmen, for they were grounded in the common law, Magna Carta, and the English Bill of Rights created by the Glorious Revolution of 1689. Hannan reminds us that the Colonists did not understand “revolution” as the destruction of the old and the creation of the new, as would happen in France and later Russia, but rather as a “turn of the wheel” to restore traditional political rights and institutions that had been violated by a tyrant.

Hannan traces the history of these political ideals and beliefs from their origins in the tribal assemblies of the Germanic tribes that settled in England, to their most dominant expression in the United States. Critical in this development is the notion of “common law,” the idea that laws come not from the needs or caprices of rulers, but exist “as a folkright of inherited freedoms that bound the King just as surely as it bound his meanest subject.” Such laws evolve organically through time and become traditions that reflect generations of human experience and collective wisdom. Trial by a jury of peers, the presumption of innocence, property rights, and free contract also are buttressed by common law, and protect individuals and communities from the depredations of the more powerful.

Next, common law holds that “anything not expressly prohibited is legal,” and so citizens do not have to solicit the permission of government agents or authorities for their actions. These and other developments all reinforce the notions of individual self-reliance, responsibility, and agency over one’s own life that have contributed to the incredible success of the Anglosphere in creating free-market economies and unprecedented prosperity. These ideals also lead to the notion that even a king rules only by the consent of the people, who retain the right to petition or question the king about his behavior, a development codified in 1215 in the Magna Carta. “For the first time,” Hannan writes, “the idea that governments were subject to the law took written, contractual form,” and the Magna Carta became “the foundational charter of Anglosphere liberty.”

The story Hannan tells with wit and verve may look in hindsight as if it was preordained to succeed, as it has so spectacularly. But over the centuries these ideals had to battle alternatives borne by alien invaders like the Normans, or arising internally from the sectarian conflicts that followed the wars of religion or the “cousins’ war” between the Colonies and England sparked by George III’s tyranny. Yet through all this disorder and conflict the core ideals, carried in the hearts and minds of the people and transmitted through their common tongue and traditions, survived. And they created the “shared values” of today’s Anglosphere: “parliamentary supremacy, the rule of law, property rights, free trade, religious toleration, open inquiry, meritocratic appointments, representative government, control of the executive by the legislature, individual liberty.”

Moreover, Hannan stresses that all these boons are not tied to race or ethnicity, but can be embraced by any people. His discussion of India and its evolution into the world’s largest democracy illustrates his point that “Anglosphere values had been developed in a multiethnic context, that they had been transmitted through intellectual exchange rather than gene flow.” Here Hannan challenges one of the great lies of multiculturalism, which traffics in the bankrupt Marxist-Leninist smear-terms “colonialism” and “imperialism” in order to tarnish the Anglospheric legacy as a racist, exploitative imposition of alien values on innocent, dark-skinned “others.” On the contrary, the freest and most prosperous places outside the West are those like India, Singapore, and Hong Kong that have been shaped by the ideals of the Anglosphere.

This legacy of freedom and autonomy, however, has been eroding over the last decades, and the forces of destruction have come mostly from within. As Hannan note, “History has become a hierarchy of victimhood.” National and cultural pride in the achievements of the Anglosphere is considered bad form mainly because of its global dominance and success.  Such pride risks “the appearance of complacency or jingoism,” or evokes “supposed cultural imperialism or colonial arrogance.” Also, virtues like tolerance or seeing other peoples’ point of view have degenerated into “if not exactly self-hatred, certainly a form of cultural relativism in which the unique achievements of Anglosphere civilization are devalued.” Trickling down from the intelligentsia into the curricula of schools, such ideas cultivate guilt rather than pride, and a refusal to judge the dysfunctions of other cultures even as we obsess over the alleged crimes of our own. “As we lose sight of what the Anglosphere has achieved,” Hannan warns, “we risk losing the institutions that have served to make it what it is.”

Indeed, this process is well underway. England’s participation in the European Union has subjected it to the heavily regulated, top-down intrusive management of politics, culture, and the economy precisely the opposite of the ideals of individual autonomy and local government that have shaped the Anglosphere. And here in the U.S., the Obama administration and the progressive Democrats have tried to duplicate the E.U. model in everything from the slow-motion debacle of Obamacare, to the foreign policy of guilt, apology, and retreat masked by the magical thinking of “multilateralism” and “diplomatic engagement.” A federal Leviathan managed by a technocratic elite is a repudiation of everything that defines the Anglosphere and has made it the freest, most prosperous, and greatest force for good in history.

Hannan ends with a quote from a young Bostonian doctor named Joseph Warren as in 1775 he rallied his countrymen to defend the freedoms trampled by George III: “You are to decide the question on which rest the happiness and liberty of millions of unborn. Act worthy of yourselves.” We need to heed this advice, and Daniel Hannan’s rich history of our freedom is a good place to discover the unique worthiness of our civilization.

5 thoughts on “Inventing Freedom. How the English-Speaking Peoples Made the Modern World”