She’s weighed down with negatives, but do the Democrats have a choice? 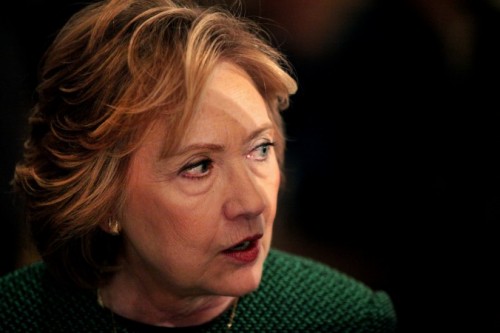 Hillary Clinton will not run in 2016 on the slogan of continuing the hope-and-change policies of Barack Obama. The president has not enjoyed a 50 percent approval rating since a brief period after his reelection. And he is no friend of the Clintons.

Abroad, chaos in the Middle East, failed reset with Russia, leading from behind in Libya, and the deaths in Benghazi are no more winning issues than are, at home, the Obamacare fiasco, $9 trillion in new debt, and the alphabet soup of the AP, IRS, NSA, and VA scandals.

The Democratic party has also radically changed in just the six years Barack Obama has been in the White House, as it suffered the greatest losses in Congress since the 1920s. Other than hoping for a serious Republican scandal, the Democrats can only cling to two assumptions. One is historic voter turnout by minorities. The second is bloc voting on the basis of racial and gender solidarity.

If there is insufficient turnout, or if groups do not vote in lockstep on the basis of their racial or sexual identities, then — witness the 2010 and 2014 elections — Democratic candidates can get walloped.

A paradox arose in Obama’s efforts at encouraging bloc voting. To galvanize groups on the basis of their race, tribe, or gender, the Obama cadre has resorted to divisive language  — “punish our enemies,” “nation of cowards,” “my people” — that turns off independent voters and even some liberal white voters. When the president weighed in during the trial of the “white Hispanic” George Zimmerman by telling the nation that if he had had a son, that boy would have looked like Trayvon Martin, such an eerie tribal appeal bothered at least as many Americans as it may have stirred. Blacks and Latinos may appreciate Eric Holder’s constant sermonizing about white prejudice or Obama’s riffs on Skip Gates and Ferguson, but just as many other Americans do not believe that Gates was singled out on the basis of race and do not see how the thuggish Michael Brown, who had robbed a store and rushed a police officer, could conceivably become a civil-rights hero.

More importantly, there is no indication that Obama’s knack for firing up minority voters is transferrable in the same measure to other Democratic candidates such as Hillary Clinton. Once one appeals to tribal identity on the basis of race and appearance, one lives or dies with such superficial affinities. Hillary, in other words, is not Latino or black, and her winning 60 percent of the former or 85 percent of the latter would simply not be good enough under the formulaic racial bloc voting that Obama has bequeathed to Democrats. In addition, Obama seems to bestow voter resentment, as much as he does enthusiasm, on other Democrats. In 2014, it seemed that Obama harmed Democratic candidates a lot more than he helped them, especially when he reminded the electorate that his own policies were de facto on the ballot.

Nor are Obama’s bread-and-circuses issues catching on. Most Americans believe that the era of adolescence is over, and the next president will have to be an adult who puts away the golf clubs and ESPN monitors to clean up what will be $20 trillion in debt and a collapsed foreign policy. The public seems to accept that taxes can’t go much higher. No one thinks that borrowing trillions was a sign of government austerity. Too many, not too few, Americans appear to be hooked on entitlements. The borders are too porous, not too well guarded. Spiking the stock market was not the same as creating well-paying middle-class jobs. More gas and oil came despite, not because of, Obama.

What, then, is Hillary Clinton’s strategy for 2016?

Once again, mostly symbolism. Apart from Hillary and the idea of the first female president, the Democrats have little to turn to — which explains why Hillary may well be nominated even if her health and inclinations — and her disastrous performances — lean against it.

What won Barack Obama the presidency in 2008 was public anger over the Iraq war, fear following the 2008 Wall Street meltdown — and his own iconic status as potentially the first African-American president. Had the surge in Iraq succeeded a year earlier, or had the financial markets not crashed, or had the Democrats nominated a Joe Biden or a Howard Dean, then they probably would have lost the presidency.

Unfortunately for them, however, in 2016 there will be no incumbent Republican administration to scapegoat. “Bush did it” is now stale after six years. Blaming the Tea Party or the Republican House is likewise old hat. There is no success story to bandy about — no desire to bring on another Libya or expand Obamacare or borrow another $9 trillion.

There is only the war-on-women mantra that it is past time for a female president and Hillary has the best shot at making it. She is counting on the idea that blacks and Latinos will turn out for her as an icon of oppressed minorities in the manner they did for Obama, and that white working-class voters will forget the Democratic racial and gender pandering that is so often implicitly aimed against them.

On the face of it, the idea of Hillary Clinton as a feminist trailblazer should be ludicrous. Forty-four women have already served in the Senate since the first one did 93 years ago. When Hillary took over as secretary of state in 2009, there had not been a white male secretary since 1997.

Unlike national female politicians like Sarah Palin and Carly Fiorina, Hillary Clinton gained public exposure only by virtue of marriage to the powerbroker governor and then president Bill Clinton. Implicit in her messaging is a return to Bill Clinton’s economic good times of the 1990s and the implication that he might well be running half the show — a subliminal and quite sexist message.

Take away the Clinton name, and Hillary Rodham would be no more likely to become president than would Democratic senators like Barbara Boxer and Barbara Mikulski. In her own public and private life Hillary Clinton has had few feminist credentials beyond her self-promotion. She never insisted on pay equity for her female staffers while senator. She did not object much when her husband’s political operatives sought to destroy the reputations of the women with whom he had liaisons — Juanita Broaddrick, Gennifer Flowers, Paula Jones, Monica Lewinsky, Kathleen Willey — some of whom made powerful cases that they had been coerced into sexual encounters and then sullied and derided when they complained. For Hillary, if it was a question of believing that her husband had inappropriately solicited sex with a female subordinate or an otherwise vulnerable woman, or ensuring that her own meal ticket was secure, the choice was always a no-brainer.

Hillary has never been a very inspiring candidate. She is petulant when pressed, and appears at once bored and angry when cross-examined. Her stump speeches can be best characterized as high-pitched and punctuated with shrillness.

She does not so much habitually lie, as habitually see no problem with lying, as if she either cannot distinguish untruth from veracity, or simply believes that normal expectations of conduct should not apply to herself. Her mea culpas about the e-mail scandal were historic in that not a single declaration that she made could possibly be true: One does not need two smartphones to have two e-mail accounts; Ms. Clinton uses not just one but, by her own admission, four smart communication devices. The physical presence of security guards does not ensure a server’s security from cyber attacks. Bill Clinton does not use e-mail, and thus Hillary could not have communicated with him by that means as she claimed.

In sum, the Democrats have neither a winning agenda nor someone to blame this time around. They are stuck with only symbols and icons — and this time shaky ones at that. In 2016, choosing any candidate other than the potential first woman president would be as futile as running Joe Biden in 2008 instead of Barack Obama as the potential first African-American president. There would be no icon, not even a small chance of massive minority turnout, and certainly less bloc voting on the basis of tribe. In other words, for the Democrats, 2016 would hinge on just defending the Obama record and the principles of liberal theology — and thereby probably falling short on election day. It is either the worn-out idea of Hillary, warts and all, as both victim and trailblazer — or bust.