By Victor Davis Hanson // Works and Days by PJMedia

In a September 2007 congressional inquiry about the ongoing surge in Iraq, then Senator Hillary Clinton all but called Gen. David Petraeus a liar. After Petraeus gave a cautiously optimistic—and prescient—appraisal of the growing quiet in Iraq, Clinton curtly dismissed him with the literary term “suspension of disbelief,” which describes the creation of a fantasy world. 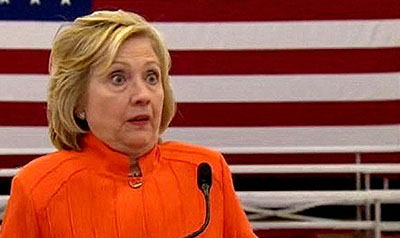 Clinton sarcastically rebutted Petraeus’s quite accurate data with the curt dismissal, “I think that the reports that you provide to us really require the willing suspension of disbelief.”

But Iraq was no make-believe place. Petraeus went on to quiet Iraq and it stayed that way until President Obama, with eyes on the 2012 election, yanked all peacekeepers out in December 2011—with the full support of Hillary Clinton.

In ironic fashion, Hillary’s own vocabulary best describes her conduct. A “willing suspension of disbelief” most aptly sums up Hillary Clinton’s disastrous 2016 primary campaign, which so far seems more disastrous than her 2008 disastrous campaign.

This time around, she is again blowing a huge lead in the polls, but not to an inexperienced, charismatic young African-American trailblazer. Instead she is neck and neck with a white 74-year-old socialist from Vermont who wants to make college free and up taxes to a 90% rate.

To trump Sanders, Clinton has reinvented herself into an anti-Wall Street populist. Suspend disbelief that she and her husband, former President Bill Clinton, in just a 16-month period made over $25 million in speaking fees, largely from corporations with Wall Street ties.

Hillary alone pulled in $675,000 from Wall Street firms. When pressed about such exorbitant fees, Mrs. Clinton shrugged, “That’s what they offered.”

To believe that quip requires even more suspension of disbelief. If Clinton were truthful, she might have said something like, “That’s what my agents negotiated from financiers who knew exactly what they were getting in offering me such a ridiculously huge sum”

As Clinton pointed out, there are lots of former cabinet secretaries who make lots of money for speaking. But what she did not point out was that none matched Clinton’s speaking charges ($200,000 and up for 30 minutes), because none were at the time all but running for president with the specter of patronage and political leverage to sell.

Mrs. Clinton does not wish anyone to know what she actually told Wall Street to earn her millions. Like Mrs. Clinton, I have given hundreds of lectures, public and private, in the last 30 years. Unlike Mrs. Clinton, I have no objection to anyone taping them or releasing a transcript. The suspicion grows that privately Clinton has assured them she will promote a Bill Clinton-like deregulatory climate, and that’s why they continued to pay her exorbitant sums, and why now they still donate and don’t pay much attention to her faux anti-Wall-Street populism.

Or perhaps in Donald Trump style, Hillary is reassuring her leftwing base that it takes a Wall Street profiteer to know how to fight Wall Street buccaneers. Or maybe she is following Barack Obama’s path in being the first presidential nominee to refuse public campaign financing in order to become the largest candidate recipient of Goldman Sachs cash in history.

Recent news reports daily detail how former Secretary of State Clinton’s private emails—contrary to her early serial assurances—contained far more than just ordinary classified material. She sent communications of such a sensitive nature that they now cannot even be read by most government officials.

Mrs. Clinton, however, has demanded that these classified documents be released to the public. That gambit, she believes, will prove that she did not send anything top secret at all!

That con too requires a suspension of disbelief. Mrs. Clinton knows full well that it would be illegal for any official to release a highly classified document to the public. She is merely angling for a cheap talking point along the lines of, “I wanted to show the American people how innocent my emails were, but ‘they’ wouldn’t let me and covered them up.”

During the Benghazi scandal, Mrs. Clinton all but called the families of the four dead Americans liars. They had recalled that at the arrival of the bodies of their loved ones, she blamed the violence not on al Qaeda but on an obscure video maker. That myth conveniently fit the 2012 Obama reelection narrative that al Qaeda was “on the run” and not on the loose in Benghazi.

If we did not suspend disbelief about most of Mrs. Clinton’s claims, we would trust that all her grandparents were immigrants, that she was named after the explorer Edmund Hillary, that she braved gunfire in Serbia, and that after reading the Wall Street Journal she learned how to invest $1,000 in cattle futures and quickly earn $100,000 in profits.

To believe anything Hillary Clinton asserts requires a willing suspension of disbelief.