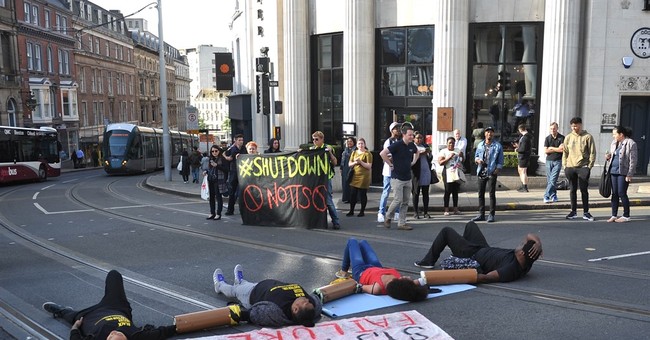 The Greeks gave us tragedy — the idea that life is never fair. Terrible stuff for no reason tragically falls on good people. Life’s choices are sometimes only between the bad and the far worse.

In the plays of the ancient dramatists Aeschylus and Sophocles, heroism and nobility only arise out of tragedies.

The tragic hero refuses to blame the gods for his terrible fate. Instead, a Prometheus, Ajax or Oedipus prefers to fight against the odds. He thereby establishes a code of honor, even as defeat looms.

Life must always be fair. If not, something or someone must be blamed. All good people deserve only a good life — or else.

A nation of victims soon becomes collectively paralyzed in fear of offending someone. Pay down the $20 trillion debt? Reform the unsustainable Social Security system? Ask the 47 percent of the population that pays no income tax to at least pay some?

Nope. Victims would allege that such belt-tightening is unfair and impossible — and hurtful to boot. So we do nothing as the rendezvous with financial collapse gets ever closer.

Does anyone think a culture of whiners can really build high-speed rail in California? Even its supporters want the noisy tracks built somewhere away from their homes.

Even animals get in on the new victimhood. To build a reservoir in drought-stricken California means oppressing the valley elderberry longhorn beetle or ignoring the feelings of the foothill yellow-legged frog.

Not today’s therapeutic college youth. They have been so victimized by racism, sexism, homophobia, Islamophobia and other -isms and -phobias that colleges often provide them “safe spaces,” outlaw “microaggressions” and demand “trigger warnings” to avoid the un-nice.

What would our grandfathers think?

As teenagers on D-Day, they found no safe spaces on Omaha Beach. A storm of steel from thousands of SS killers proved more than a “microaggression” at the Battle of the Bulge. Generals did not give their freezing GIs mere “trigger warnings” about a half-million Chinese Red Army soldiers crossing the Yalu River during the Korean War.

American victimhood is the luxury of an affluent, secure and leisured postmodern society that can afford such silly indulgences.

Second-string San Francisco 49ers quarterback Colin Kaepernick apparently assumes that his wealthy team can afford to pay him nearly $20 million a year to sit on the bench, without much caring that he can’t be bothered to stand up for the National Anthem.

But victimhood is a good career move. Kaepernick went from being a washed-up quarterback to being a much-publicized social justice warrior — a veritable Noam Chomsky in cleats opining on over two centuries of American criminal justice. He was once fined for reportedly smearing a fellow NFL player with the N-word, but now as a victim himself, Kaepernick can no longer be a victimizer.

During the first presidential debate, Hillary Clinton blamed Donald Trump for body-shaming 1996 Miss Universe Alicia Machado two decades ago. Machado had reportedly gained more than 40 pounds and apparently made it hard for Trump’s beauty pageant to showcase her figure in promotional events.

America may be broke and plagued by riots and terrorism. No matter: It apparently can afford to fret over Machado’s 20 years of post-traumatic stress.

Once victimhood is established, we lose our identities and, as part of an offended collective, claim blanket exemption for all our imperfections.

In Machado’s case, what does it matter if such a victim allegedly threatened a Venezuelan judge, or was reportedly involved with a drug cartel leader, or became a campaign shill for the Clinton campaign?

All of that is nothing compared with the trauma of being called fat for not being able to fit back into the bikini that won her the Miss Universe crown and fame.

Sometimes the art of victimhood gets confusing. If we are all victims of some sort, who are left to be the victimizers?

Can victims victimize? Can gays be Islamophobic, Muslims homophobic, blacks racist, women sexist or Latinos xenophobic? If so, who is to sort out their relative rock/paper/scissors zero-sum grievances?

Unfortunately, Russian President Vladimir Putin, the Islamic State and the Chinese have no particular sympathy for any American who lays claim to victim status.

Nor do foreign buyers of U.S. Treasury bonds to finance the debt defer to America’s legions of victims. A nuclear bomb from North Korea or Iran will not sort us all out by race, class or gender, much less by victim and victimizer.

To appreciate American heroism, we might read Sophocles’ “Antigone” or E.B. Sledge’s “With the Old Breed” — and watch a lot less Sunday football.