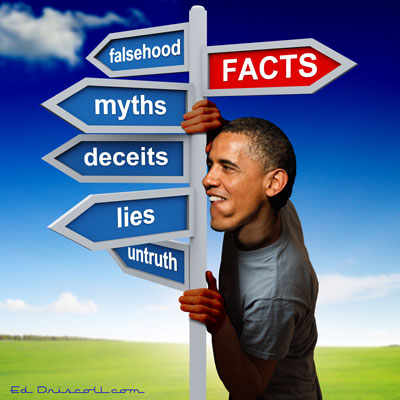 It was tragically comical that the commander in chief in just a few weeks could go from referring to ISIS as “jayvee” and a manageable problem to declaring it an existential threat, in the same manner he upgraded the Free Syrian Army from amateurs and a fantasy to our ground linchpin in the new air war. All that tragic comedy was a continuance of his previous untruths, such as the assurance that existing health plans and doctors would not change under the Affordable Care Act or that there was not a smidgeon of corruption at the IRS.
But lately the Obama confusion has descended into the territory not of tragedy or even tragic comedy, but rather of outright farce.

Last week we learned from the Washington Post that an investigator looking into the Secret Service prostitution scandal [1] was ordered by the inspector general “to withhold and alter certain information in the report of investigation because it was potentially embarrassing to the administration.” The “embarrassing” information was the allegation that a member of the White House staff advance team had solicited a prostitute while prepping Obama’s Colombia visit [2] — a fact denied by then-White House Press Secretary Jay Carney [3] in April 2012, when he assured the press that no one from the White House was involved in the scandal that brought down lots of Secret Service and military personnel.
But here is where the farcical kicks in. The squelched investigation was focused on White House staffer Jonathan Dach. And who is Dach? He was at the time a young Yale law student and White House staffer, and is now a State Department activist working on — what else? — “Global Women’s Issues.”
And how did young Jonathan Dach at the ripe age of 25 years land such a prestigious job as a presidential advance man? His father, Leslie Dach, was a lobbyist who gave the Obama campaign $23,900 and was later hired on to work with Michelle Obama’s “Let’s Move” campaign. And, of course, Leslie Dach now has left his job lobbying for Wal-Mart. And where does he work now? For the Obama administration. Promoting what? Obamacare.
Here is the essence of the Obama administration’s abyss between word and deed: in the age of the war on women and the end to lobbyists in government, the feminist young aide is alleged to have solicited a prostitute; the most transparent administration in memory covered that fact up during the reelection campaign; the president who promised to end the revolving door and ban lobbyists from government hired not just a one-percenter lobbyist and donor, but his randy son as well.
Can it get much richer than that? Unfortunately, it can — literally, as we’ll explore on the next page.
Recently, Barack Obama offered yet another fundraiser to his small circle of billionaires at the 20-acre gated estate of — again, this is no joke — Rich Richman [4]. Some of Richy Rich’s bundled donors paid over $32,000 to see and touch Obama, who lectured the assembled Connecticut one percent of the one percent. And what did he lecture them on? Of course on “billionaires” and their mean war on the middle class.
Not long ago President Obama flew into Fresno, Ground Zero of the California drought. Did he offer federal help for more dam, canal, and reservoir construction? Hardly [5]. Did he offer to help build coastal desalination plants? Nope.
Instead, he gave a brief lecture about global warming and offered $160 million in aid to ameliorate its effects, although almost all California climatologists associate the state’s unusual three-year drought with oceanic and atmospheric conditions unrelated to climate change, especially given the fact that the planet at large has not heated up in the last 18 years.
After briefly stopping in Fresno for a few hours, where did Barack Obama go next to emphasize the global-warming roots of our drought, and the irrelevancy of building more storage space to mitigate the atypical absence of snow and rain?
Naturally, he jetted in to see Jordan’s king at one of the most artificial environments in the world — verdant Rancho Mirage in the scorching Palm Springs area desert, an artificial landscape entirely irrigated through vast manmade water transfers via canals from the Colorado River. And why did Obama detour to such a landscape incongruous with the drought-stricken state? To play more golf, reminding us that while new reservoirs are not needed, and while burning carbon fuels is the culprit, golf courses in the middle of deserts are perfectly natural destinations for climate-change believers who arrive on huge jets to putt on irrigated greens for a few hours. Rumors then flew [6] that Obama so liked Rancho Mirage’s drought-proof, irrigated attractions that he pondered retiring at a gated estate there.
Why such farce? We have forgotten two truths about the Obama administration. No president in recent memory has so hectored the American people on the dangers of elites, and no president in the last half-century has so enjoyed the perks and culture of the elite. Unfortunately, this is not just mindless hypocrisy, but rather calibrated medieval exemption: the more Barack Obama berates the high life of others, the more he feels he deserves it for himself.
Article printed from Works and Days: http://pjmedia.com/victordavishanson
URL to article: http://pjmedia.com/victordavishanson/from-comedy-to-farce/
URLs in this post:
[1] the Secret Service prostitution scandal: http://www.nationalreview.com/article/390001/cartagena-hooker-cover-jonah-goldberg
[2] while prepping Obama’s Colombia visit: http://www.steynonline.com/6593/the-return-of-the-cartagena-hooker
[3] then-White House Press Secretary Jay Carney: http://pjmedia.com/eddriscoll/2014/10/11/cnn-keeps-the-cartagena-hookers-under-wraps/
[4] Rich Richman: http://www.powerlineblog.com/archives/2014/10/with-rich-richman.php
[5] Hardly: http://pjmedia.com/eddriscoll/2014/08/16/question-asked-and-answered-20/
[6] Rumors then flew: http://www.latimes.com/business/realestate/hot-property/la-fi-hotprop-not-barack-obama-20140826-story.html

9 thoughts on “From Comedy to Farce”