College football players are gladiators of sorts. On the one hand, they are vastly underpaid for the risks they take as well as the profits they generate for the university and the scores of jobs they subsidize. On the other, in terms of college protocols, they are pampered and exempt from rules that other students follow. Being exploited and privileged is a bad combination. 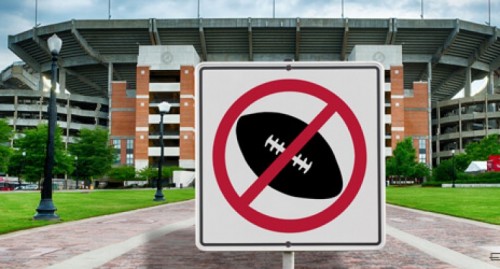 For half a century, liberals have pointed out that football players should drop the amateur pretense, join a semi-pro club, and make the money they deserve — given that their admissions, grades, and class attendance are exempt from university rules, and warp the college experience. Why do we treat as a privileged class those who so often do not meet university requirements that are non-negotiable for mostly indebted students without recourse to such lavish scholarships and subsidies? Entire majors, curricula, counseling, and protocols were invented simply to free football players from having to be students.

Athletes are also exempt from the new liberal policing.  The university campus has grown into a scary place, given the Maoist tendencies to go after race/class/gender enemies of the people. But no institution is more guilty of such politically correct crimes than is the football team.

The majority of the African-American players on the University of Missouri team threatened to boycott their next game, unless campus diversity demands were met, including quotas to ensure more black representation on the faculty and staff.

But why then would the football team be exempt from its own ideology?  Did the players assume that their money-generating power made them far more important than the English Department or counseling staff? Did they think they were akin to nuclear plant operators and jumbo jet pilots — or the Democratic primary field — whose tasks are professed as far too important to be adjudicated by non-meritocratic criteria?

Nearly half of the University of Missouri’s players are African-American, four times greater than the black percentage of the general population.

Under the Obama administration’s dictates of proportional representation and disparate impact, publicly funded institutions must ensure racial diversity, even if they are not proven to practice discrimination.