Robert Gates’s insider memoir is the latest in a dishonorable genre.

For all the hysteria over former defense secretary Robert Gates’s new insider memoir of his tenure during the Bush and Obama administrations, the disclosures are more breaches of trust than earth-shattering revelations. Much of Duty: Memoirs of a Secretary at War is the ordinary stuff of public service. 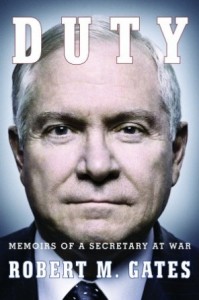 What little gossip in the book there is that may be controversial — revelations that both Senators Hillary Clinton and Barack Obama cynically opposed the successful Bush-era surge in Iraq on political grounds, or that Vice President Joe Biden is a buffoonish blowhard — was already common knowledge to many Americans.

Gates sees himself as reluctantly drawn to Washington to help rescue the fading Bush administration’s unpopular wars in Iraq and Afghanistan. In 2009, he grudgingly stayed on at the Defense Department, apparently to add some sobriety to an at times comically inexperienced new Obama team.

There is a long tradition of retired court insiders revealing unflattering details about their bosses before they leave office — and it is not uplifting. The Roman court insider Petronius thought he could get away with caricaturing the buffoonish emperor Nero through his racy novel The Satyricon. He didn’t, and was forced to commit suicide as a result.

The problem with the genre of the tell-all is that there are lots of paradoxes that usually make it a lose/lose proposition for even the most sincere truth-teller.

If things were so bad that an astute insider had to leave government and spill the beans on his superiors while they still were in power, why did he go to work for such suspect people in the first place? Why stay so long on such an unpleasant job?

If Gates confesses that he never really enjoyed the return to the Washington meat grinder, then readers wonder why he was surprised at the cynical careerism that he predictably found.

In our era of progressive-media dominance, memoirs about sitting Republican presidents are usually treated as courageous examples of speaking truth to power. The partisan press praised the cheap tear-down of the Reagan administration by the likes of departing Cabinet members Donald Regan and Alexander Haig.

In the last George W. Bush administration, when disgruntled high-level appointees like Richard Clarke, Lawrence Lindsey, Paul O’Neill, Scott McClellan, and Christine Todd Whitman penned self-serving criticisms of a sitting president and his team, the press hailed them as brave souls who put public duty over their careers.

Try that with a liberal president like Bill Clinton, and suddenly the insider tell-all — whether by Dick Morris, Robert Reich, or George Stephanopoulos — is seen at best as naïve and ill-timed and at worst as the whining of a sore loser opportunistically trying to settle scores all the way to the bank.

Should Gates really be surprised that both the media and White House are questioning the motives behind the second half of his memoir on the Obama administration?

Letting the public know about the most intimate trivia of the executive branch raises another paradox. No one wants to read about the boring minutiae of most Cabinet meetings, even if that is what administration officials mostly endure. So instead it is the rarer juicy stuff we flip pages to read about: bureaucratic backstabbing, profanity-laced temper tantrums, or the weird habits of foreign leaders. But aren’t those less common revelations precisely what the world would be better off not knowing about until well after an administration is out of power?

In the Gates memoir, the spicy tidbit that French president Nicolas Sarkozy dismissed the Iranians as inveterate liars makes for livelier reading than another Pentagon budgetary squabble. Yet are such disclosures all that wise, when the U.S. is now in the midst of critical multi-state negotiations over Iran’s nuclear ambitions?

Gates writes that he was dismayed about leaks during his tenure as defense secretary. How does he think the Obama administration feels about his own breach of confidentiality that raises questions about Obama’s sincerity and competency?

The motives behind the tell-all must often be considered suspect. The author must insist that he risks controversy only because he wants the public to know information critical for the survival of transparent democratic governance — especially information related to the abuse of power.

Yet instead, the media hype only the racy nuggets. With publicists booking the insider author on every conceivable news show, hoping to offer up gossip and jump-start a moneymaking best-seller, can Gates be surprised that critics wonder why he wrote his memoirs now, rather than waiting for Obama to leave office and the limelight?

The irony with Duty is that Gates is an honorable man who served his country effectively and admirably, but he wrote an insider account of a sitting president that belongs to a tired, dishonorable genre.