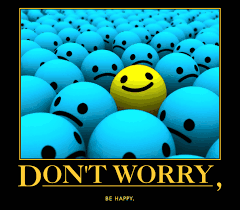 In his 1988 presidential race, George H.W. Bush was trashed by the left for selecting the Bobby McFerrin hit “Don’t Worry, Be Happy” as his campaign song. Maybe Bush thought he needed a lighthearted optimistic echo of Reagan’s 1984 mantra, “It’s morning in America.” [1]But the Left thought the ditty confirmed the image of a callous and vacuous Bush who didn’t “worry” enough about the poor and minorities. The liberal McFerrin was outraged that Bush sought to play his own song at rallies. Shortly afterwards, “Don’t Worry, Be Happy” was quietly dropped by the Bush team.

Perhaps no other slogan better characterizes the Obama tenure.

America is relieved that things at least appear calm, as war and death rage abroad. At almost every critical juncture, the administration chose short-term happy talk in lieu of worries over long-term consequences. No matter how frequent the disasters abroad, Obama can proclaim the world is at peace in an unprecedented age of stability and security.

We did not lose a soldier in the bombing of Libya. Only an ambassador and three U.S. personnel were killed in the aftermath. As Hillary Clinton put it: “What difference does it make?” Indeed, of Libya, she also chuckled [2]: “We came; we saw; Khadafy died.”

That Libya is now a terrorist beheading hellhole on the Mediterranean is someone else’s problem at some future date. The bombing of Khadafy may have been the first time in U.S. history that we bombed an autocrat out of power without staying around on the ground to thwart the ensuing and inevitable chaos.

Was that “smart” diplomacy?

Remember “reset”? What happened to it? Did it die in Crimea or Ukraine? For nearly four years, from a plastic reset button to cancelled missile defense with the Czechs and Poles (how prescient that anti-Iranian initiative of George W. Bush now seems in light of the current talks), we were told how Obama and Hillary Clinton had undone the damage that Bush had inflicted on Russian-American relations.

Then, after serial Putin aggression, only silence followed.

There has not been a peep from the administration about the fate of “reset,” much less about the long-term consequences of appeasing Putin for four years. I think the Obama strategy is to keep quiet about the disaster, hope that it takes Putin some time to digest Ukraine, and then leave Putin’s agenda in the Baltic states to the next president.

Why worry about Iran? They promise not to make a bomb for a decade. Translated, that means that Obama (“I don’t bluff”) envisions more laureate accolades for getting out of office ahead of an Iranian nuke, and woe to the president who follows.

Pulling all U.S. peacekeepers out of Iraq at the end of 2011 proved a useful short-term campaign talking point [3]. But the ensuing vacuum birthed the “jayvees” of ISIS, who probably also have a rendezvous with the next president. Why should anyone in Malibu worry about Tikrit or the impending fall of Ramadi, or how a new, low-grade caliphate might remake the Middle East?

Issuing various red lines and deadlines [4] to the Syrians and Iranians sounded tough at the time, but at some future date an American president is going to have to reestablish — at some cost — the authenticity of an ultimatum by the president of the United States.

But for the short term, Americans were collectively relieved that Obama proved a gasbag and did not enforce the threats.

Leading from behind and forcing Gulf monarchies to fend for themselves is attractive to the American people, who are tired of Middle East ingratitude after 9/11 and all the machinations of the Saudi royals. But again, at some point amid the growing chaos an American administration is going to have to assemble partners to hammer out some sort of order other than Iranian hegemonies in Iraq, Lebanon, Syria, and Yemen.

When Iran, empowered by endless negotiating with the U.S., begins squaring off against the Gulf states, who really cares? I think the Obama administration message would be: “That’s oil-hungry Japan’s problem, not ours.” If only Iran were the Tea Party, and the Ayatollah Khamenei a Ted Cruz, and if only the Gulf exported wind and solar power.

Obama certainly has a genius for packaging progressive lead-from-behind escapism and empathy for anti-U.S. revolutionary regimes in such a way as to appeal to war-weary Americans in general and isolationists of all sorts.

As far as Israel goes, who cares? Forget growing rocket brigades in Gaza, no-man’s land in what used to be Syria, or thousands of missiles pointed at it from Lebanon and a soon-to-be-nuclear Iran.

There once was much Obama talk of an “Asian pivot” — apparently a muscular show of force to Pacific allies who were concerned that American talk of drastic cuts in our nuclear arsenal, and paralysis in the face of Chinese and North Korean aggression, meant they weren’t still inside the defense umbrella of the United States. In two years, those concerns will spike. A future president will have to beef up our Asian defenses, talk tough with the Chinese, and assure our allies that they neither have to go nuclear nor accommodate China.

But for now, who cares? Be happy!

There are lots of valid comparisons made between British Prime Minister Neville Chamberlain (who resigned the day Germany invaded France and the Low Countries) and Barack Obama. But one similarity does not hold. Chamberlain stayed in office too long, and suffered firsthand the consequences of his own appeasement on September 1, 1939. Obama, on the other hand, will probably be long out of office and on the global lecture tour when the wages of his policies come due in the Middle East, Russia, the Pacific, and Latin America.

The world today is stable in the sense that it was in summer of 1914 or in August of 1939 — calm before the dark clouds when any who pointed to the storms on the horizon were ridiculed as alarmist fearmongers. No one was more popular in the West than Neville Chamberlain after Munich.

Unfortunately, they who sow the wind shall reap the whirlwind. But for now, don’t worry, be happy.