Cliven Bundy spouted off racist generalizations the other day as reported by a New York Times journalist, stereotyping blacks in negative fashion, with 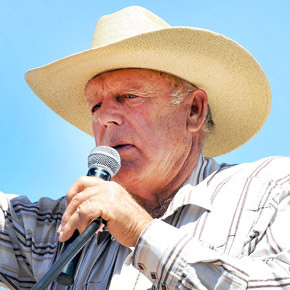 unhinged referencing to slavery — and after that in an ad hoc talk generalizing about Mexican immigrants in positive condescension.

Does that outburst prove Bundy’s resistance to a bullying Bureau of Land Management is racially driven? Or that his cattleman’s existence on the Western range is now tainted?

What are the general rules about assessing issues when the involved parties voice odious creeds?

The difference between a private life and a public career matters. If cowboy Cliven Bundy were organizing a formal resistance to the federal government by emphasizing racist doctrines, then he would be dangerous in the way Rev. Jeremiah Wright was scary in spouting racist diatribes to thousands in his congregation and on his CDs — including to the future president of the United States.

Bundy’s racist pop-theorizing is odious, but not integral to his argument over grazing rights with the federal government. A bit different was the racial hate-mongering of Rev. Wright that seemed to underpin his efforts to build and expand a church and its affiliated community-organizing movements — and drew prominent Chicagoans into his church.

If Bundy’s racism is his own, it is still regrettable and loses him personal sympathy on moral grounds. But his bigotry does not necessarily affect the issues at hand of a cattle rancher being singled out by a federal bureaucracy, in an example of selective, overreaching, and dangerous enforcement.

Last week, a cab driver in Los Angeles did a marvelous job in navigating me through traffic on the congested 405 freeway. That he shared with me (the tip was prepaid), in a well-articulated thesis, his crackpot ideas about evil conspiratorial whites creating the AIDS virus to infect blacks of the inner city was racist to the core, but his bias did not change the fact that he was one of the most skilled and savvy drivers I have encountered. I could see no connection between his Farrakhan-like racism and either his driving skill or treatment of his passenger.

There is some difference between word and deed. Does Bundy spout off repugnant nonsense, and then act on it in fact by denying African-Americans a chance to work for him? So far there is no evidence of that. Bad talk is bad; bad concrete behavior that derives from bad talk is dangerous to a society. Sometimes the two are inseparable; sometimes public actions and distasteful private sentiment can remain distinct. (See Joe Biden below).

I abhor Bundy’s views on race to the extent his ramblings were even coherent, but I also do not think he is in a position to do much about his crackpot ideas even if he wished, especially once his notoriety fades. He certainly is not analogous toL.A. Clippers owner Donald Sterling, whose anti-black racist rants are nefarious, given that he is in a position, as an owner in the NBA, to do a lot of harm to black players, coaches, and fans, and in the past has been condemned for such bias.

Bundy also clearly does not have the permanent audience of a Chris Rock (on the 4th of July, 2012: “Happy white peoples’ independence day”), Jamie Foxx (on his role in Django Unchained: “I kill all the white people in the movie.How great is that?”), or Jay-Z (sporting a medallion of the racist Five Percent Nation).

Few of Bundy’s present critics say much about the racist drivel of a Jamie Foxx or Chris Rock, and won’t when it surely resurfaces in the future. Their racist banter will reach far more people than Bundy’s, in that they were all in the last five years highly politicized public figures with substantial followings.

Also quite different from private cowboy Bundy’s low-brow rants are the racist stupidities of Vice President Joe Biden (on Obama: “I mean, you got the first mainstream African-American who is articulate and bright and clean and a nice-looking guy”), or Senate Majority Harry Reid (on Obama: “a ‘light-skinned’ African American with no Negro dialect, unless he wanted to have one”), or, for that matter,  Justice  Ginsburg (“Frankly I had thought that at the time [Roe v. Wade] was decided there was concern about population growth and particularly growth in populations that we don’t want to have too many of”), or, yes, President Barack Obama (of his grandmother: “typical white person”; and advice to Latinos: “punish our enemies”) . These racialist assertions fall into the Earl Butz category of racist buffoonery of public officials, whose racialist indiscretions reflect a far greater potential to affect our collective lives by virtue of the vast power of the offices they hold.

Then there is also the larger, more convoluted matter of history and ideas, or to what degree do we discount ideas, careers, and issues because those involved embrace odious views. We can certainly agree that the minor deconstructionistPaul de Man was a creepy fraud, given that he was a pro-Nazi activist journalist during World War II, a bigamist, a liar, and a cheat. But as much as I dismiss his nihilist criticism, I mostly despise it because it is self-indulgent, incoherent, obtuse, and ultimately meaningless — not because the author was a thoroughly repugnant person.

I don’t read Ezra Pound’s Cantos, not just because he was a fascist propagandist and traitor, but also because his poems are often sloppy and pretentious in their half-educated referencing of classical themes and quotes. Long ago, I once tried reading the Nazi sympathizer and opportunist Martin Heidegger, but to the degree that one can decipher his prose, his point seems to be largely a dressed-up relativism without the edge or historical insight of either Nietzsche or Hegel. Enoch Powell edited a handy lexicon to Herodotus; I still use it, despite Powell’s racialist views. His revised Greek text of the older Stuart-Jones OCT of Thucydides’ Greek remains valuable.

There were no better early astute assessments of the dangers of Stalinist expansionism than the essay “Sources of Soviet Conduct” authored by “X”, in reality the wizened diplomat George Kennan. Nonetheless, Kennan revealed himself in his diaries to be an inveterate racist and unapologetic anti-Semite. Take away his Atlantic coast inflections and polished prose, give him a gut and cowboy hat, and Keenan’s bigotries would appear even more extreme than Bundy’s. Does that mean his famous “X” essay is now flawed? Should we try to connect Kennan’s racist dismissals of Latinos with some sort of universal prejudice against Russians that might explain why his “X” essay now must be seen as dangerous? Maybe — but not likely.

Given that Kennan’s diaries are again in the news, do highbrows on NPR and PBS remind us what a racist and anti-Semite Keenan really was — and thus warn us of the larger dangers of sloppily identifying with ideas of Kennan’s blue-blood aristocracy known for its class and racial prejudices?

I am not a fan of Charles Lindbergh, given his dangerous anti-Semitic-tinged isolationism, but does that also mean his solo trans-Atlantic flight was any less historic? Were his courage, daring and skill a result of his personal prejudices? I doubt it.

For all his dangerous isolationist barnstorming, Lindbergh was a world away from the Waffen SS, whose anti-Semitism was central to their training and combat zeal in wiping out so-called Untermenschen. The result is that we can still admire Lindbergh’s New York to Paris bravery, but not the dogged resistance of SS divisions to the advancing Red Army, given its cause and the trail of its atrocities left in its wake.

From later revelations, Martin Luther King was probably sexist and cruel in his treatment of women and plagiarized material for his thesis. But does that mean his own suffering and his brilliant letter from a Birmingham jail are any less resonant?

Were the achievements of Earl Warren, the McClatchy papers, and FDR all to be discounted, given that the trio also cooked up the forced internment of Japanese — the majority of those rounded up being U.S. citizens? These are complex questions that transcend both those at Fox News who now offer a disingenuous sort of “I warned you about Bundy” and the liberal chorus of something like “there these Tea Party racists go again.”

I can appreciate both Cliven Bundy’s ability to carve out a cattle ranching career in the unforgiving Nevada desert, in the fashion of a lost generation of past Americans, and his argument that whatever disagreement he has with the federal government does not warrant an army of SWAT police descending on his cattle — without being responsible for his racist views of blacks and cotton picking.

I don’t think that those who sympathize with Bundy’s argument against an overweening federal government (with the necessary caveat, as I posted last week, that he has an unconvincing legal case and when it is finally adjudicated should pay any fines incurred) agree with, or care about, his world views to the extent they are even known.

What Bundy rants about solar power, gay marriage, or transgendered restrooms is of no interest to me, in regard to the issues of land use, the federal government’s ownership of 82% of Nevada, and selective enforcement of the law. The proper course is to deplore what Bundy said, but to have enough sense to appreciate that what he said does not affect the larger contradictions he raised.

Again, what is disappointing are Bundy’s former supporters who now feel betrayed and shocked by Bundy’s racist rantings, and thus also quickly seek to distance themselves from the issues he raised — without recognition that the matter was never the sayings of  Cliven Bundy, but a disappearing cowboy’s dispute over grazing rights against a federal government intent on destroying his livelihood over the pretense of a tortoise in a way not commensurate with its other applications of law enforcement.

And his critics? Most make the usual necessary ideological adjustments. Al Sharpton — former FBI informant, provocateur of lethal rioting, homophobe, anti-Semite, character assassin, deadbeat tax delinquent — is not shunned, although his bigotry is central to his career, but rather embraced by Hillary Clinton and given his own MSNBC show. The NAACP is slated in May to recognize Sharpton with a “Person of the Year” award — and had planned to give Donald Sterling a “Lifetime Achievement Award.” When public servants in positions of vast power like the attorney general reference blacks as “my people” or a Supreme Court justice spouts off neo-eugenicist riffs, they must be contextualized and explained as off-the-cuff musings not comparable to the felonious biases of an obscure private cowboy on the Nevada range.

Spare us the bottled piety.